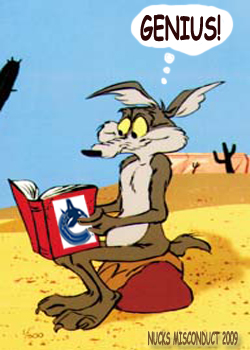 There's a lot being said right now about a turn around happening in Arizona.  That despite moving out Ilya Bryzgalov and Ed Jovanovski, they're playing some solid defensive hockey right now.  That's nice.  And good on Mike Smith, who's having a fantastic start after fumbling opportunities in Tampa Bay and Dallas.  Call me a bit of a pessimist, but this is nothing new.  Perhaps it's because of the extremely low bar the Coyotes have set for themselves over the years, anytime they get above the playoff bubble, it seems everyone lines up to proclaim change is on it's way to Phoenix.  How has that change turned out every single time?  This team hasn't won a playoff series when they've been able to make it.  And that's the only measuring stick that matters.  And let's face it, if you can't score a lot of goals in the NHL, you will not succeed.  When I look at these desert dogs, I don't see something that should fill any defence with fear...

Okay without cheating, can you name Phoenix's leading scorer?  I sure as hell couldn't.  Apparently it's Radim Vrbata.  Ray Whitney has appeared to have found the fountain of youth and is having himself a fine lil season, but the drop off is quite sharp after these two, Shane Doan, Keith Yandle, Martin Hanzal and as Sean mentioned Boyd Gordon being the only Yotes in double digits for points.  They're not scoring a lot, and getting some stellar goaltending from Mike Smith.  And yet with a goalie with a 10-3 record, you'd think that they'd be a mile ahead in the standings, right?  No it's only 2 loser points that separate the Coyotes from the Canucks.

In the midst of all the hand-wringing about the Canucks of late, their record is definitely improving and their efforts becoming more consistent.  Just 4 losses in their last 11 games, and while we are familiar with how those losses went down, we're starting to see more of the Canucks that we saw on Wednesday night in Colorado.  Ryan Kesler, Alexandre Burrows and Manny Malhotra all broke out of scoring slumps, and the team did something that hadn't happened yet this season: winning while the Sedins are held scoreless.

The Canucks have slowly begun to get back into playing the kind of hockey that took them to the top of the standings last season, and much like last season they're going to have to do it with some help from the farm.  The Canucks could be without Keith Ballard, Aaron Rome and Kevin Bieksa tonight, as all are banged up with various ailments.  As I am writing this I can't find confirmation of who's in and if there will be a call sent out to Chicago for some help from the Wolves.  It also looks like we likely won't see Mason Raymond return to the lineup until the Canucks face the Columbus Blue Jackets at home next week.

Well, I have to call a big, fat fail on the part of the NHL for having ZERO games scheduled yesterday.  It's understandable that the league didn't want to compete with tv viewers watching football and a new Charlie Brown Special, but the lost opportunity of a chance to throw some all-Canadian matchups on for us is baffling to say the least.  Why, it's almost like Gary Bettman doesn't care about Canadian hockey fans...  So we just got word that New York Rangers Andre Deveaux got a 3 game Shanaban for his elbow the other night, proving that unlike the Oilers' Andy Sutton, he's not an expert when it comes to dirty hits.

BAND OF THE DAY- CYNIC

Quite simply one of the most daring bands out there when it comes to pushing the boundaries of what we know as metal, their compositions of jazz-fusion metal are as baffling as they are breathtaking.  Here's the title track of their latest EP 'Carbon-Based Anatomy', as well as a couple favorites of mine from their previous releases.  From virtually creating a sub-genre with their early technically stunning death metal to the nearly undefinable current focus of their work, Cynic are in a class unto themselves.