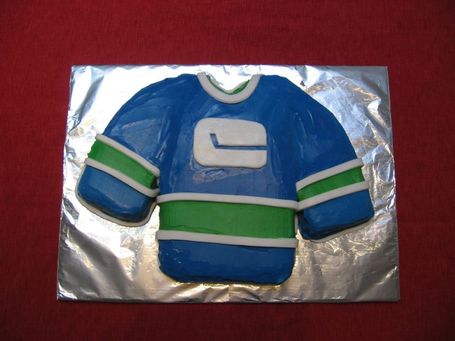 Many times on this here interwebs us Canucks fans have bemoaned how the Canucks regularly and uncannily surrender goals in the last 10, 5 or 1 minute of the third period in games in which, prior to that point, they had been posting a shutout.  It does not seem to be a Luongo thing, it does not seem to be a Schneider thing (unless it’s weirdly a thing for both of them separately), it seems to be a team thing.  The good gentlemen at PassItToBulis have dubbed this tradition the "snack goal".  I don’t know if this is a uniquely Canuck experience, since I don’t really follow any other team, but I had a look at the numbers for the Canucks, and clearly this phenomenon is not imagined.

Here’s what I found, looking at the 119 games that make up last season (including playoffs) and this season combined:*

15 Total potential shutouts with 10 min left in the 3rd

2 Shutouts lost in last 1 min of the 3rd

4 Total potential shutouts with 10 min left in the 3rd

0 Shutouts lost in last 1 min of the 3rd

So in games that are shutouts up to that point, since the beginning of 2010-2011 and including playoffs, the GAA for the Canucks is as follows:

Compare these numbers to a total GAA (which includes this subset) over this same period of approximately 2.35.

Granted, one should take into account sample size, the fact that scoring may increase in cases where the other team pulls their goalie, blah blah blah blah blah blah.  Shutup, ok?  The point is, these numbers are clear: over the last 119 games, relative to how good they have been at keeping pucks out of their net generally, the Canucks sucked at keeping the puck out of their net late in the third when posting a shutout.  The snack goal is real, and it's generally delicious anyway since we still get the win, right?

*note: I only looked at games in which the Canucks had a shutout or let in 1 goal in regulation.  It is possible that there were games in which they let in 2 or more goals in the last 10 minutes of the 3rd when they had not let in any prior, in which case these numbers would clearly skew worse, and strongly so.  But I don't recall any such games.