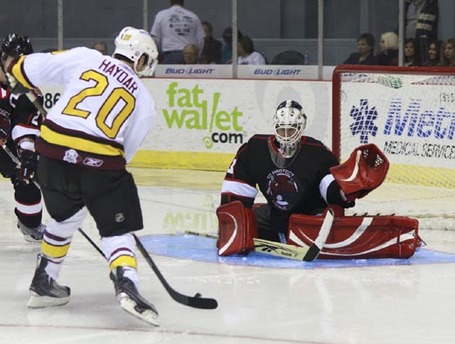 It's been a good week to be a Chicago Wolves fan. In what would have previously taken 5 games to do, the Wolves goals tossed up 10 goals – albeit three empty netters - in just two games and were victorious in both of their road games.

On Tuesday the Wolves played a 9AM game in front of 125 bus loads of schoolchildren against the Bulldogs in . It was obvious from the start of the game that they were playing with more energy than usual, the shot totals weren’t even close after the first period (17-5 Wolves) and with a pair of goals from Tim Miller, the Wolves ended the 1st period with a 2-0 lead.  ’s coffee kicked in during the 2nd and 3rd periods and the game was played a bit more competitively but Bill Sweatt and Darren Haydar tacked on two more goals for a 4-1 win.  Darren Haydar, playing near his hometown, had a 4 point game and Matt Climie turned aside 26 of the 27 shots he saw.

Saturday night the Wolves played in Milwaukee and scored more in one game than they had all season, but in my eyes the game wasn’t as much of a blowout as the scoreboard showed, it was 4-3 wolves in the 3rd and the Admirals pulled their goalie and wound up allowing two empty netters to make it 6-3.  Kevin Connauton was the offensive standout in this game, scoring two goals and showing that he’s not afraid to jump into plays in the offensive zone.  Matt Climie got the start again and saved 34-37 shots.

As far as Eddie Lack not playing this week, I think MacTavish is just riding the hot hand, Climie’s on a 3 game win streak and has the 2nd best save percentage in the AHL.

Player of the week – I’ve been trying to keep the player of the week to Canucks prospects only, but this week Darren Haydar was far and away the best player with 1-5-6 totals through two games.  He’s leading the team in points this year (5-9-14) and I think he’s been a great mentor to the guys in the clubhouse and on the ice.

All in all, the Wolves are on a three game winning streak, they’re keeping the opponents goal totals low, and they’re starting to score a bit more themselves. With the longest road trip of the year coming to an end, I’m hoping the wolves can make a run to the top of the division in the coming weeks.

Coming up this weekend is another tough game in on Friday night, followed up by a home game against who now have the services of Florida Panthers top goaltending prospect, Jacob Markstrom.