I'm not sure whether or not last night's game against the New York Islanders really qualifies as Cody Hodgson's breakout game, but, statistically, it's been in the cards for a while.

While Aaron Rome is earning a whole bunch of talking points this morning, it was Tony Gallagher who chose to write about Hodgson for the morning papers:

And after all the negative poking that has surrounded him as he's come up in this organization, you had to feel good for the guy now that he's firmly established as an NHL player, one who appears to be comfortable in a lot of different roles with any type of linemate.

I'm usually one to disagree with Gallagher, but you have to certainly feel that Hodgson has established himself on this team. Maybe he's not quite the second-line centreman that we all envisioned when he was picked and played in those World Juniors, but he's become a very versatile player that Alain Vigneault can platoon up and down the lineup.

Last night, the Canucks had 12 scoring chances. For those newer to the concept, a scoring chance is generally regarded as an unblocked shot taken within this area: 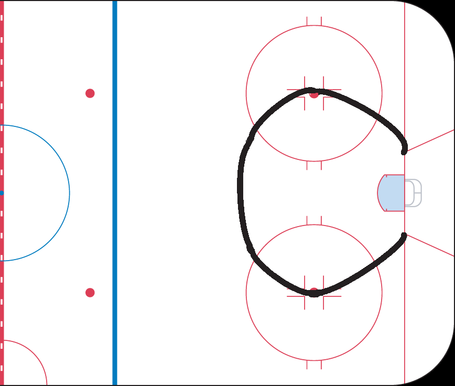 Blocked shots only count as scoring chances in a situation where the defenseman acts like a goaltender, and I've only recorded one instance of that happening: at the end of the first period last night.

But that's beyond the point right now. The Canucks had 12 scoring chances, and, when I count, I also like to record who took the shot, and also, which player set up the scoring chance. I define setting up a chance as a clear, attempted pass to find a player in space.

So, of the Canucks 12 chances, seven of them were set up by another player, therefore 19 players were involved in 12 different scoring chances. Cody Hodgson and Ryan Kesler led the team, being involved in four apiece. (And there's The Noon Number).

This was one of Hodgson's stronger games as a Canuck. He was a +12 Corsi, meaning 12 more shots were directed at New York's net when he was on the ice as opposed to against his own, and, while we might bicker about the "quality" of those shots, Hodgson was the only Canuck forward to be on the ice for more scoring chances for than against at even strength, with 5 for, and 4 against (overall, the Canucks lost the battle at evens, due to the fact that they failed to generate good shots off of excellent opportunities in the first two periods when they dominated the play).

He scored a goal, too. He isn't on pace for 20 goals anymore (18.2 after last night), but he's kept his shot numbers high at 2.71 per game and is consistently plugging along as quietly, one of Vancouver's better players.

Also, John and John, the "G" is silent. It is pronounced "Hod-son".