Regardless of your views, we should all take a moment, not just at 11 am, but throughout the day to remember the tremendous sacrifice of the men and women who gave their lives in defense of freedom for our country.

So many different story lines from that game last night, what a shock that it happened in the entertainment capital of the world, right?  From a ferociously played 1st period, where the Canucks pounced on the Kings and their lack of discipline early, scoring 2 power play goals after Trevor Lewis and Drew Doughty took a pair of ridiculous penalties to give the Canucks a 2 minute 5 on 3.  Add in another boomer from Aaron Rome (and the absolute robbery of his 2nd when it was waived off), the lack of a 2nd period letdown, an odd 3rd period letdown, and an injury to Andrew Ebbett after what was his best game as a Canuck and last night wasn't lacking for excitement.  For as much as the Kings have struggled of late, it's been that way from the get-go for the Ducks.  So how to make this one as exciting?  I have some ideas after the jump...

1- With Alexandre Burrows likely to return to the lineup, he can see how many chirps it takes to get Teemu Selanne to lose his cool and freak out again, because that's part of what's making the Selanne farewell tour special: His evolution into that of a grumpy old man.

2- Tip Ryan Getzlaf's lid off as often as possible. 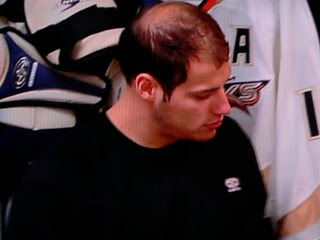 3- Get the Ducks to take foolish, undiscipli... oh, right.

So why are the Ducks struggling so bad?  It's hard to put a finger on it.  They've got a good chunk of the same team that made the playoffs last season, and that includes G Jonas Hiller.  One of the reasons can be found when you look at their team stats.  This is a team that should be scoring goals by the bucket, but after Selanne and the big line of Getzlaf, Corey Perry and Bobby Ryan, the offence is nearly non-existent.  Throw in some just average goaltending, and it's a recipe for disaster.  Some Ducks fans are starting to panic, and while it's still early, a prolonged losing streak in the much more competitive Western Conference this season could spell a team's doom even this early on.

Alain Vigneault has announced he will play Roberto Luongo tonight, which is a bit of a surprise.  Not entirely hating this, Lu seems to finding his groove, and plays well when he gets lots of shots, something you can always count on from the Ducks.  He did play last night however and hopefully fatigue won't be an issue.  While the Canucks will welcome Burrows back from back spasms tonight, they will be without Andrew Ebbett, who was seen in a walking cast today.  Shame to see him injured after a really strong game last night.

Here's hoping the boys put together another solid effort tonight.  I disliked the sitting on the lead they did in the 3rd, and hopefully they will avoid such nonsense, especially against a team like Anaheim.  They've got a ton of offensive weapons that are due for a breakout, always seem to play the Canucks well, and quite frankly will have a chip on their shoulder.  If they can stay disciplined, they have a shot of bumping their slump.  If they play normal Ducks hockey?  The Canucks PP will eat that porous defence alive.

Seriously, can anyone watch a Columbus Blue Jackets game now without feeling really sad for them?  It's just gotta be bloody awful for their fans.  Hopefully they can turn it around in Quebec City... And there is much frivolity in Chicago today after their 6-3 win over the BJ's, partly due to their notching 2 power play goals.  The problem?  They gave up two.  To Columbus.  Their special teams issues aren't fixed if that's the best you can do against the worst team in decades in the NHL... Boston stomped the Oilers 6-3.  Let's all take a moment to try and figure out why Devan Dubnyk got the start against the defending champs instead of oh, I don't know... the league's top ranked goalie?  Ridiculous... Our pals over at PPP are having quite the bipolar season with goaltenders, aren't they?  While there's still no word on when James Reimer will return from 'concussion-like symptoms', they got some pretty decent netminding from Ben Scrivens last night in a 3-2 SO win over the St. Louis Blues...  And the Canucks next opponent?  Was that not a brutal coughup of a 3 goal lead to let Colorado come back and win in OT?  Good lord... this means I expect them to kick the Canucks' asses on Sunday...

BAND OF THE DAY- BOLT THROWER

In honour of Remembrance & Veterans Day (and because it's also National Heavy Metal Day) here's some appropriately themed music from one of grindcore's originators; Bolt Thrower from the UK.