And Boom Goes the Dynamite (Now with less content)

Sorry boys and girls. Imagine I am the October Canucks, and this post is the first 20 minutes of a game against an average team. Which if you've guessed correctly, means it won't be up to my usual standards. I am erratic these days due to work and the infernal Province contest that has me slaving away at my computer all day. So alas I do not have a witty intro paragraph, nor do I have any fun pictures to share with you. I will have a pretty cool article to post on NM later today that will be featured in the Province, so keep an eye out for that. Sorry guys! I wanted to at least do one post so there could be some early morning discussions, so I will toss out some links and let you guys go to work!

I will leave you with a joke, though. I googled "funny joke" and this was the first one to come off. Please don't accuse me of sexist jokes again. I haven't recovered from the last time that happened.

"Bob was in trouble. He forgot his wedding anniversary. His wife wasreally pissed.She told him "Tomorrow morning, I expect to find a gift in thedriveway that goes from 0 to 200 in 6 seconds AND IT BETTER BE THERE !!"The next morning he got up early and left for work. When his wife wokeup, she looked out the window and sure enough there was a boxgift-wrapped in the middle of the driveway.Confused, the wife put on her robe and ran out to the driveway, broughtthe box back in the house.She opened it and found a brand new bathroom scale.Bob has been missing since Friday."

Also I googled "funny hockey" and got this: 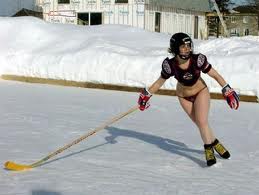 Lingerie hockey. I think it's time is now to fill the gap that the NBA has left behind. (Please don't hate me ladies).
Vancouver Canucks News:
NHL News: