Last week the SBN Western Conference team managers took a quick vote to see who ranks 1-15 heading into the start of the regular season. The final totals and average scores are below:

...and people claim the Northwest was the weakest division in the league. Pish posh.

After the jump we'll look at the four teams that round out the top four and how Vancouver should stack up against them once this stuff starts counting for real in 24 hours. 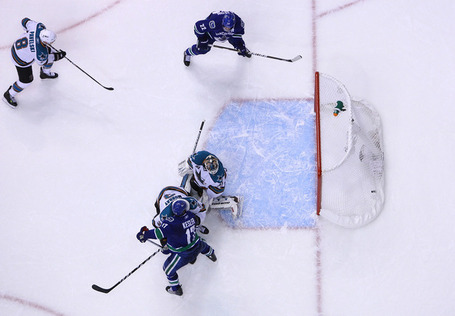 San Jose Sharks - Remember last summer when most media outlets got all hot and bothered about how the Canucks looked on paper due to their offseason moves? Those accolades belong with San Jose now and for good reason: they pitched away Dany "no seriously I can score" Heatley and Devin "no seriously I can grow facial hair" Setoguchi and Minnesota giftwrapped Martin Havlat and Brent Burns in return. The addition of Burns makes their defense remarkably well-rounded. Up front is no picnic either: Havlat will join the likes of Couture and Clowe while the Thornton line will remain dangerous as always. Niemi and Niittymaki together are plenty confident to keep the puck out of the net.

Understated Summer Move: Michal Handzus. I've had a man crush on him since his Philly days. He won't be confused with Malhotra, but Handzus will help them on the PK and (incoming bias alert) is a better fit for that team than Kyle f'ing Wellwood (speaking of which, has he slagged on San Jose since he wasn't invited back or does he do his trash-talking only during the regular season?).

How Vancouver should stack up against them: Heading into the playoffs last year the conventional wisdom suggested it was their depth on offense verse Vancouver's on defense. I think that still holds true but I think Vancouver's speed can continue to cause them headaches, especially as you move away from the Boyles & Murrays of the world. Vancouver also saw how effective their PP can be, so it's not in their interest to parade to the box as they accustomed to doing. Regardless, these are the games you should definitely circle on the calendar as  the teams usually put on a good show. 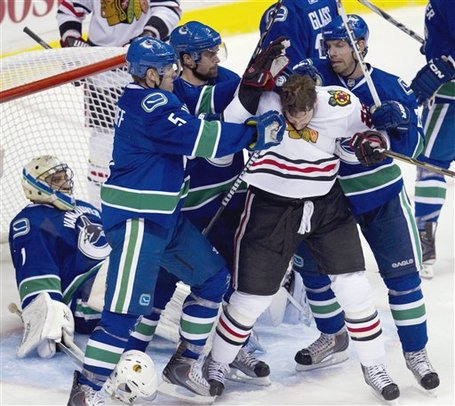 Chicago Blackhawks - Say what you will about his salary, but losing Brian Campbell hurts. Campbell, I thought, was their best defenseman during the first round and his loss is the Western Conference's gain. That said Chicago remains a strong, deep team. Not nearly as mind-numbing as two seasons ago, but Toews, Hossa and Kane remain the top threats, Bolland does he part extremely well and they have some others in the mix - Frolik, Olesz, Lepisto - that will make them a pain to play. I suppose it's around here I'm supposed to mention Carcillo, but whatever...Vancouver picked up Weise yesterday, so checkmate madhouse.

Understated Summer Move: Steve Montador. He's not a sexy pick to replace Campbell, but he's cheap and should be quietly effective on the second pairing. Remember when Montador was rumored to end up in Vancouver and we were all pleasantly happy? Just forget that forever now.

How Vancouver should stack up against them: I think Vancouver stacks up pretty well with the Hawks no matter what style of game unfolds: the run-and-gun or the conservative, sit-on-the-lead scenarios. However Chicago's biggest threat remains their ability to score and, as Roberto Luongo knows, that can happen in bunches. Don't miss these games either. 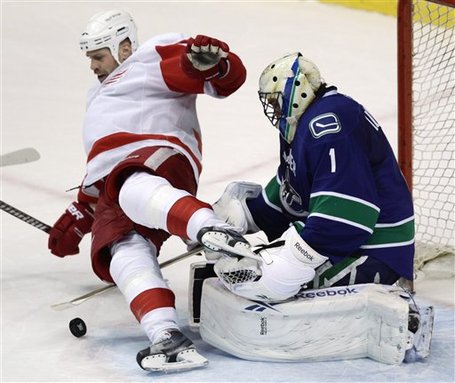 Detroit Red Wings - Like Campbell with Chicago, the Wings will miss Rafalski. I actually really like Ian White as a replacement, but no one will be confusing him with #28 either. Lidstrom is back for his millionth season and will head a defense that has heavy hitters from Stuart to Kronwall to Commodore now (ATTN VAN forwards: keep your skulls on a swivel please). Up front you have the same cast of characters from last season, seemingly only losing Modano and not much more.

Understated Summer Move: Letting Modano retire? Signing Fabian Brunnstrom? No no...I'll go with Patrick Eaves (can you get more understated than Eaves?) He signed a new three-year deal over the summer and gives Detroit a responsible, young grinder at a low price. Sort of like Jannik Hansen just less Danish.

How Vancouver should stack up against them: Vancouver typically has problems with Detroit's top guns (unless Andrew Alberts is around to blow up Datsyuk) so keeping them off the board is the issue. Luongo usually plays well against the Wings and I hate to be the zillionth person to mention it but they have a good number of players who are simply galloping towards the sunset. Doesn't mean that the Wings don't belong in the top five nor that they won't be as threatening as last year, but as the game progresses the fresh legs usually win. So again a speedy Vancouver defense and good transition/board work should make for some interesting third periods. 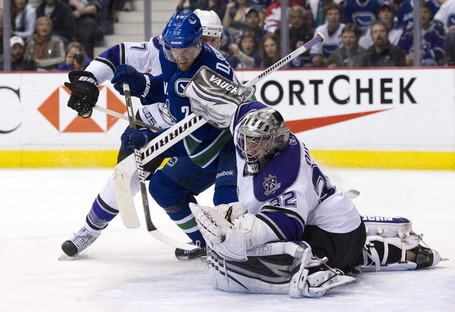 Los Angeles Kings - Most of us who follow the NHL closely have been waiting for the Kings rebuild to finally pop. It has flirted with this jump the past few seasons but this summer may have catapulted it way over the line. LA is ridiculous down the middle (Richards, Kopitar, Stoll) and their wings are more absurd (Gagne, Penner, Brown, Williams). Doughty and Mitchell lead the defense in front of Quick who had a fantastic season last year. They even managed to dump Smyth who, like him or not, never seemed to fit in La-La land. About the only thing you can hold against them is their cap situation but the Kings just made the Pacific an even nastier road trip that previously anticipated.

How Vancouver should stack up against them: As much as I like their forwards, the loss of Handzus and Simmonds makes their bottom six weaker to my eye. Ethan Moreau is not an answer to that problem, but similar to Vancouver, their bottom lines could be a rotation of auditions on a monthly basis. Doesn't make playing them any easier: VAN and LA usually team up for low-scoring affairs, but that may change quickly if their sudden depth up front is allowed to flex its muscle too often. I'm definitely interested to see if the preseason hype for the Kings will come to fruition.

One last point to these top five: the divisional battles take a chunk out of everyone but Vancouver. Just like a good Chicago team had to slide assbackwards into the playoffs last year, that could be Detroit this season. The Central is filthy and the Pacific just got worst. I know we've debated the divisional advantage before but it seems more stark now. Not that I'm complaining: it wasn't long ago we had to deal with the Sakic's and Forberg's destroying us on a regular clip, but it magnifies the importance of not coughing up points to Edmonton or Colorado because it may be slim pickings when the other folks in our conference family show up.