Share All sharing options for: Canuck Brunch- The Russians Are Coming!- October 29 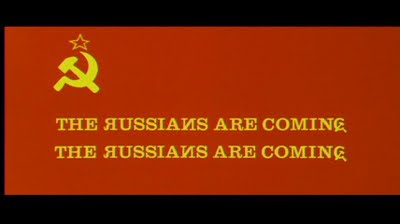 Okay, so maybe there's only a couple of them, but out of the gate this season, the Washington Capitals have been mowing down their opponents much like the fabled Big Red Machine of the Soviet Union.  And while the Caps have been picked by some to take it all this year, one can't help but wonder if their start is perhaps something you should take with a grain of salt as much as the Canucks stumble in theirs.  After all, they got their roadtrip off to a flying start making the Oilers look good last night.  Is it another case of a Beast From The East looking more like The Mouse That Roared when they hit the West Coast?  What can we expect tonight?  Which team, coming off somewhat embarrassing losses to the Oilers (and the St. Louis Blues, in the case of the Canucks) is going to be more pissed off?  Is David Booth going to score this season?  Will Mark Lee find a way to hack into the broadcast, cutting off Jim Hughson to reference Ryan Nugent-Hopkins?  Is Alexandr Semin going to go all bongos on someone?  Will someone finally have the courage to go over to the dork with 'Occupy Luongo' signs and get him to un-occupy his seat?  Answers to these and other ridiculous questions after the jump...

The Capitals and their 7 game win streak to start the season was certainly impressive, but they only really started looking dominant in the last couple games.  The first four saw them win twice in OT, once in the shootout and then a 1 goal win over the Ottawa Senators.  It wasn't until the 3 goal victories over Florida and the Flyers, topped off by a 7-1 slaughter of the Detroit Red Wings that they really looked like a juggernaut.  So what to make of the 3-1 loss last night to the Oilers?  Taking a night off and underestimating 'the Kidz'?  A hot goaltender they don't see often shutting them down?  Or just more of a case of some Eastern teams not able to handle Western opposition?  Probably a little bit of all of these.

And what of these Russians?  This was the year we were supposed to see Alexander Ovechkin reclaim his dominance over the league.  So far, as he sits 63rd in scoring I would say that's not exactly living up to the hype.  Don't get me wrong, even when he's lackluster, he's very, very good.  But this is more the Ovechkin of the last couple seasons.  Mr. Big?  Hardly.  I suppose for Caps fans it's hard to complain when your team is off to such a strong start, but they'll need him to be at his best to succeed.  Speaking of Russians who aren't living up to their hype, Alexander Semin is a very skilled hockey player who quite frankly doesn't seem to give a toss (my apologies for the bad pun, but you gotta take them when you can, right?), showing up now and then, disappearing for long stretches of time.  If they even got 70 games of effort from him, they'd be a far scarier team.

One of the most noticeable differences with the Caps?  They did something about their Achilles Heel and got themselves a legitimate Number 1 goaltender in Tomas Vokoun.  He seems to be enjoying his exile from Florida, but one wonders if the Caps plan to ride him as hard as they have out of the gate.  Vokoun will start again tonight despite playing last night in Edmonton.  Seems to me like a perfect opportunity to give Michal Neuvirth a game (or last night, for that matter), but what do we know, right?  Only Bruce Boudreau knows what's going on inside that large, red, mustard-stained head of his.

And while some of the games against Eastern opponents seem to lack the kind of animosity that can make for a magical night on the ice, this one could have a little spark as our old pal Troy Brouwer is now a member of the Capitals.  Enough of that sentimental crap about "oooh, he's a hometown boy!".  He was a member of the Blackhawks.  He, and all the rest of the 'local' opposition should receive no more than a passing mention, and if anything get singled out for punishment on the ice.  So let's make sure Mom & Dad Brouwer have nothing to cheer about tonight (although I am sure they're wonderful folks).

Meanwhile, the Luongo noise has died down somewhat thanks to the Canucks going out of their way against the Oilers, demonstrating to our fans that the team's gawd-awful play might be more to blame than just our Number 1 goaltender.  Neither goalie has stood out, and apart from a bucket of points for the Sedins there's not been much to cheer.  Defensively this team needs to get back to basics, stop leaving our goalies hung out to dry and most importantly play the style of defence that looked so good last year.  The balance of jumping in the rush, and containing opposition threats to the outside worked wonders.  This year, they have been jumping up with the worst of timing, giving up odd-manned rushes galore.  Add in the seemingly constant defensive coverage lapses, and why the Canucks find themselves where they are is hardly a mystery.

We've heard from all the Canucks re: the slow start, frustration, etc.  Tonight, the first signs that this team is ready to make it's way out of this funk.  Things will start clicking.  The mental errors will begin dissipating, and this team will begin to show, against a team some think will challenge for the Cup, that they can certainly do well against.  Add in a goaltender with something to prove against a team you can say he's done very well against, and things are actually looking pretty good for the boys in Blue tonight.  And did I mention no Mark Lee?   Also, if you have time you might want to check out the pregame report from Russian Machine Never Breaks.  They say some nice things about Vancouver and Ryan Kesler, but lose points for using the same 'creepy girl twins' picture that's been used in every post about the Sedins when they realize there's not much in their game to be criticized without lying or looking foolish.  And my Nucks Misconduct Sarcasmometer (tm) was going off when they referred to us as 'geniuses', but being Canadian, we'll just politely thank them for the compliment and offer them a timbit.

One hearing today, and another one Monday as the Shanahammer is back!  Douchebag extraordinaire Daniel Carcillo is meeting with Brendan Shanahan today about his shove from behind on Joni Pitkanen of the Carolina Hurricanes.  Carcillo didn't receive a penalty on the play, though it should be noted that the Blackhawks lost 3-0.  It has nothing to do with the incident, but it does make us smile.  Meanwhile, Edmonton's resident Expert Andy Sutton is looking like he will be an expert on losing a big chunk of his salary.  He'll be in New York Monday to explain why he thought it was a good idea to elbow the Colorado Avalanche's Gabriel Landeskog in the head.  As a repeat offender, it's pretty clear that Sutton is gonna get the book thrown at him, already Sutton's been told he cannot skate in Sunday's match against the St. Louis Blues.

BAND OF THE DAY- REVOCATION

A fine mixture of death metal and thrash colliding like a f'ing freight train is a great way to describe the most recent release from Revocation.  Now they're a great band, but I do have to deduct points for them being from Boston.  Sorry, that's just how we roll.  Anyways, check out 'Cradle Robber' from 'Chaos of Forms' on Relapse Records.