Share All sharing options for: We're Not Alone - Canucks vs Blues Gamethread 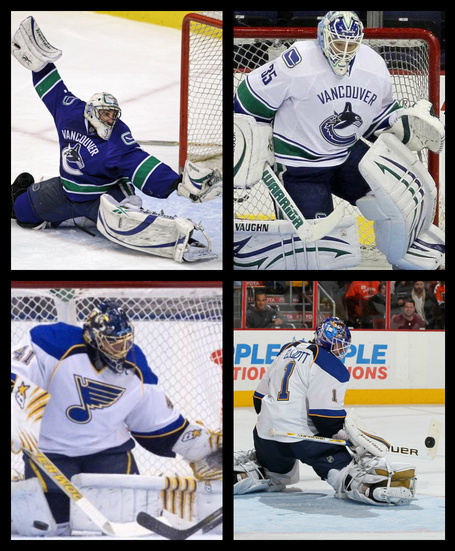 Okay, so we got another defensive crash last night. Thank god we were playing back-to-backs, because I probably wouldn't have been able to stand all the Roberto Luongo talk again. (Not that it was entirely his fault for those 3 goals the other night, but the haters will hate.) AV is "sticking with the original plans", putting Cory Schneider in net tonight. This will likely lead to Luie getting a chance to play against the Capitals on Saturday. I have no problem with this move, it's always fun to see Luie pull incredible saves on the likes of Alex Ovechkin.
Meanwhile, our opponent tonight proves that we're not the only team with goalie issues. From the Blues website's own game preview:

Brian Elliott, who stopped 34 of 36 shots in Philadelphia to improve to 3-0-0, is beginning to challenge starting goaltender Jaroslav Halak for time in net. Halak, the unquestioned starter at the beginning of the season, has lost four of five starts with an .835 save percentage and a 3.47 goals-against-average in that span.

Well, it's obvious that both teams are in similar boats. In St. Louis's case, I was reading earlier that the skaters were, for some reason, doing a better job helping out Elliot than Halak. I think we might have a similar issue here. Anyways, tonight is the battle of the backups, which is a lose-lose situation: winners have a backup challenging for a starting role, while losers still miss out on 2 points. Let's get bombed together!