And Boom Goes the Dynamite (Now with more fancy videos)

Share All sharing options for: And Boom Goes the Dynamite (Now with more fancy videos)

Well the weekend is over. I wouldn't know it since I've been slaving like a dog trying to catch on with the Province people, but I guess some of you relaxed over the weekend. For those of you who were away and missed out my two videos, scroll down the main page for some Stanchion video goodness.

The big news over the weekend of course was the Booth for Samuelsson trade, a trade which readers from Fear the Fin call "The greatest trade since defenceman Wayne Gretzky was traded for that exciting winger Foldgers Coffey". I am sure we are all excited about seeing how Booth does on a line with Kesler, and since every single Canucks blog in creation already covered David Booth's entire career for you, I am going to go ahead and move on to the usual EMBRACE THE HATE comments from TSN.CA and the Canucks game on Saturday. Why? Because it amuses me and because yes, it fills up precious space. Precious space I normally ear mark for Aaron Rome jokes. Thus shows the double edged nature of Aaron Rome. I hate having him around, but I need him around to make fun of him.

- HEY! Luongo is the BEST bench warmer in the league, and I won't hear otherwise! Nobody does bored relax face better than Luongo. NOBODY.

- I like how Swedish Captain, besides being uncertain about his title, thinks AV is making Kesler dive out there. That if we got rid of our Swedish captain and coach, that Kesler would finally be unshackled from all that is holding him back in the world. It sounds like the making of a great Disney movie.

- Ha, ok, that was a well played joke. Until I see it every game and then I will never admit to chuckling to it.

- Ah yes, we are still on the goal differential as being a major indicator of the Canucks weakness. I understand the idea that more goals scored vs goals against is a good sign overall of a teams strength. Sounds good to me. But when you have the President's Trophy winning team from last year 6 games into the new season, I'm going to go ahead and guess that this sample size is probably just a tad too small to be making any such observations.

- Oh good god. You know some Canuck fans have lost their mind when they suggest bringing Crow back. Though I will give Crow credit, nobody was better at calling out the "Too Many" penalties than him.

- Wait....1..2..3...4..5....Yup, they used 5 of the Canuck stereotypes in one post. Impressive! They also nailed good use of exclamation marks. I do dock some marks for not bringing up the word "class", however. Almost a perfect mark though.

- We do? Is this in regards to Booth? I assume it is? Is this an American joke? I'm sure it made sense to the guy when he posted it, but he probably had a cousin to sleep with so he didn't have time to finish his thought.

- Ehrhoff this year is minus 1. Salo is +5. Small sample sizes, but I am pretty sure Buffalo didn't sign Ehrhoff for his solid two way game... And I hope the Canucks teach Salo how to file for his pension. That is just smart planning.

- Damn those declining Canucks and surging Wild trends. It's just unfair for the rest of us to have to post on TSN when they already have the guy with all the answers. 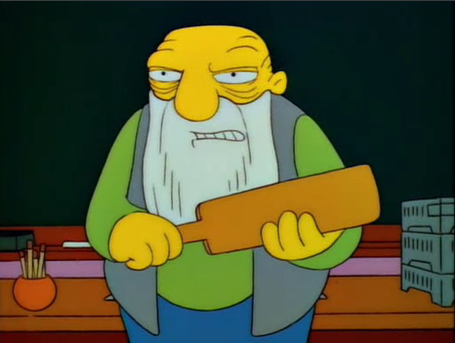