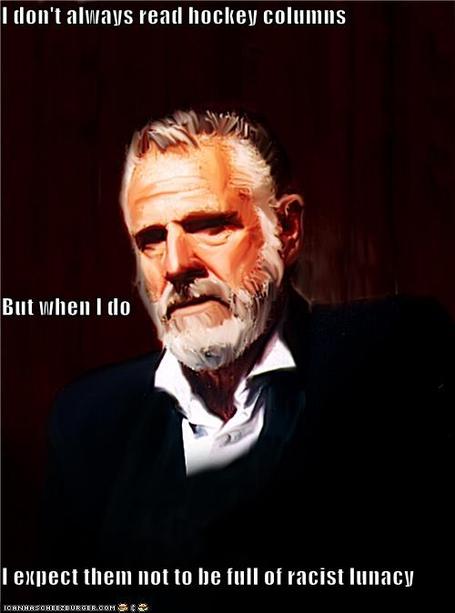 Seriously, it's like they don't even want us to be able to write about what's happening on the ice, isn't it?  It was a rather intense off day for the Canucks yesterday, as we saw our old pal Mark Spector take another late, piling on-style cheap shot at Canucks fans.  His attacks on the team and it's fans have become so common in his columns that it was hardly a shock.  What was shocking about his rant, which some praised as having truths in it, was the outright xenophobic garbage he spewed, implying the Canucks lost the Stanley Cup due to all the Swedes and Danes they drafted rather than good, homegrown local boys like Milan Lucic.  Forget that the Canucks draft history shows you that his theory is a flat out fallacy.  It's the insidious, racist, and intellectually dishonest way he makes you think he's defending Luongo and chewing out the fans, when the real focus of the article is to once again take shots at Canucks players.  And sorry Mark, but there's absolutely nothing in your article where you call out the fans that hasn't been said by this and other blogs in the Smylosphere.  So on behalf of this, and all the other blogs, and Canucks fans in general you can take your 'open letter' and stuff it.  We've got no time for douchebags like you.  We're supporting our team as they prepare to finish what they started last spring.

Afternoon games.  What a novel concept.  I really dig this, as someone who lives on the island.  What a treat for people from here to actually not have to get a hotel room for the night just to support the team.  Since BC Ferries keeps Islanders under lockdown after 9pm, this is awesome and I hope the Canucks do more of this.  Today they take on a Minnesota Wild team still square in the middle of their deprogramming from the Cult Of Lemaire days.  And while they're off to an okay start, it's going to take more than adding Dany Heatley and Devin Setoguchi to fix the problems in Minny, especially when you consider they had to part ways with Brent Burns on defence.

The Wild have a decent enough goaltending tandem in Niklas Backstrom and Josh Harding, but defensively they are somewhat lacking, and as always, struggle to score beyond what their first line can produce.  Add in the Canucks going 8-0-1 in their last 9 at home against the Wild, and given the energy and emotion the team seems to have found in rallying around Luongo (yeah I know Cory Schneider is starting today, but this whole incident seems to have been a wakeup call for the Canucks), I feel confident in predicting a win for our boys this afternoon.

So we can enjoy a nice afternoon of beverages of the malted variety, some (hopefully not boring) hockey and then wait for the next shots to be fired in the war that has erupted between Canucks GM Mike Gillis and the Vancouver Province.  This one seems like it's gonna make the wars Brian Burke and Pat Quinn used to have with local media look tame in comparison.  Gillis made a surprise call to the Team 1040's afternoon show, which left hosts Barry MacDonald and Don Taylor scrambling at times, seeming almost reluctant to talk about the Province's jaw-droppingly ridiculous editorial, suggesting the team absolutely must jettison Luongo to Tampa Bay for Vincent Lacavalier, all to appease the handful of fans who jeered Luongo during the 4-0 shutout of the Rangers.  That was followed by Province Editor-in-chief Wayne Moriarty taking a few shots back at Gillis (Puck Daddy has an excellent recap of the whole thing here).  Moriarty makes a couple good points, but his allegation of 14000 of the 18000+ fans at the game booing?  I think anyone there, or who watched it on tv would tell you that seems a bit of an exaggeration.  I appreciate the fact that the media needs to be independent and critical of the team, not just spew out propaganda.  But this kind of tension and tense working environment it seems to be developing into could become a distraction.  And lord knows, this team has enough on it's plate in that department.

BAND OF THE DAY- HAVOK

These Colorado-based thrashers have put out one of my favorite albums so far this year.  Great tunes featuring some razor sharp riffs, laden with hooks I keep going back to... here's the title track from 'Time Is Up', and a track dedicated to our pal Spec...