Where Are The Chill Pills? Canucks vs Predators Gamethread

Share All sharing options for: Where Are The Chill Pills? Canucks vs Predators Gamethread 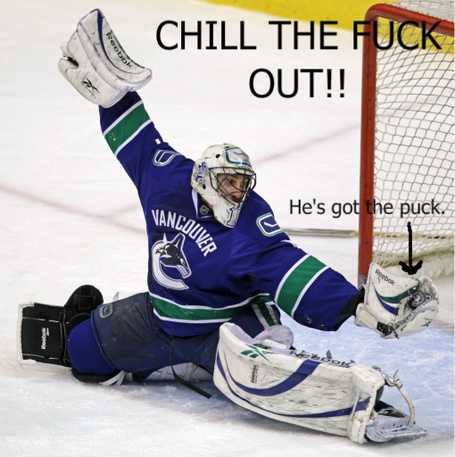 7:00 pm PDT, SNet-Van
Enemy territory: On the Forecheck
Enemy pro: The Predators are having a similar season start to us
Enemy con: Pekka Rinne is really good.

Sorry, but I need to vent, since the haters have invaded the media. As soon as Roberto Luongo has a couple rough games to start the season, the guns come ablazing. For some reason, none of these people seem to remember how our last few seasons have started. Last year, we finished October at 4-3-2. 2009 was 5-7-0, and 2008 was 6-5-0. All these rougher starts were followed by strong winters that have allowed us to win 3 straight NW titles and a chance in the Stanley Cup Finals. Right now, we have only played 6 of our 11 games for October 2011, going 2-3-1, and you're already losing it? You all just need to take a chill pill. As for Luongo, he is still one of the best goaltenders in the league. Have a little patience, he'll find his game, as will all his Canucks teammates.