Share All sharing options for: Canuck Brunch- The Blame Game 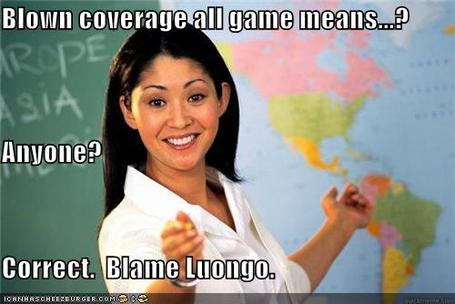 It's in full swing now.  TSN hasn't stopped talking about it, it's all over Twitter as fans and non-fans alike weigh in on the amount of abuse being hurled at Roberto Luongo right now for the Canucks slow start.  And for a lot of fans, it's already taking a toll.  It's way too damn early in the year to be dealing with this kind of negativity.  But it's here, and it's not going away.  So I figured, if they're gonna bitch, I should at least make it fun for them.  So with apologies to Shirley Ellis, I wrote a lil song...

Here's how to play along.  First, click on the link above, which is a karaoke version of Ellis' song 'The Name Game', but sing along with these new lyrics I have provided.  There's a spot at the beginning where you're supposed to do a couple names before they teach you how to sing the song (logical, right?).  Instead, just do this dance until it's time to start the first verse.  Ready?

Come on everybody!
I say now let's play a game
I betcha I can make a rhyme of the player who's to blame
Even though I watched the game, I sound like I wasn't there
Soon the media will appear
And start to lay the blame and it sounds the same, they make up
stuff and speculate and single out some names
Instead of speculating, why they lost that game
just blame it on the goalie
Here in Vancouver we do it all the time
but if you blame Kirk McLean than you ain't no friend o'mine

If you just took a minute, to really watch the game
you'd see the whole team's playin' lame
Shots, Shots, but none are going in
Defensive coverage, what is that again?
We take so many penalties I don't know what to do
and our power play is an advantage for who?

Okay?  Now say team...
Do you know what the word means?
When they play good we win, when they don't we don't
We should remember this instead of rushing to blame
one single person when the whole team's playing lame
our boys almost won it all
yet some don't seem to care, one thing you must remember
if the Canucks get rid of Lu, they ain't going anywhere

Let's get behind the boys
criticize when it's due
but every single problem
can't be solved by blaming Lu...
The Blame Game...

Okay, that was fun, wasn't it?  In all seriousness, we know (and most importantly) he knows he must play better.  But this team has not turned in a 60 minute effort to date.  Their special teams have been sub-standard, and as it's been mentioned by many on this site, the Canucks need to simplify things right now and just get into the groove.  The last thing they should have to be doing, is have the media and fans acting like a verbal lynch mob for one person, when the whole team needs to step it up, to a man.  Good goalies don't grow on trees, and we have one of the best of all time here in Vancouver.  His stats back that up.  Whether you want to believe it or not, he is an elite, world-class goalie.  He is also the one who is going to help us get back for another shot at hoisting that Cup.  I'll put my money on a goalie who's been there, as opposed to, oh... let's say a goalie who plays great in the regular season, but has lost his last 3 playoff series.

And of course, things aren't going to be easy tonight, as the Canucks prepare to take on not just a team that has a great goalie and a stingy defence, but one with a chip on it's shoulder after we knocked them out of the playoffs back in May.  It's the first meeting between the Canucks and one of the 3 teams they vanquished on their road to the finals, and both teams are sputtering a bit, though as is to be expected, one team is under a much larger microscope.  The Predators find themselves in a predicament as far as the future is concerned, with 3 big ticket players all in contract years in Pekka Rinne, Shea Weber and Ryan Suter.  They will not have the money to sign all 3, and will lose one for sure, but the possibility exists they could lose them all.  Personally I don't see that happening, but stranger things and all that...

Marco Sturm, one of the few skaters this season to catch the wrath of the fans draws back in the lineup tonight as Mikael Samuelsson will sit due to being not as recovered from surgery as he led us to believe.  This will mean a shuffling to the spots on the power play, which after the game with the Rangers can only be a good thing.  And that means Sami Salo and his pants-wetting slapshot on the point tonight.  Yes, I think that will do.

So, here's to a solid, 60 minute effort from the Canucks tonight.  And to writing about how no one complained about Luongo after the game.  I always wanted to try my hand at fiction...

BAND OF THE DAY- SKELETONWITCH

Straight outta Athens... Ohio, death-tinged thrashers Skeletonwitch are back with a new kickass album entitled 'Forever Abomination'.  Here's a wicked track dedicated to all the haters, non-believers and poseur Canucks fans out there...