NHL Realignment: What Could It Mean For Us?

Share All sharing options for: NHL Realignment: What Could It Mean For Us?

With the Thrashers being moved out of Atlanta and up to Winnipeg to become the Jets, it is quite obvious that realignment of the conferences in this league is imminent for next summer. Winnipeg will obviously be moving out of the Southeast division and into the Western Conference, while Detroit and Columbus would both like to move East.

Questions involving our precious Canucks have been raised recently in the threads on this blog and others, wondering what should be done about our team. Should Vancouver stay in the Northwest division and continue beating up Alberta, or should we move to the Pacific and take on California? Also, what would happen if the NHL switched to a system with 4 divisions of 7-8 teams each? In this post, I will consider 4 different scenarios, involving the 4 possible combinations of league-wide set-ups of divisions and the division in which Vancouver would play.

For reference, I found a very handy map below at Nashville blog Section 303, which did a post on this back in May. All I had to do was add on Winnipeg. 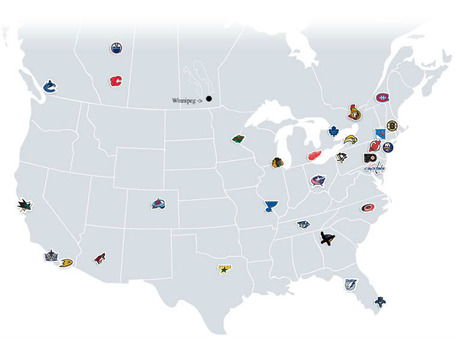 This was definitely the simplest rearrangement, with the least amount of change involved. It quite simply involved a merry-go-round for teams: Jets to NW, Avalanche to Pac, Stars to Cen, Wings to Atl, and Flyers to SE. The only division unaffected by this is the Northeast, which keeps their Canadian teams with Boston and Buffalo. Sure, the Penguins may lose their rivalry with the Flyers, but at least they'll get to see the Wings more often.

For this scenario, I found that Minnesota and Dallas were quite the wildcards. Geographically, Minnesota is stuck dead in the middle between the NW and Cen divisions, and could go to either one. Meanwhile, Dallas was out in the boonies, way far away from either possibility. As for the East, to make it a little more fun, I experimented with breaking up the cluster of Canadian teams (gasp!) and seeing what would happen. I doubt the NHL would actually break up the Tor-Ott-Mon cluster, since the rivalries between those clubs are very important up here in Canada.

In this arrangement, Columbus was the trouble-maker. Being too far away from both Western divisions, this is the only alignment where I could find a place for them out East. Also, because of this, I ended up with both 8-team divisions being out East, and both 7-team divisions out West. As for the NW, adding both the Jets and the Blackhawks to what we currently have could turn out incredibly brutally. Feel free to blast this alignment possibility in the comments, it's the worst one I came up with.

I like this setup. We can be in the same division as both the Alberta teams AND the California teams AT THE SAME TIME!!! And it's still convenient for timezones too!!! In general, this setup makes the most sense to me, should the NHL go to the 4-division setup. However, I do have to question whether it's a good or bad thing that the Southeast division is so stacked....

Well, these are the possibilities I came up with for realignment. Think you guys can do better?