This Week In Alarming Trends

Share All sharing options for: This Week In Alarming Trends 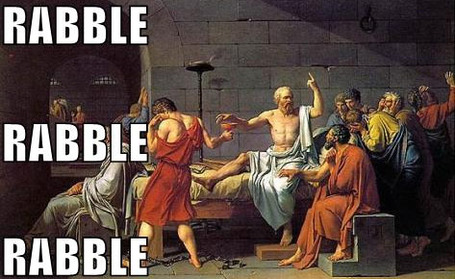 If you did nothing else but judge Vancouver's first week of 2011-2012 hockey by radio sound waves and 140 character messages, you'd be convinced they have the #1 pick locked up for June. Never mind that this roster (a) didn't play as a whole until opening night, (b) is missing 1/3 of its top six forwards, (c) has new defensive pairings still trying to pronounce each other's first name and (d) have three loses to Cup-capable teams. Just ignore all of that. Oh and blame Luongo. That bum.

This isn't to suggest there isn't some cause for alarm. As it stands now they are the middle of the pack in goals per game (16th - 2.50), the bottom third in goals against per game (22nd - 3.00), their PP is nothing special (14th - 16.7%), the PK has been poor (23rd - 80%) and they're the second worst team at coughing up goals in the first (6 in total, only trailing Tampa Bay and Ottawa). To a man most of the public ire has been directed at the vets, namely Mikael Samuelsson (though the crowd has quieted on him since he's at least scored and showed some promise on the man advantage) and Marco Sturm who saw his TOI hover around 15:30 the first two games only to be sliced down to barely 10:00 the past two outings.

Let's keep things in perspective shall we? Kesler is slated to return by next week and even if he's rusty, the mere presence of the KesLORD changes the offensive make-up at ES and the PP. Either Hodgson will float back to the 3LC or shift to Kesler's side (please make this happen); a slow Kesler still beats a rookie carrying around - in Botch's words - "two duffel bags as wingers." This isn't to suggest Kesler solves everything on his own, but it's a cascading effect that relieves pressure off the first line and gives the opposition another headache to deal with.

Secondly the defense will gel soon: it wasn't long ago people were raving about Bieksa/Hamhuis. Bieksa has been caught wandering out of position, but I credit that (and maybe even Edler's frequently exploding sticks) to the Ehrhoff fallout: the D needs to jump in the rush and fire away when they have the lanes but they're out of sync, a problem that is exasperated when the opposition breaks the rush and an odd-man rush suddenly appears. But, hey, how about that Ballard guy? Lastly if you're seriously complaining about the goalies then there are no words that can pull you back to reality and I suggest a sports allegiance flip to something that requires less thinking. Maybe badminton.

Keep in mind Vancouver started the 2010-11 campaign by going 1-3 before exploding through the fall and having the NW wrapped up by January. Plenty of time to right the wrongs.

Perspective. It's a hell of a drug.