Most of you fine-looking humans know we have an ongoing partnership for game tickets with TiqIQ; just click that nifty button called tickets up in the navigation and you can sift and sort through various pricing trends for GM Place Rogers Arena.

But as you also well know, Vancouver tickets typically don't come cheap unless you are throwing body organs or first-borns into the mix. That's why we're happy to announce a new contest that skips that whole capitalist headache.

Here's the rules: we want you to predict which Canuck player will accrue the most penalty minutes between today (Oct 13) and November 30th. That's a span of 21 games, including two against Chicago, Minnesota and St. Louis and road games against the Sharks, Ducks and Flames. At the very least the odds are decent someone in there will take a hooking call or Burrows gets the Auger treatment once or twice.

If you prefer your contest instructions in a handy visual form, you're in luck. 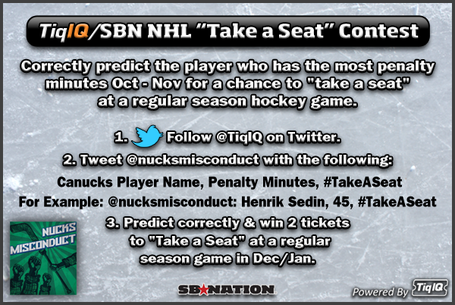 1. You can enter as many times as you'd like, but the final cut off is October 31st. No whining when November rolls around and you missed the window.

2. The total PIM count includes all games up until the end of November. Keep the current totals in mind when you enter and, better yet, play around on Hockey Reference and check out each player's past splits to see how penalized they have been during October/November in the past.

3. The winning entry (or entries) has to be the exact PIM total. No Price is Right rules. It is a contest after all.

If you have any questions, let us know in the comments.

My advice? Don't pick Henrik Sedin as the winner though, after last night, who knows?