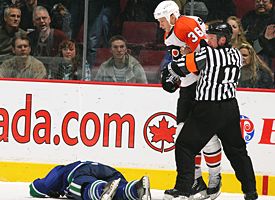 There's a lot being made as we roll into this new season about the Canucks being the 'Most Hated Team in the NHL'.  We told you that this would happen, so it's hardly a shock to this corner of the Smylosphere.  Hell, TSN's Quizmaster is even using it as a poll and discussion point for their broadcast tonight.  So prepare for more piling on kids, because the cheapshots are gonna be as plentiful off the ice as on.  And let's face it, when people hate a team with the emphasis on skill and speed over a team like, oh I don't know... let's say the Flyers, it reeks of the media pandering to the lowest common denominator of their audience.  It sounds like I care, and for the most part, I don't.  I am fully embracing the hate this season.  I just find myself scratching my head over the justifications for it, because the reasons most give for hating the Canucks are so often hypocritical when the light of other teams are shone upon (quite often their own favorites no doubt) that it just becomes silly and a tad embarrassing.  But hey, knock yourselves out.  That hate is gonna fuel us to another cup run, bitches...

There's a lot of excitement in Philly this season, and it's all because of an overhaul.  Bringing in a legitimate #1 goaltender and some mullet-sportin' Czech has many thinking that these moves, along with getting rid of Jeff Carter and former captain Mike Richards are going to make the Flyers a serious Cup threat.  The Flyers still have a great team, with a lot of firepower and good defence, but there's just as many questions as before.  Yes, Bryzgalov is a good goalie and a definite improvement on the revolving door circus that was going on there the last couple years, but he's got nothing to show for playoff experience.  As far as Jaromir Jagr, he may have looked good in preseason, but he's showing his age early on.  I do love the heel turn that he and another former Pittsburgh Penguin Maxime Talbot pulled by signing with the Flyers.  That would be like Iginla signing with the Canucks.  Hate is a good thing in rivalries and it will be a blast to watch those two teams this season.

Speaking of hate, Canucks fans and the media certainly got vocal about the perceived lack of response Monday when Columbus' Brad Methot ran Henrik Sedin from behind.  Let's face it folks, the Canucks did everything within the rules to try and make them accountable.  Turns out Methot is just a cowardly douchebag with no issues hitting a superstar between the numbers, but has issues when it comes to backing up his gutless play.  He refused to dance with Kevin Bieksa and Aaron Volpatti.  They challenged, he refused.  Dead issue.  The Canucks aren't lacking in toughness, we just have players with enough intelligence in their heads to not run out and jump a guy like Jean-Francois Jacques of the Ducks did to try and get at Mike Duco after a clean hit.  The Canucks focused on winning the game, did what they could without hurting their ability to come back and went on to win.  If you have a problem with that, maybe you're looking to get something out of hockey that has little to do with wins and losses, which are the reason the games are played, right?

So there's still some saying that the Canucks failed to respond and that teams will see this as a sign of weakness and try and do the same.  Considering the Canucks power play ability over the last couple seasons, you'd think teams might want to be wary of such behaviour.  Yes the Flyers have their skill guys, but they're still the Chris Pronger led Flyers.  And while Ryan Kesler's ankle is happy he's not back in the lineup yet, the Canucks will need to be wary of Philly's douchebag tendencies and make them pay when the inevitable happens.

Andrew Alberts slots in tonight in place of Chris Tanev, likely a move to ensure there's some size available should things get stupid out there.  Alberts has been known to chuck them and hits like a mack truck, so it might not be such a bad idea to have him in the lineup against a physical team like the Flyers.  Roberto Luongo will be your starting goaltender, and I look forward to the twittergasm of comments tearing apart everything he does, right or wrong.  Luongo bashers were once such an irritant, now they're a go to for in-game entertainment.

Jeremy Roenick turned some heads on NHL Network last night, when he went off on a Don Cherry-esque rant about how he was sick and tired of hearing Sidney Crosby updates.  Makes you think he and Mike Milbury are auditioning for that time when CBC finally has enough of Grapes and sends him out to pasture... Daniel Alfredsson had the trick shot winner as the Ottawa Senators notched their first win of the season over the Minnesota Wild.  Didn't see the game myself but I bet it was a non-stop, edge of your seat thrill ride that would make Micheal Bay wet his pants... It will be interesting to see what happens with Evgeni Malkin now that his reconstructed knee has gone all wonky on him.  He will miss the Penguins' home opener tonight, casting a touch of doubt on what was supposed to be a huge comeback season for him.

BAND OF THE DAY- TROUBLE

Legendary doom-metallers TROUBLE will be releasing a new album in February, so I thought I would dig out this classic from their self-titled album from 1990.  Saw these guys open for Pantera at the Commodore back in 1992, amazing live band.