"THROW YOUR DAMN HAT!": A Fan Code of Conduct for Hat-Trick Celebrations

Share All sharing options for: "THROW YOUR DAMN HAT!": A Fan Code of Conduct for Hat-Trick Celebrations 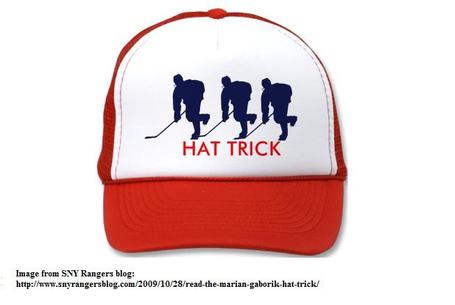 A hat trick, let alone a hat trick on home ice, is a fairly rare occurrence. It is traditional, when a player gets a trick, for fans to throw their hats onto the ice. It is one of the coolest traditions in sport, as it is simultaneously a fantastic tribute to a star performance and a surreal visual spectacle as hundreds of people from all areas of the building willingly litter the ice with their hats. I can't think of another North American sport in which such fan interactivity, which extends to throwing objects on the playing surface itself, is allowed (let alone encouraged) during a celebration. Given the rarity with which it occurs, a hat trick is an occasion during which most fans should feel obligated to throw their hat.

Unfortunately this is an area in which Canucks fans do not excel. After the jump, a quick overview of fan reaction to Ryan Kesler's hat trick last night, a mini-rant about fan reaction to hat-tricks, and a proposed Fan Code of Conduct following a hat-trick. 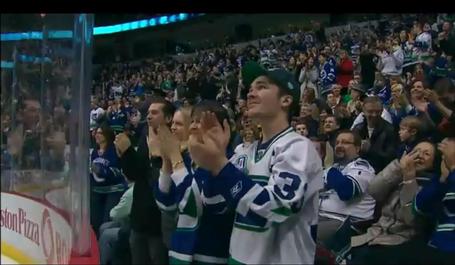 Unfortunately the fan did not throw his hat, but rather clapped and looked around seemingly in stunned amazement. Granted he looks fairly young, and that hat looks quite expensive. But he's also rocking a $300 Henrik Sedin jersey and sitting in front row seats, so I'd guess there's a good chance that his next allowance will probably cover the cost of a new hat. I guess he also has netting in front of him, but still no excuse: throw your hat sideways and let someone else toss it, or run over a few sections and throw it yourself. I don't care, just get that damn headgear on the ice pronto.

John Garrett then proceeded to inform viewers that "the hats come raining down!" Fortunately Garrett is not a meteorologist, because this "rain" was more of a light drizzle: 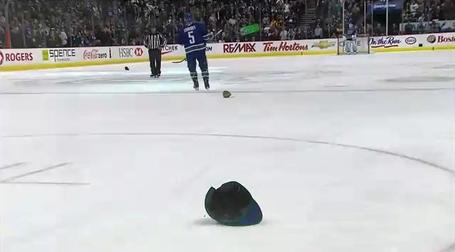 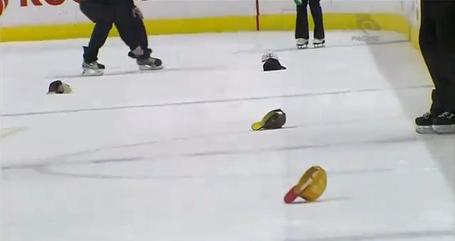 A pretty weak performance all around by the GM Place Rogers Arena faithful. I'm sure I could research the history of the hat-throwing tradition, but I'm going to speculate/pontificate instead: I believe that a hat trick is an exceptional feat, and that throwing your hat is a form of tribute. It's saying "Holy *%#& [player's name] that was amazing, you put in an exceptional effort to get three goals in one game, you gave the fans incredible extra value through your performance, and this hat is a small symbol of my appreciation for your awesomeness and entertainment.

Granted this ideal made more sense when players were poorly paid workers like most of the fans in the arena, but I still think there is room in hockey culture-despite its posters, YouTube tributes, trading cards, books, fan pages, etc.-for some old-fashioned adulation in the form of a hat throw. It's the same as cheering for a player after the three stars, something that is still meaningful for many fans at the arena (witness yesterday's tempest in a teacup). But if fans have the right to complain about Luongo not saluting the fans, can Kesler go to the media and whine about the lack of hats being thrown after his third goal? Obviously no, as he makes $5 million a year and would seem like the hell-spawn of Dan Ellis if he ever made such a statement. But the point is that these old traditions, and these increasingly rare opportunities for fans to demonstrate in-person admiration for a player, do matter.

Now, I understand that not every single fan can or should throw their hat. Some kid who got a new Canucks hat for Christmas, whose family scrimped and saved to get her a game ticket, who will maybe never get to another game in her life - she can hang on to her hat. So I've decided to draft a proposed Fan Code of Conduct for when one's team scores a hat trick.

1. All fans shall throw their hat, unless one or more of the following applies:

a. You are poor (NB: if you regularly buy tickets to games you do not fall into this category, it applies to people for whom attending a game is an exceptional occurrence because of financial reasons);

c. You are physically unable to throw your hat;

d. You have an exceptional emotional attachment to a particular hat (in this instance it is advised to leave the hat at home, unless it is a lucky charm for the Canucks in which instance you must explain this to anyone who will listen as they glower at you for not throwing your hat);

e. The hat cost more than $40 (see brackets after Clause 1d; otherwise, consider the cost of the hat to be the cost of added value provided by the hat trick)

f. You are an on-duty worker requiring a hat as part of your uniform (this includes concession workers, police officers, etc.)

2. If you are seated in the upper bowl, and have no hope of your hat landing on the ice, you shall still throw it as far toward the ice as you are able.

You should expect that a fellow fan will pick it up and continue to toss it toward the ice. Really, who is going to keep a used hat that falls from the sky and hits them? You can be pretty certain your hat will make it on the ice.

1. Throw your hat only in the following circumstances:

a. You are close enough to the ice that it has a good chance of making it over the glass; otherwise you're just opening yourself up for ridicule from rival fans and wasting a hat, as the other team's fans sure aren't going to throw it for you;

b. You are surrounded by rival fans and the act of throwing the hat, regardless of its likelihood of reaching the ice, is an important statement of fandom in and of itself. In this case you should draw as much attention to yourself, your team, and the awesomeness of the hat-trick scorer (e.g. "SEDIN!!! HELL YEAAAAAAH!!!) before launching the hat in the general direction of the ice (NB: this is most effective when you are ridiculously far from the ice, e.g. the upper bowl, and thus are clearly aware that your hat will not reach the ice)

1. Always throw your hat, regardless of the circumstances, if it was a free promotional giveaway on your way into the arena.

It's probably a cheaply made hat anyway, and you just unexpectedly got it for free. No excuses, barring exceptional circumstances (very young child, physical impairment, etc.), on this one. Home, road, doesn't matter - whip that thing toward the ice!

So, NMers, what do you think about hat-trick etiquette? Anything you would like to add to/retract from the Code of Conduct? Chime in below if you do. And here's hoping we will have many more opportunities to enact this Code during this season!