The Case For - But Mostly Against - Sami Salo

Share All sharing options for: The Case For - But Mostly Against - Sami Salo 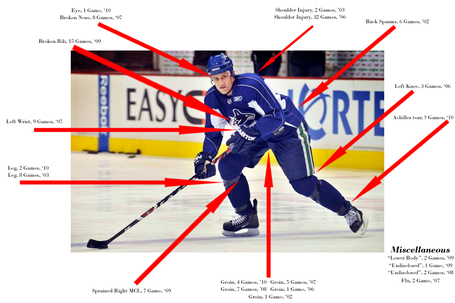 Picture this: it's the second round of the playoffs (again) with Vancouver and Chicago (again). Let's guess it's a close series and the Canucks push a seventh game. However, game six, Edler takes a high stick that cracks his orbital bone and he's beyond not available for the deciding game. Don't look to Bieksa or Ehrhoff to pitch in because one of them is gone, thanks to the cap and the supposed need to retain the services of Sami Salo.

Maybe Ballard gets an uptick of an additional 7-10 more TOI and can step in admirably. Maybe Hamhuis and whoever his partner is can eat even more minutes. Or perhaps Salo himself gets the task of shutting Toews and Kane down, which - let's be honest - didn't work so well the last two springs.

Your move Gillis. You have a Canucks team that hasn't played this well ever in its 40 years and can legitimately target a President's Cup if things proceed as they are (congrats by the way). Do you potentially tinker with that chemistry and affect your overall asset management to squeeze in one of the most oft-injured players in the league (and your oldest roster player) in an attempt to...what?

During the first intermission last night this very topic of conversation was discussed, which included the possibility of moving either Bieksa, Ehrhoff or Raymond in order to clear the decks for Salo's return. The conventional wisdom is that Salo could bolster the Canucks because he's a shutdown defenseman with offensive upside. There's no question that, in the past, Salo's size and frame make him a formidable blueliner. But we know his story by now and it's riddled with "if's".

Out of curiosity - and not that this approach isn't open to debate itself - here's a comparison of Salo's season last year against where our current defense ranks in some crucial defensive categories.

Salo ranks respectively with the top four this year; the Corsi QoC and GA/60 both jump out in particular. He's neck and neck with Hammer in playing up against the oppositions best, but Salo was lit up in goals against. Nevertheless you can see how Vigneault used him outside the top pairing and IF he remained healthy and could perform at a similar level, he'd be a good asset to have for the second/third pairings and on the power play. The ideal would be to bury him with Ballard and don't let him sniff anything close to 20 minutes a night.

But do you see any specific area where his inclusion is vital? And if you do, how comfortable are you with gambling one of the other healthy defensemen to accommodate Salo's cap hit?

As for the offense, a sunsetting player can't truly be relied on for consistent production anymore. Salo's best offensive season was in 2006-07 and he went steadily down across the board the next two seasons before a slight uptick last season. If he does return, at best he'll play in the mid to high 30 game range, contributing probably 10-15 points and perhaps 5-7 goals. Once again for reference, here is Salo's 68 games of production last season ranked with the current blueline:

It's almost the same reaction I had to the table above: he ranks well, but nothing spectacular either. I'd also wager Bieksa would pass Salo in the points per game pace if he wasn't handed first line duties vacated by Salo already.

GM's have to manage their assets astutely, and while no one's perfect, Gillis has done an admirable job in locking away the core while surrounding them with acquisitions that have panned out. The Canucks have no problem scoring and boost a top ten PP and PK. Scan the roster up and down, there aren't that many weaknesses Gillis needs to prepare against.

However it's certainly not a stretch to suggest Vancouver doesn't win the Cup this season, so as Salo enters free agency there's no certainty he'll return (the same can be said of Bieksa and Ehrhoff) nor would we want him to. Even if Vancouver wants to emulate Chicago and go for broke now, is Salo a better bet than keeping Bieksa, Ehrhoff or Raymond?

Sean touched on all this earlier and, after last night's TV piece, I keep returning to the same mindset with Salo: he brings some quality to an already strong group IF his TOI is shielded and IF he stays healthy and, even then, I'm not comfortable believing it. It may happen and then Gillis would look like a genius, particularly if he navigates the cap to keep the top four blueliners and Raymond along with Salo while only losing Rome or Alberts for instance.

But the short and long-term risks are simply too great, amplified by Salo's most recent comments last weekend. No one should ever debate Salo's commitment and testicular fortitude (zing!) over the course of his career; the guy is a warrior that likes of which none of us will truly understand. But just as with Mitchell before him, the Canucks have moved on with the direction of their defensive committee and it's working. The best outcome for all parties is Salo retires and the Canucks keep chugging along. Let this team succeed or fail with the roster management bought to the dance, not undermined halfway through to accommodate a player whose value to the team has become the very definition of questionable.