Share All sharing options for: Canucks 3 Flames 1: Don't Get Cocky

It was a sound defeat by the Canucks in a sense because they made it look more easy than the shot total suggested: 44-21 Flames. Roberto Luongo was solid again but was unimpressed after the game. He did not come out and skate the circle and give his stick away after being named the first star of the game. Why? Because he wanted the shutout. He joked post game: "I don't like shutouts, that's why. I like to let goals in in the last five seconds. Shutouts are overrated." Then he got a little more serious and said: "I'm a competitor and obviously I want to stop them all and I was a little disappointed that went in there at the end." (The Province). Tim Jackman, seemingly one of the only guys scoring for Calgary lately, scored with only 11 seconds left after not being covered  well enough by Dan Hamhuis.

Like Jason Botchford mentions in that article, it's great to see Luongo have that competitive fire. The same can apply to Daniel Sedin. He called the Jackman goal "unacceptable" and said post game: "We have to be careful now, I think we’re starting to slip. I don’t think we played a good enough game. We need to get better.". Alain Vigneault mentioned that he thought the Canucks were trying to find their legs in the 3rd period after being outshot 18-9. Call me crazy but it seemed like the team went into cruise mode after going up 3-0. Hell, they were outshot 32-14 in the final 2 frames. They didn't give up many great chances and kept the quality chances against to a minimal. Shot totals can be deceiving sometimes. Hey, maybe they were just pacing themselves. After all, they are playing 5 games in 7 nights. The best

part is that they have won the first 3 of those 5 games! They are on a 16-1-2 run and are now 10-1 against their pathetic Northwest Division foes.

These are good times aren't they? Hell yes, but don't get cocky. I sensed a little bit of cockiness in Kevin Bieksa post game when he said in front of the Rogers Arena fans: "Yeah we love beating Calgary on home ice don't we?" I know it's funny and fun, but I wouldn't be saying that stuff. As great as these times are they won't last forever. There will be some form of adversity as time goes by. I just like the majority of the team's focus right now. I hope they can remember these times and what it takes to win when the going gets tough down the road. 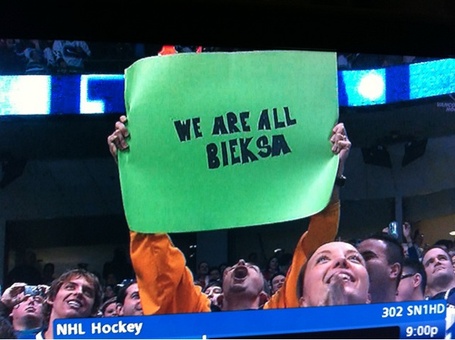 Speaking of Kevin Bieksa: wow, he continues his marvelous play. He scored a goal and added an assist plus played 21:55 tonight. He played 1:35 on the power play (the Flames only took 2 penalties) and 2:38 shorthanded (the Canucks took 3 minor penalties). He now has 2 goals and 4 assists in his last 6 games. I'm not sorry, but this is not a guy you flog if Salo returns. Oh yeah, and he is a +14. His resurgence in that category began around early-to-mid-December.

-I have been bagging on Christian Ehrhoff lately for his blunders but I think he has looked great all-round over the past few games. Less errors. In his last 5 games he has 5 assists and is a +5. 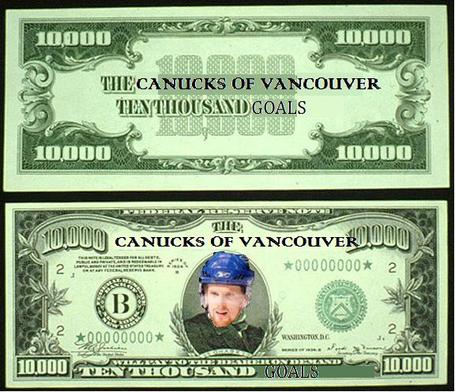 Mad props to Semi_Colon for quickly providing that image. Daniel Sedin scored the Canucks' 10,000th goal tonight (and WAACH 'Cast won our contest).  How fitting that it was Daniel, who will be the best Canuck scorer ever. But this 10,000 goal feat will be quickly forgotten. Nice stat, but let's move on.

-The planets are starting to align:

Luongo's 19 wins now tie him for 2nd in the NHL with Carey Price and Jonas Hiller. Only Jimmy Howard has more wins (20). Price and Hiller have played 6 and 7 more games respectively. Howard has played 30 games, same as Luongo.

-In his first 3 games back Mason Raymond has 1 goal and 2 assists.

-Olli Jokinen, Jarome Iginla, Robyn Regehr, Jay Bouwmeester and Alex Tanguay were all a -2 tonight. Atrocity thy name is Calgary.