I'll keep this short. Roberto Luongo looked excellent stopping 31 of 32 shots. Ryan Kesler had an off game by his standards. He ended up in the box 3 times. The Canucks gave the Avalanche 6 power play chances and killed every one of them..dead. Dan Hamhuis is listed as playing 4:52 shorthanded minutes! Canucks teams of recent and distant past may have collapsed after the Avalanche pulled within 1 goal, but not this group. It looks like the Canucks can win in all different ways. Tonight was a low-scoring tight game where they excelled defensively (as did the Avalanche).

-Mason Raymond comes back and looks like he had not missed time at all. He gets put on the 4th line and scores a goal, while Alexandre Bolduc scored his first NHL goal and added an assist and Tanner Glass had 2 assists. Bolduc only played 5:52. Raymond: 9:17.

-What the hell was going on here (h/t Wisp)? 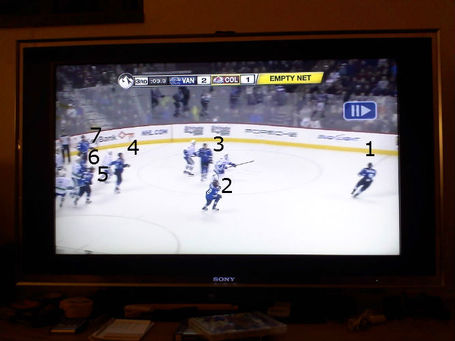 Luckily no harm no foul.

Seriously, have the Canucks EVER been on top of the NHL at this point of the season before? I don't recall it ever happening. Does this look swingin' or what: 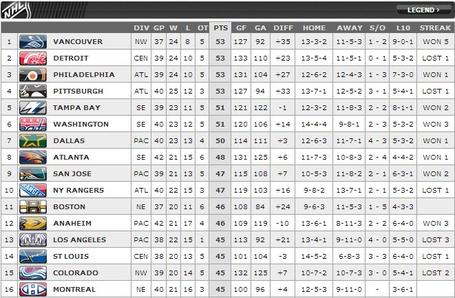