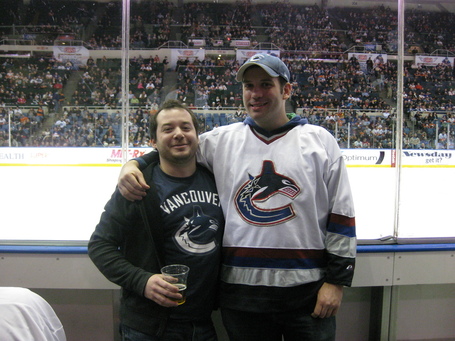 I had the pleasure of seeing my second and third Canucks games of the season last week, completing the 2010-11 New York State trifecta by seeing games in Long Island and New York (having already visited Buffalo this past November). This now puts my total at seven cities in which I have seen the Canucks play – still a long way to go before I hit every arena, but a very cool adventure thus far!

The game against the Islanders was a little different though, as I got to play baller for a day and sit in the very first row, on the freaking glass, right next to the Islanders bench. Oh man, was that a cool experience! And a pretty reasonably priced one, given the Islanders attendance woes—the ticket was $80 on StubHub, whereas a comparable ticket in Toronto probably would cost me at least $400 if not much more. Needless to say, given the very rare opportunity to watch the Canucks play up close and personal, I jumped all over it.

After the jump: handmade signs, rowdy Canucks fans, remnants of the Islanders’ past glory, a video of Tanner Glass’ fight and the Isles’ bench reaction to it, and lots of up-close action shots. Oh, and a mid-spinorama photo of Mason Raymond’s shootout goal.

My afternoon got off to a bit of an inauspicious start and resulted in a small personal injury before settling down into a fantastic evening. A downside of attending an Islanders game is actually getting to the Nassau Veterans Memorial Coliseum. My friend lives in Manhattan, so I had to jump the Long Island Rail Road from Penn Station. Unfortunately the LIRR does not stop anywhere near the arena, so I then had to catch a cab to the rink—well near the rink, as cabs are apparently not actually allowed to pull up to the arena entrance. Doesn’t make much sense does it? No wonder the Islanders struggle to draw fans, as it is not an easy arena to get to (okay, that’s not the only reason, but it couldn’t hurt to at least have a train station right by the arena).

The arena is kind of in the middle of nowhere, surrounded by a massive parking lot and a Marriott Hotel (all owned by Charles Wang, apparently) and flanked by a turnpike. I had arranged to meet up with Sean Leahy from Puck Daddy for a few beers before the game, as he was attending to write a piece on Ryan Kesler. Unfortunately I am a city boy, and am a bit ignorant when it comes to the ’burbs. I thought I could easily walk to the bar from the arena. ’Cause bars are always close to hockey arenas, right? Yeah, turns out not so much. My adventure started when I couldn’t find a way out of the massive parking lot, and ended up jumping a fence that was over 6 feet high. That led to a pretty nasty cut on my hand and my leg, as well as a nice rip on the inner thigh of my jeans. I then proceeded to wander a kilometre the wrong way, before realizing my mistake and walking back the other way for 2.5 km. I did eventually make it to the bar and had an enjoyable pregame drink with Sean, but felt like a giant idiot for being late and for not just asking the cab to drop me at the damn bar in the first place. This is why, along with the high likelihood of fans drinking and driving, that arenas should not be built in the suburbs! 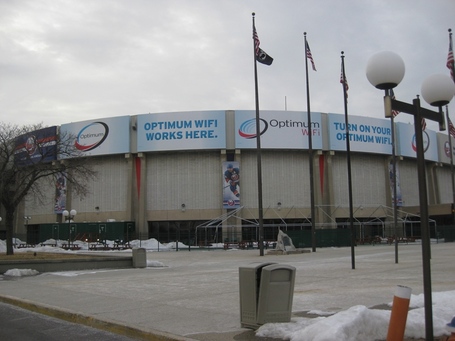 Fortunately I got a ride back to the Coliseum, where I met my friend at the hotel bar. The bar was clearly the place to go for pregame dinner/drinks, probably as it is the only thing in the vicinity other than McDonald’s and Chipotle. I saw a good number of Canucks fans, had a nice chat with a couple at the net table who holds Isles season’s tickets, and did my all important sign preparation work: 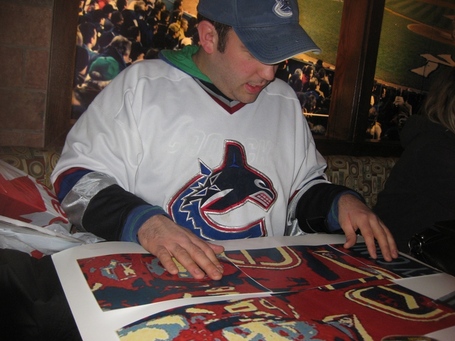 We wandered out in time to catch faceoff, newly completed signs in tow: 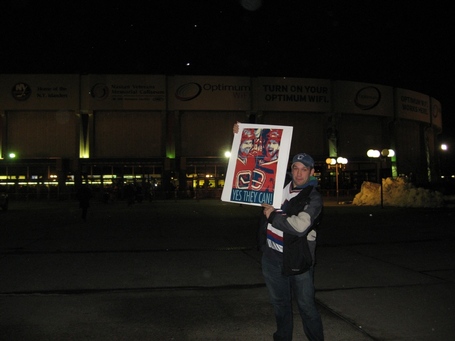 We arrived just as the Islanders took the ice: 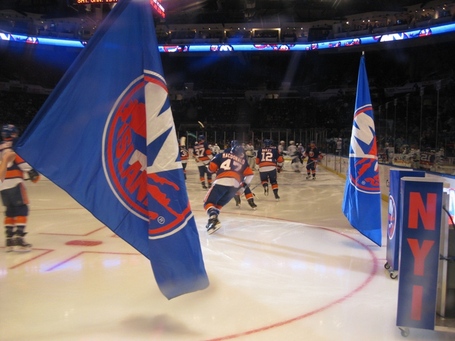 This was the view from my seat. Cool or what?!? 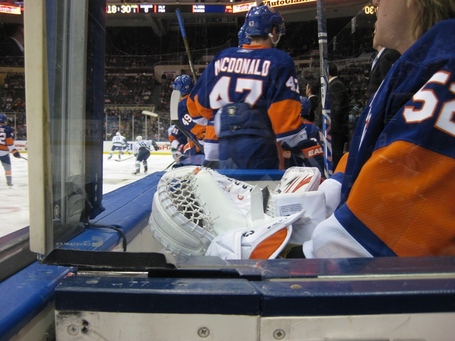 I did not know that the NHL has its logo embossed on every pane of glass in the arena. Now I know. Thank you StubHub! Does this mean they had to get all new glass made after the lockout? Come to think of it, how often do they put in new glass? Things I’ve never pondered from my usual spot in the nosebleeds. 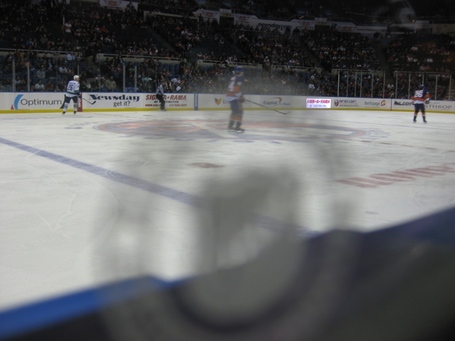 The interior of the Nassau Coliseum is fantastic. It reminds me a lot of the ol’ Pacific Coliseum. In fact, they are quite similar: Pacific opened in 1968, Nassau in 1972; Pacific holds 16,281, Nassau holds 16,250. It feels very intimate inside as a result of the small size and fairly steep incline. As great as my seats were, I would love to watch a game from the nosebleeds, as you’d have a great view from anywhere in the building (and yes, the seats filled up more than this). The arena also combines a rockin’ retro scoreboard with a modern video board. Impressive! 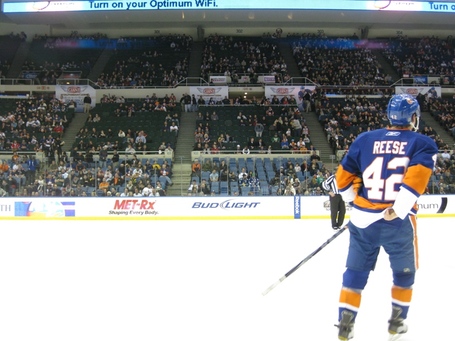 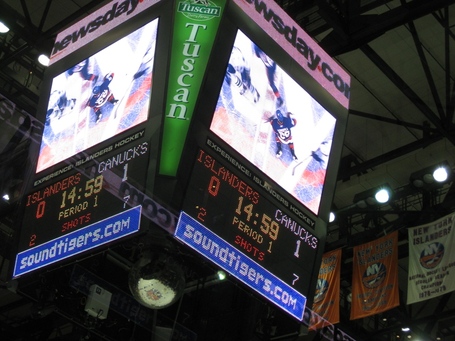 I took a video of the Tanner Glass fight, but also tried to capture some of the emotion on the Islanders bench. Unfortunately I’m not quite HBO, and thus both missed the KO punch and most of the yelling and stick-banging by Islanders players. Ah well.

I’ve never sat so close to the ice, and naturally I decided I would use clever, witty, elegantly handwritten, and all around awesome (in other words, if you don’t catch my sarcasm, highly amateur) signage to simultaneously a) show my support for the Canucks and say hello to you fine folks and b) try to get on TV. I succeeded in the latter quest. Hopefully I did in the first one as well: 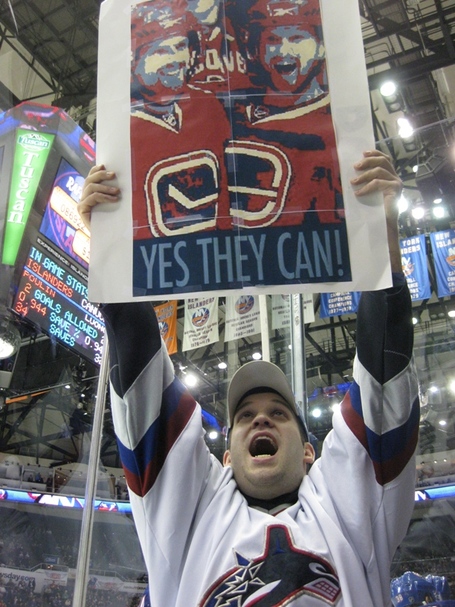 My friend chipped in with his own witticism to mark the return of our friend Stephane Auger to reffing Canucks games: 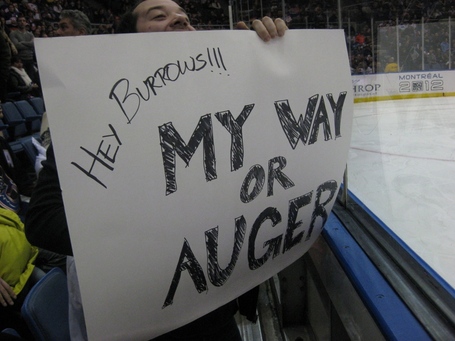 Okay, time for some in-game action shots! Holy cow it is amazing to see the game played this close-up. It is amazing what the players can do with the puck, and how seemingly simple little things are actually really hard. One thing that really struck me is how hard it is to keep the puck in at the blueline when it is fired up the boards. To then settle it down and make a quick pass is even more impressive. Dan Hamhuis particularly impressed me in this regard, as did Alex Edler. You also really notice the speed at which everything happens, and how many little adjustments they the players have to make for slightly misfired passes, bouncing pucks, and incoming body-checks. Players really have to be alert at all times, even on seemingly routine plays. Manny Malhotra also looked excellent in this regard, just making smart little plays and positioning himself well to do so. Okay, enough blabber – here are some of my favourite action shots that give you a sense of the view from these seats: 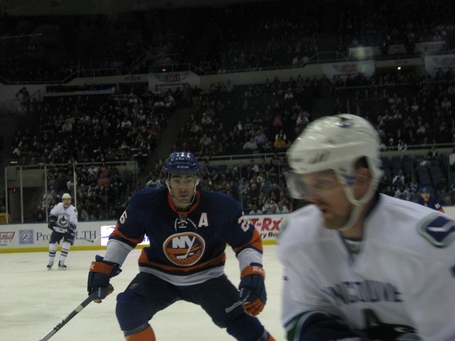 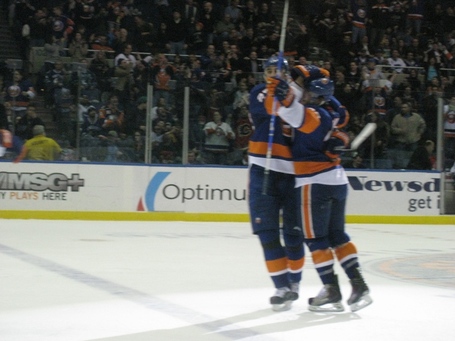 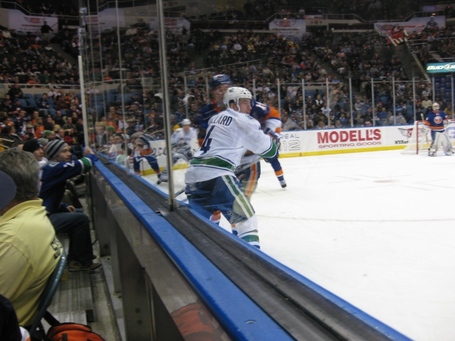 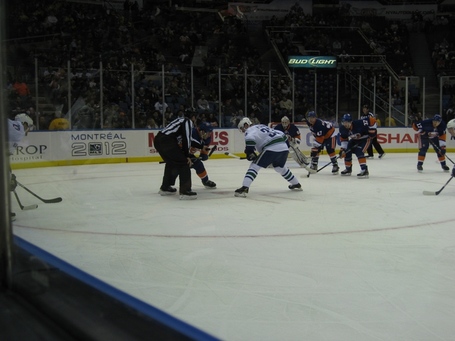 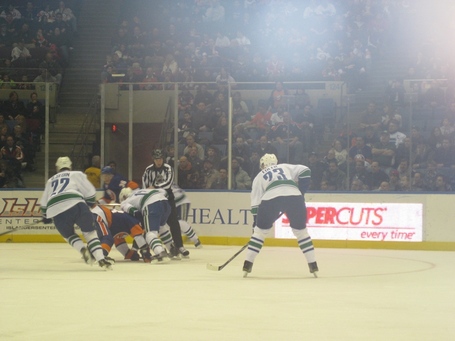 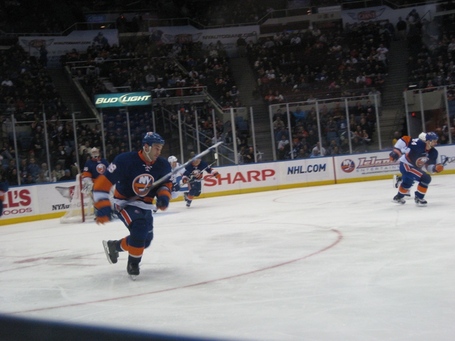 Man, the Isles used to be amazing. Kinda sad that a franchise with such a great history has not won a playoff round since 1993. Hopefully better days are in the cards for long-suffering Islanders fans (ignore that one of those Cups came vs. the Canucks): 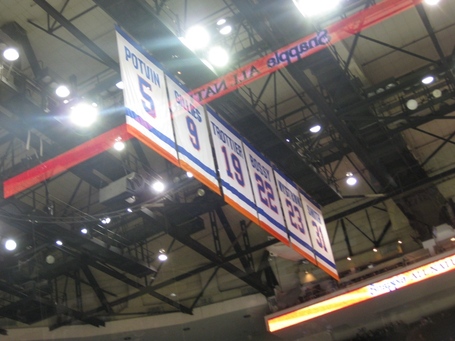 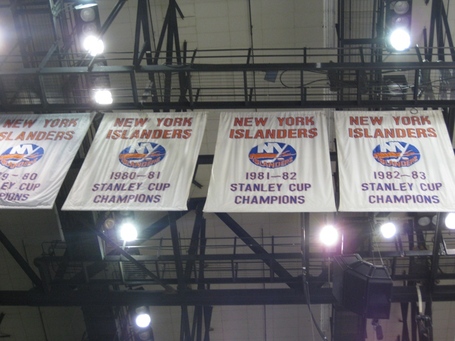 Speaking of the fans, I would be amiss if I did not discuss the issue of fan support and attendance on Long Island. I talked to a handful of Isles fans, and while not numerous they are passionate – there is clearly a solid core of devoted Islanders fans. One very cool thing was a rowdy group of hardcore fans in the nosebleeds who spent much of the game on their feet chanting and singing songs, like it was a European soccer match. I would absolutely love to sit amongst them for a game some time. I really hope this team finds a way to make it work in Long Island for many reasons. One, it is always sad to see a team with diehard fans, however few in number, leave town. Two, the Islanders have a great history and tradition and the team just wouldn’t feel right in another market. Three, the rivalry between the Isles and Rangers is pretty fantastic—I have seen them play at Madison Square Garden in the past, and it is a very, very fun atmosphere at the derby. There were actually a few fans in the building watching the Islanders and Canucks who started "Let’s Go Rangers" chants. Any rivalry in which fans show up simply to cheer against their bitter enemy is pretty special – or New Yorkers are just obnoxious, I’m not sure which. Hopefully everyone involved finds a way to keep the team on Long Island, and that the team starts to draw better as its young core grows and improves together. Here are some Isles fans cheering a goal: 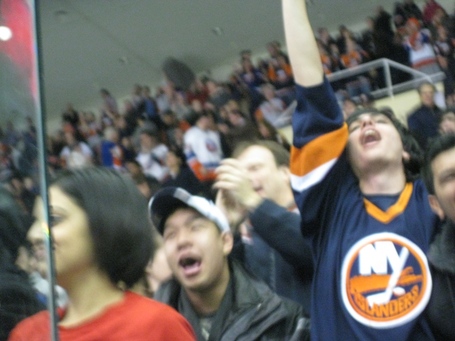 As I am getting used to at road games, there were also lots of loud, passionate Canucks fans at the game. Here is a selection of fan pics – anyone recognize themselves? 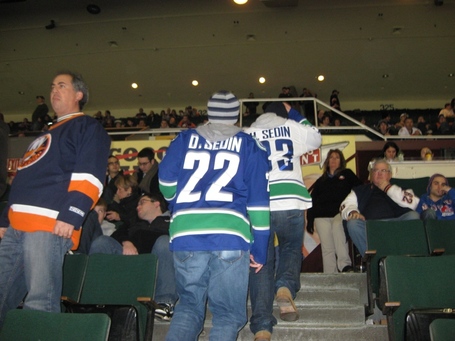 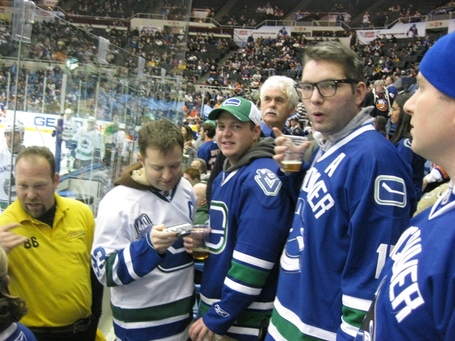 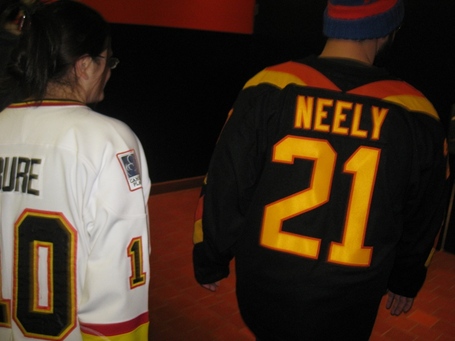 The shootout was interesting to watch from my vantage point. Excellent view of the Canucks goals, couldn’t really tell what was going on at the other end. What was cool, though, was seeing how into it the Isles bench was, as the first picture hopefully shows. The second pic is of Kesler, moments before winning the game. 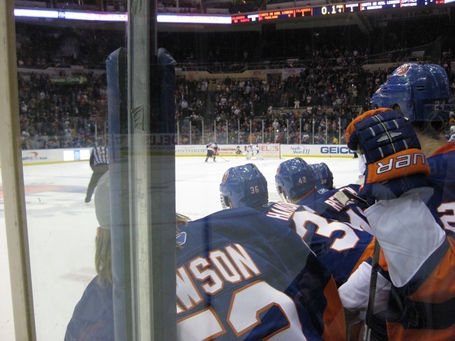 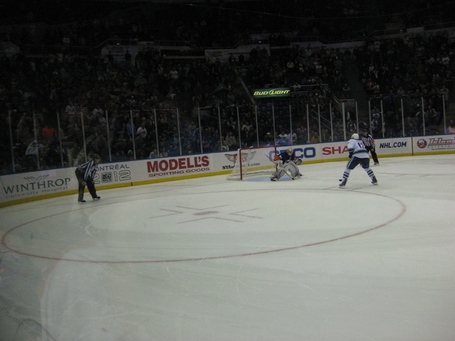 And my favourite picture from the entire evening. Think it speaks for itself! 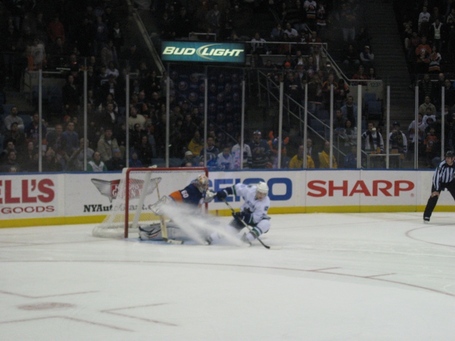 After the game, a bunch of Canucks fans gathered in the concourse and cheered and danced. It was pretty awesome. After snapping this quick picture, I of course went and joined in. 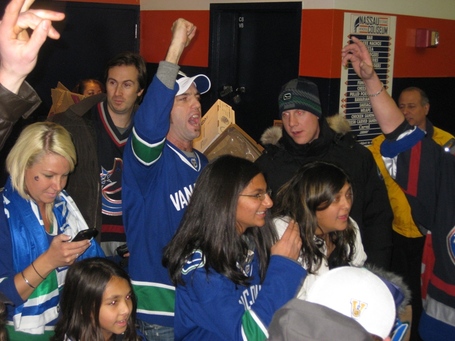 And with that, we headed out into a wicked snowstorm that began during the game and made the long trek back to Manhattan after a fantastic, unforgettable evening: 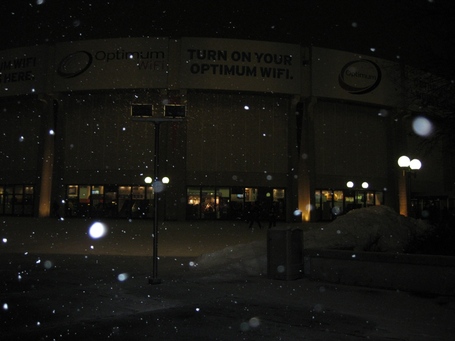 I don’t know if I’ll have an experience like this one again. I’m sure I have seen, and will see, better games in person. But this was a whole new perspective on the game that quite frankly I can’t afford in most NHL cities. Throw in a scrappy Islanders team that pushed the Canucks hard and the epic shootout win, and it was a really special night. In the next few days I will post a much less epic and much shorter recap of my experience at Madison Square Garden two days later.