What Could Go Wrong?: Canucks & Wild

Share All sharing options for: What Could Go Wrong?: Canucks & Wild 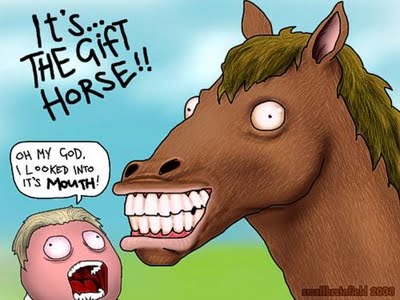 Enemy Con: Hey is that Hudler? Nope it's Rolston.

The good: Back on the winning side of life, Vancouver is catching a reeling Wild team, one that is starting to receive a far share of boo birds in their own barn. They've lost three straight and been outscored 13-2 in that stretch. The Wild's offense is tied with the Oilers for lowest goal totals in the conference (no joke, Clutterbuck is their leading scorer). They're missing timely offense from the injured Zidlicky and Latendresse. Both Wild netminders are injured too, so with Harding out for the year as well Vancouver could be aiming their blasts at fourth stringer Anton Khudobin. A win tonight and the Canucks will be almost 20 points up on the Wild in the NW.

The bad: Vancouver routinely struggles in this city who can't keep a football roof up. Schneider's flawless record has to be a card played by Vignuealt since Luongo seems to embarass himself in the Xcel Center too often. We'll see Pierre-Marc Bouchard for the first time in almost two years and he can make life hellish for more than just Alex Burrows. The Wild maintain plenty of players who can convert their opportunities like Havlat, Koivu, Miettenen, Madden and Brunette, all of whom factored in on that 6-2 loss in their last Minnesota meeting, the same night of Rypien's now infamous high-fiving incident with a fan (or something).

The ugly: That Vancouver may not actually beat these bottom-dwelling paint sniffers if they end up in a Rangers-like game where the neutral zone is gone and they don't have an answer to the shot-blocking, forechecking monsters on the other end of the ice. But that's just silly.

Assumption is the mother of all fuck-ups.

Full disclosure: I never saw that movie. Or the first one. My Steven Seagal knowledge is alarmingly mediocre.