If going from Kingston to DC to see a Canucks game seems crazy to you, you might be on to something.  Why I didn't think to go to the game in Ottawa, I have no clue - I must have been doing something that night.  Yeah, that has to be it.

Luckily for me I have a friend from DC (who happens to be a Caps fan) who was easily convinced to go on an 8 hour drive a week after he had just done it to come back from Christmas.  I also managed to scrounge up another Canuck loving friend for the adventure, because travelling in groups is always recommended when attending road games.  Unfortunately this one was under the legal age in the USA and he didn't think to bring some sort of fradulent ID, which will come up later. 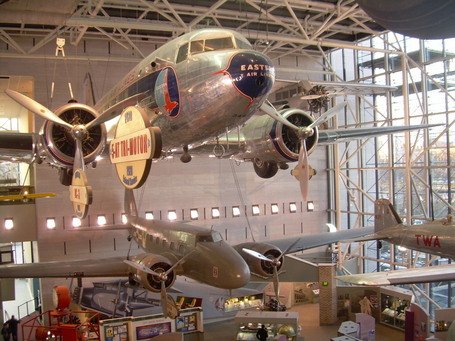 I won't bore you with the details of the DC tour - needless to say the monuments are amazing, the museums are fantastic (and free!) and I loved the architecture.

The Verizon Center is right downtown, in a nice location with easy access to subway and bus and bars, just like a good arena should be (cough Ottawa cough).  It's also really nice on the inside, but what else would you expect from a fairly new rink? 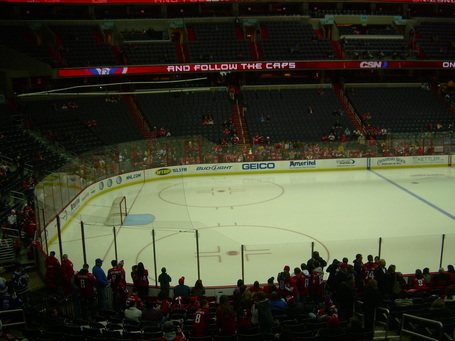 View from the box we were in 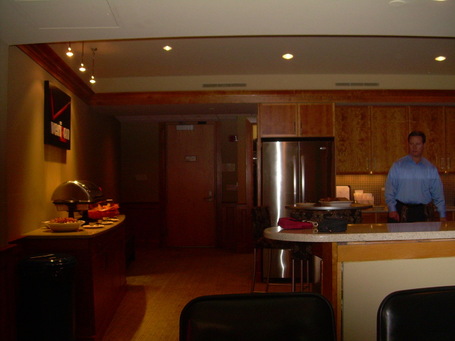 The box.  Yes, that is the Verizon box in the Verizon Center.  Yes, that guy may or may not be a President in Verizon.  Yes, we may have been mad ballin here.  My friend has connections

I may not be able to go back to regular seats after this.  Free food, free beer, en-suite bathroom (key). My new dream is to own a box.  Amazing.

So anyways, walking around the arena we came upon a guy who knows his Kesler roots: 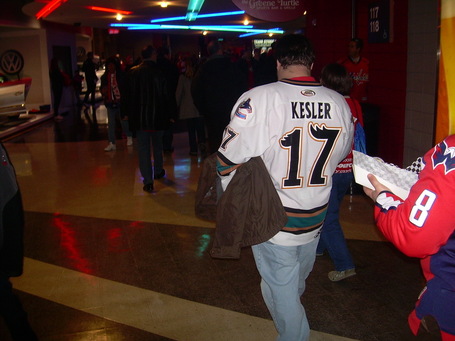 And now, a smattering of warmup shots:

Lu leads the boys out 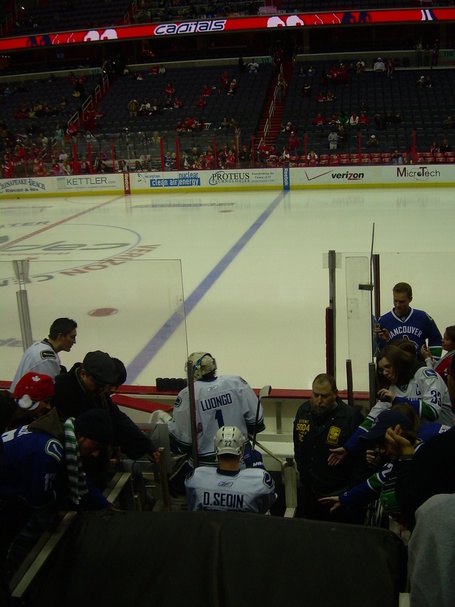 A gaggle of fellow 'nucks fans 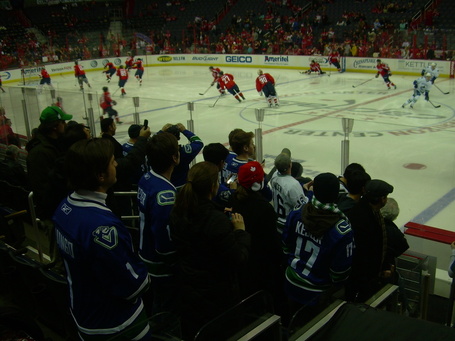 The Ginger Jesus observes his flock 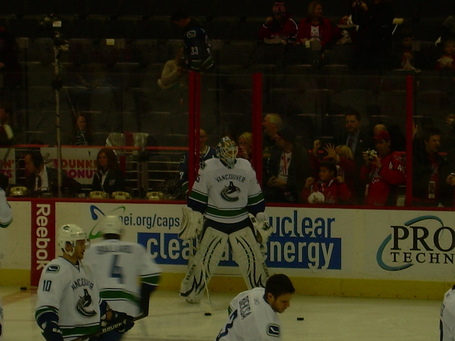 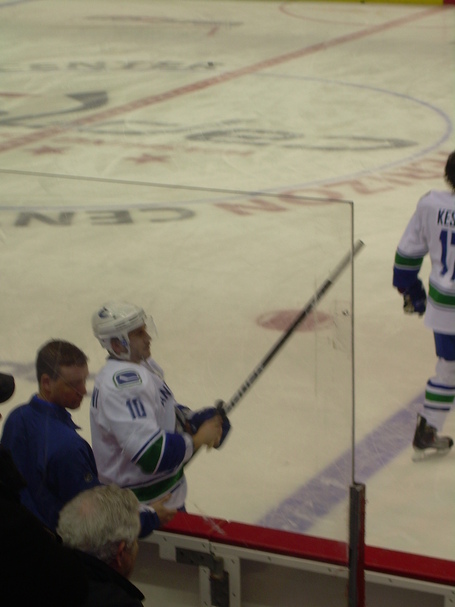 The Caps' entrance was pretty good - I like the kids lined up with the flags.  Apparently the son of one of people in the box with us (I think she was the wife of the Verizon dude, but not sure) was one of the little kids.  How awesome would that be, as a very young hockey player, to be able to go out and do that? 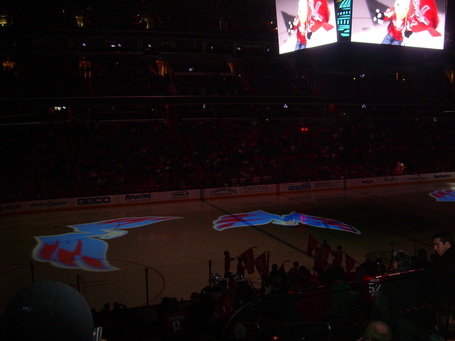 First period was hit and miss - building was a little flat to start off as the Canucks dominated possession, until Matt Fucking Hendricks scored on a breakaway (seriously, WTF) on the 2nd shot.  Then it got pretty loud.  One of the Caps fans in the box was high fiving everyone after the goal and tried to high five me before she realized I was not too pleased about the goal.  It's okay, we got our revenge.

In the second period during one of the TV time outs, the following came up asking people to text what they wanted to hear.  Since I know everyone loves to talk about the Arcade Fire, I had to take a picture.  Chuckles will be happy to learn that Caps fans do not approve of them either.  Or, they like Dragonforce a lot. 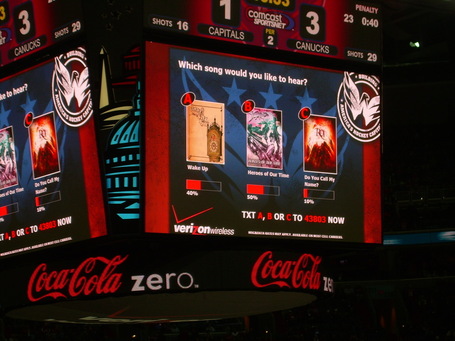 Third period started getting scary after the Caps got the second goal.  From where we were sitting I could actually see the gaping open net from Johansson's perspective before he put it away, and totally saw it coming.  Still sucked though.  Also, they played about 10 different motivational speeches from movies in the last 5 minutes.  Ending with the always classic "inches".  Didn't help.  Hey, where's everyone going?  The game's still on! 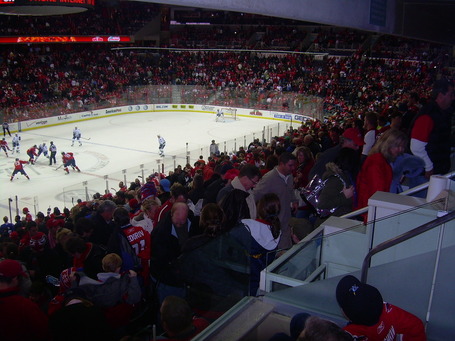 All in all, great game, great atmosphere, the Caps fans were very gracious and accommodating - I had multiple people come up to us and give us a handshake, back pat and a "great game".  Although most of them seemed pretty hammed.

were sitting beside two lovely DC area girls who kept razzing me throughout the game for being from Canada and thinking that I was too comfortable with the 2 goal lead I kept referring them too.  Needless to say they were saddened at the end of the game.  I was not.  Although my DC friend and I became saddened after they asked us if we were going out after and we said "of course" before realizing the other guy we brought couldn't because he was under age (dammit USA, lower your drinking age to match ours!).  So instead of being jerks and ditching him we just went home.

It's not very often I get to see the Canucks play live, I think the last time was when I was still in high school, so it was a nice treat to see them win.  Eastern area NM roadtrip if we play Detroit in the playoffs, anyone?

Also, apparently one of the rowdy guys in the box was a Senator from Pennsylvania.  Yep.