Share All sharing options for: Sedin Jerseys Still Not A Hot Item

I was talking Canucks with an employee at Jersey City in Kamloops a couple weeks back. We talked Luongo, the teams' chances, and sales of Sedin (especially Henrik) jerseys. I wasn't inquiring about the Hank jerseys because I wanted to buy one, but rather that there were so many of them and so few of other names on their respective racks. "Are you selling many Sedin jerseys?" I asked. "Not many" replied the employee. "Even after he won the Hart and Art Ross Trophy?" I asked in disbelief. "Nope not really," he replied. "Actually we sell more Rypien jerseys than Sedin jerseys." OK, that one surprised me. But maybe it shouldn't have. Personally, I don't know anyone that owns a Sedin jersey. (Except this guy). Do you? When I talk with people about purchasing a Canucks jersey the first names that come up are Luongo (well not Lou as much lately), Kesler, Burrows, Raymond, or retro Smyl or Linden...nobody says "a Sedin jersey." This isn't the first time an employee at a sports store has told me this.

Why do the Sedins get no love with jersey sales?

I'm going to break this down into several categories and then ask your opinion. 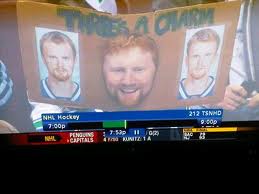 1. Because there's 2 of them. Have you ever wondered to yourself which Sedin you like better? Last season may sway people towards Henrik, but Daniel was injured early on and Hank had to persevere, and did so in wonderful fashion. Plus Dank was on pace to tear up the scoring chart as well. According to Dank's points per game, had he played 82 games last season he would have scored 110 points. Hank's total points? 112. But every other year their stats are nearly a draw. So you walk up to the D Sedin and H Sedin racks in the store and generally cannot pick one over the other. That has been one of my dilemmas in the past.

2. They are not flashy players with flashy personalities. They make brilliant plays, with many of the goals scored resembling eachother on the cycle and then on occasion pull off a play that blows everyone's mind. (See the goal of the year last season.) But there's no double pumps, pounding the glass or other special celebration involved with these guys. They take it all in stride in a calm demeanor. The same can be said about their post game interviews. The Sedins are fine with minimum spotlight and prove that on the ice and away from the rink. And speaking of that..

3. They are not overly physical players. Maybe if they dropped the gloves on occasion or absolutely wreck somebody with a devastating hit there would be more respect (no, this doesn't count). But the Twins are guys that take abuse and keep on ticking. That's just the way they are. I don't see that ever changing. The ding on this theory (and #2 theory) is that Markus Naslund was the same way and that bugger sold a lot of jerseys. However, Naslund wore the captaincy for many years and was a part of the infamous West Coast Express line.

People in general respond to aggressive players. They love warriors. The mainstream media loves a colorful personality for interviews and in turn the team can market these players' merchandise. The Sedins just do their job in serious fashion and go home to their families. They like the quiet life out of the spotlight. But you know they do want to be respected. 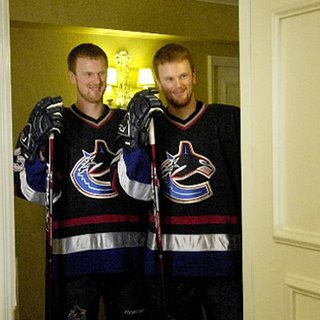 4. "Awkward" Twins. The close bond that they share with eachother is something that many people don't quite understand and quickly poke fun of but in reality it's a beautiful thing. Identical twins can form a bond that can be unmatched compared to those who are not twins at all. Dank and Hank are inseparable on and off the ice. Never is there a sign of dissention in the ranks. Only friendly competition without even a sense of envy. The Sedins take inseparability to a whole new level and there are plenty of other identical twins that share the same companionship.

Unfortunately, the nicknames ensue. "The Sedin Sisters" is the biggest one. And it's a term used from fanbases all over the NHL including our own (me included). Does it become an issue where it's just simply not cool to own a Sedin jersey for fear of being mocked? I hardly have to ask that question because I know it's true.

5. Looks Matter (tie this one in with #3). And the Twins just don't have it. Those are not faces to market a product around. The girls don't gush at them. There's no rock n' roll / sex appeal there. Not in their outward appearance nor, like I said before, in their demeanor. Humble. Soft spoken. Look at Hank's Hart Trophy speech.

After last season people are taking more serious note of our duo, especially from the often narrow-visioned eastern MSM, while Canucks fans mostly have always known what we have right in front of us.

-Give The Sedins The Respect They Deserve- Cassie Campbell

-Sedin Finally Get Some Respect - Faceoff.com

-How to tell a true, dyed-in-the-wool Sedin fan from the Johnny-come-latelies jumping on the bandwagon after Henrik's Art-Hart Trophy wins - Central Canada Canucklehead.

-Imagine if Brian Burke succeeded in making the Twins Leafs...

Anyways, the respect levels are there but the jersey sales are not. Is it going to take a Conn Smythe win for that to change? Who knows. Take a look at the list of Hart Trophy winners and you can see that in recent memory none of those names had problems selling respective jerseys...except for Hank.

I have 2 Canucks jerseys: a stick in rink Luongo jersey and an Orca home Mitchell jersey (sobs). Time to get a new Orca jersey. I think I'll make it a Hank, the first Art Ross and Hart Trophy winner in our history. The brothers will own many of the Canuc team's records when it is all said and done, plus he/they are most likely Canuck lifers. I'll get a lot of years out of that baby.

I've said my bit. I'm not trying to sway anybody but rather asking an honest question. So here is a poll, and I want you to be 100% honest with it and maybe explain the reason for your choice and other opinions in the comments section.