Share All sharing options for: 5 Reasons Why Section 312 Loves The Vancouver Canucks

I have been wanting to do one of these for quite a while now. The problem was coming up with 5 reasons why I love this team. For a long time I could only really think of one which is why that one reason comes in at number 1 on my list. Maybe it is because hockey wasn’t my first love sports wise and is still 3rd on my list of favourites. The way I feel about the Canucks pales in comparison to how I feel about Manchester United. The highs are higher and the lows and much, much lower when United win or lose. And then there is baseball. My first love. Watching the Cubs play is like an addiction. I can’t get enough of it. Even when they suck. It’s the lure of seeing a perfectly turned double play. Or a runner thrown out by a perfect throw when trying to take an extra base. The way a pitcher sets up a hitter with a pitch and then perfectly executes the next pitch getting the batter to ground out, strike out, or whatever the pitcher was trying to accomplish. I love everything about that game and always will. So I came to hockey a little later in life as my youth was spent playing and watching baseball and idolizing Ryne Sandberg, Mark Grace and Ken Griffey Jr.

So how did I end up being a Canuck fan?

I live in a part of the world where there are fans of other teams all over the place. Fort St John is a town made up of people from other places. Albertans, Maritimers, even Ontarians. And when those people move here they bring with them their fandom of teams like Edmonton , Calgary , Montreal and even worse than all the Maple Leafs.

As I have said before I absolutely hate those teams. I was raised to despise every other team than the one I root for and for hockey it is no different. There are few things that make me love the Nucks more and make me want them to win more than the morons in this town who bash them. There is maybe no bigger whipping boy team in the League than the Nucks. I hear the same things over and over. Never won a cup. Will never win a cup. Over rated team. Blah blah blah. Every time I hear a comment like that it just pushes me further into the loving the Canucks camp. The more Vancouver bashing I hear the more I can’t wait to rub our first cup victory in the faces of those who have taunted this team for far too long. We will prevail. We will have our victory and we will make our opponents pay!!! Viva la revolution.

Perhaps this was the period that taught me I was a Nuck fan or made me realize that fact rather than contributing to my fandom. But realization is just as important. I mean if I was still hoping the Canucks would win every night through this period when they were garbage then I must have been a true fan right? We all knew they were going to lose yet we kept supporting, rooting, cheering and more than anything hoping. You would have to be mentally unstable to go through all of that without a good reason. And I realized the reason was simple. I was a fan of this team. Plus let’s be honest. You can’t truly enjoy heady times like we enjoy now without knowing what it was like to be with this team through all of the garbage years. Without darkness there is no light. 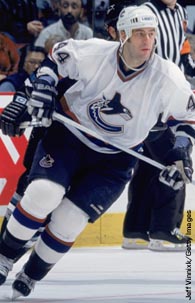 Maybe it says something about me as a person but I immediately fell in love with big Bert as a player from the moment he arrived in Vancouver . I identified with the immensely talented player who seemingly was throwing that ability away. I have had periods in my life where I was kind of floating and wasting a lot of the gifts I have been fortunate enough to receive. So here was my life embodied in one player. And then suddenly he turned his career around. The hulking winger who could skate and had such sick hands. 40 foot back hand saucer passes without looking right onto Nazzy’s stick. Effing sick. The way he could dominate a game single-handedly. So many things went into my love of number 44 as a player it is hard to get them all down coherently. But mostly he was just a player I identified with, a player who inspired me but most importantly just a player who thrilled me with his ability. Other than Bure no other Canuck has made me feel the excitement I felt watching Bert. Kesler is getting to that level but he is not there yet. For me Todd Bertuzzi is a huge reason that I love this team.

Is it any surprise that a play by play guy like myself would put three of the all time best play by play guys on his list? Luckily the point of this exercise isn’t to shock or surprise. I didn’t realize it at the time but listening to and watching hockey when Jim Robson was calling a guy was creating a deep desire inside of me to call hockey games. Jim Hughson and John Shorthouse continued to stoke that fire as they provided the Nucks with wonderful service and in some cases still do provide that service. There is nothing like hearing a well called game and Canuck fans are absolutely spoiled in that regard. Now that I am trying to follow a similar path and see where play by play can take me I look to men like Jim, Jim and John for inspiration. I have a strong desire to one day call games in the WHL and that is the level I aspire towards. But if I could one day call even just one Nuck game I would be incredibly proud to be in the same club as these greats. My love of play by play, hockey and radio can all be credited in some way to the 3 Js.

She is a bigger Canucks fan than I am. She lives and breathes the Nucks. She is a half season ticket holder. She owns probably a dozen jerseys. And she used to take me to games. Lots of games. 10 or more a season. Plus playoff games when we eventually made the dance. That four game sweep we suffered at the hands of the Avs is still a great memory for me. We gave that team a 3 or 4 minute standing ovation at the end of game 4 just to say thanks for delivering this franchise from the non-playoff oblivion we were so used to suffering. Because of my sister I was able to attend a lot of important moments in Canuck history from game 7 wins to goals from center and of course game 7 losses. This is a woman who takes the day off to watch the trade deadline coverage, even though she knows the Nucks never pull of a big trade. Her hope, dedication and love for this team are the key reasons I too am a Canuck.