Share All sharing options for: Oilers At Canucks Game Thread 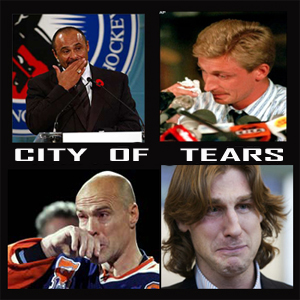 Giroux-Horcoff-Eberle. Giroux was acquired as a free agent by the Oilers this summer. He has been an AHL scoring machine over the past couple years for the Capitals' affiliate Hershey Bears. At 29 years of age his time is running out. The rest of the Oilers' lines look like this:

So no Taylor Hall or Magnus Paajarvi.

*Moran* as in Brad Moran, as in former Canuck / Moose. The 31 year old Abbotsford native has played his last 2 seasons in Europe (SEL) after the Canucks let him go to free agency in the summer of 2008. Look at his stats with the Moose 2 years ago. I really thought he'd make the Canucks roster more than he did. Bit of a small guy, but he has some solid skills.

A can of whoop ass just waiting to happen. This should be a very physical affair and maybe we'll see a bonafide scrap this time (that doesn't involve Oreskovich getting his ass handed to him.)

There are 2 Canucks players that I anticipate watching closely tonight: Luongo and Hamhuis. Seeing Hamhuis in a Canucks jersey...gonna be something.