Share All sharing options for: Hide the Kids: Nucks Misconduct Meet Up 2010 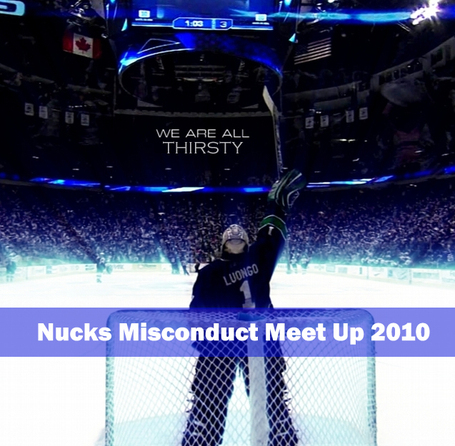 Dennis: You're drinking a beer at 8:00 in the morning!
Mac: Whatever, dude. Irrelevant.

- It's Always Sunny in Philadelphia

Your humble and geographically dispersed NM managers have batted the idea around for some time, but since Zandberg is going Dadberg soon (congrats again sir) we may as well get this going before he - or others out there in the NM army - become responsible and respectable human beings.

We're formally tabling a NM Meet Up for the first part of the 2010-2011 season. The night could take a few different courses: we meet at a pub and watch a game or we pregame somewhere, head to GM Place Rogers Arena for the show and then unleash our inner Shane O'Brien afterward until the break of dawn or the police ask for identification. We'll figure those pesky details out later.

In the meantime we recognize many of the army are also in other cities or timezones so we wanted to get it in front of you now in order to plan accordingly. That just leaves what game we center the evening around and we leave that decision up to you in the poll.

More details in a bit, but we hope you can make it. It should be epic.