Share All sharing options for: 5 Reasons duru200 Loves The Canucks

This is the story of an East European who fell in love with the game invented in Canada and played really well by some 20+ men dressed in white blue and green at the GM Place(damn telephone booth arena now).

1. Electricity. That's what I felt 4 years ago when I got dragged by a friend to my first Canucks game. The speed, grit, fights captured me in the last row of the upper level bowl and I didn't care that I didn't know that 22 and 33 might be related somehow. They lost but I think Naslund or Morison had a breakaway goal when I felt that our forward is flying 100km/h towards the unlucky enemies' goalie. The Crowd exploded and I felt like being at the Champions League final ... Which brings the next reason:

2. Football (or the lack of it). I know the CFL/NFL fans will rip me apart, but let's get this right: when a game is played with hands should be called handball, and btw the World Cup is organized by FIFA(Fédération Internationale de Football Association). So coming in Canada in 2002 it was the year my country didn't qualify for the WC after 3 consecutive participation, therefore left with no team to cheer for. And what was the alternative? Baseball? Pffff ... basketball? Dropped out of my preferences since Air Jordan retired. And since freezbee is not on tv in prime time I choose the Nucks.

3. Kevin Bieksa. Hey trade him all you want NOW for prospects, 2nd draft picks or bag of pucks, but when I went to my second game in 2007 he was The Man. The dude was hitting everything in sight, leaving melted opponents on the boards, jumping in the rushes and fought like a pit-bull, my wife thought for months I had a man crush on him and asked for divorce. Well, not really because she also loves and tickles the Italian... 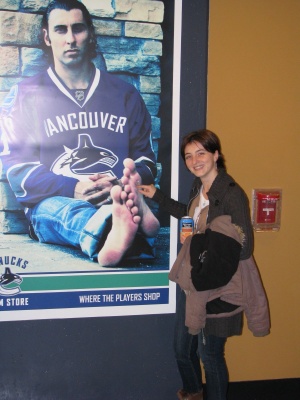 4. The fights and fighters. It is big surprise for me that people are claiming this team lacks grit and punch power when Hordy, Rypien, Bieksa, SOB drop the gloves and entertain the raging crowd. Sometimes they win, sometimes they lose, but never give up, even if they are small(hopefully this won't repeat this season) or twin sisters but the old enforcer Vigneault is always smirking from the bench afterwards

5. The small step missing. I never cheered for the permanent winner, always supporting the underdog gives me the better feeling and in the Canucks land there is always hope that they will make that small step that separates the good from the great. You can see that in every April, the band wagoners pull their jerseys and mount the stick flags on their SUV, everybody is in love with the gold medal 12 year beach ball  stopper from Quebec, only to see weeks later that the second round winners (Chicago, the Ducks) over orca boys, won Lord Stanley's Mug.

As all my predecessors, i cannot forget the online community (Nucks Misconduct, HF Boards) that taught me everything i need to know about the game and an infinite list of acronyms (LTIR = synonym for SALO, PPG = Sedins, NTC = Luongo, SHG = Burrows, WTF = unfortunately Bieksa) that any wannabe Canadian should be asked at the citizenship exam.