5 Reasons Why I Love The Vancouver Canucks

Share All sharing options for: 5 Reasons Why I Love The Vancouver Canucks 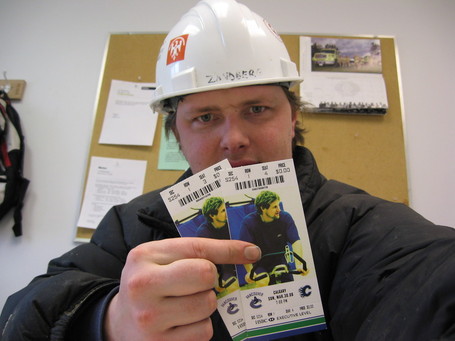 As many of you know I shamelessly was a bigger fan of the Maple Leafs growing up, since we had peasant-vision on TV (rabbit ears) and I only watched the Leafs play mostly on Hockey Night In Canada. I would like to thank my father for getting me into hockey in the first place when I was about 3 years old in 1977. So Tiger Williams, Darryl Sittler, Lanny McDonald and Mike Palmateer were more familiar names to me back then. It's kind of a blur when I started following the Canucks at all, but I know it happened:

1. Through hockey cards, schoolyard chatter, and newspapers before 1982. I think 1982 was a defining moment because during the Canucks' playoff run CBC actually showed me some Canucks games! That is when I started hopping on board. After that, I'd watch any game I could on BCTV with Jim Robson doing the play by play. Bless his heart. Jimmy was the best. If I missed games I'd either stay up late and sneak to the TV upstairs and watch News Hour Final at 11:50 PM to catch the highlights and hope my parents didn't hear me. Other times I'd catch the highlights on the noon News Hour or the 6:00 pm News Hour with Tony Parsons. Remember John McKeachie, Bernie Pascall and now Squire Barnes? Hell yeah! They were my source for Canucks information for a long time in my younger years. All simply awesome at what they do/did. They are permanent fixtures in my memory.

I've already talked enough about those 2 teams in recent weeks. Inspiring, heroic, heartbreaking, breathtaking...Not gonna lie, when Greg Adams buried the Leafs in OT in Game 5 of the 1994 semi-Finals I was torn. Damn that Leafs team was good and that was a brutal and nasty 5-game series, but those crazy Canucks showed serious resolve. To make matters worse, Wayne Gretzky had killed the Leafs in Game 7 of the semifinals the year before. Anyway, what more can be said about the captains of those 2 Vancouver teams: Stan Smyl and Trevor Linden? What more can be said about those captains' respective teams in those 2 glorious runs?

3. Satellite and Cable TV. I grew up a country boy (with peasant-vision like I said before) until I left the parents' roost around 1995. Then I moved into an apartment in town and got me Cable TV so I could watch more hockey games. Those were lousy times to be a Canucks fan as the team was pathetic. Sure, I loved certain individuals on those squads: Bure, Mogilny, McLean (even though he started sucking), Messier (damn you son of a...)! etc. Words cannot express how I wish Mark Messier's tenure here could have been more fruitful. I was a huge fan of his growing up. I can remember thinking great times were ahead under the Messier-Keenan era. Alas we all had our hearts ripped out and thrown to the wolves to devour.

4. Live Games. I never did see a live game at the Pacific Coliseum. A tragedy to be sure. My first live Canucks game experience was in 1996, I believe. The Rangers came to town and Messier, Nemchinov, Kovalev and company destroyed us 6-3 I think. It was like watching men vs boys. Whatever...I went with my Uncle Glenn and the experience was incredible. We bought our tickets off scalpers and got great seats at $100 a pop. I can still remember walking through the corridor and seeing the ice and the lights, the superstars on the ice and being starstruck because hell, I had these guys' hockey cards and had immortalized them back in secluded Smithers. I've been to 3 other games in Vancouver since then: 2 against Calgary and 1 against Detroit, all in recent years. All victories. The second-last game was most memorable because we spanked Calgary and Trevor Linden, in one of his last games as a Canuck, was the game's first star. Dan Murphy tried to interview him after the game but we wouldn't let him. We chanted "Trevor! Trevor!" so loudly that Dan couldn't conduct the interview. The smile on Linden's face was priceless. 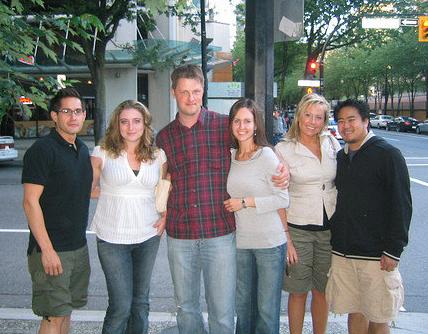 5. Friends, Fans, and the Blogging Community. It was about early 1996 when I first started surfing the internet on a regular basis. It was then that I found, through my best friend AJ, the blogging world. He showed me Alanah McGinley's original site Canucks And Beyond through which I found JJ Guerrero's Canucks Hockey Blog, Mike's Yankee Canuck, Miss 604 the Crazy Canucks podcast, and a host of other NHL sites. From there I started my own site Waiting For Stanley and have been hooked on writing about the Canucks and hockey ever since. It forced me to follow the Canucks more closely that I ever had before. Aside from that, it is and has been great meeting Canucks fans online through Alanah and the others' sites, WFS and here. This team has a passionate fanbase that I am proud to be a part of. You all kick ass.

As for watching Canucks games nowadays, I have to give a shout out to 3 Nuckleheads for graciously welcoming me into their home to watch nearly every game with them and for putting up with my drunken ass. Almost nothing beats watching the game with friends who love the team just as much as you do: the high fives, the cursing, the alcohol consumption and spilled drinks. No thanks to their dog though. One time I jumped up and cheered when Vancouver scored and the dog jumped up and bit me in the ass at the same time. Fucker. Moments that will live forever.

OK, I've rambled on long enough. Now it's YOUR turn to tell us 5 reasons why you love the Vancouver Canucks. Don't be shy. Shoot an email to either Yankee or myself and we'll post it on here.