Five Reasons I ♥ The Canucks

Share All sharing options for: Five Reasons I ♥ The Canucks

"Five Reasons I Love the Canucks" is a new feature at Nucks Misconduct, inspired by Puck Daddy's "Five Reasons..." series. It features Canucks fans explaining, in their own words, the reasons for their passionate support of the team, and offers readers a chance to contribute their own stories to the site. Please email Sean Zandberg or Yankee Canuck if you would like to submit a 'Five Reasons..." list.

Here are 5 reasons why I, Missy, love the Canucks:

My Canucks fandom comes from my dad.  When I was a kid, my dad was always watching the Canucks games on television.  Even while us 3 kids were all taking our turns practicing piano in the living room, he would still often have the game on anyways with the sound turned way down.  Also, it was a very rare occasion when the radio in his truck wasn't set to Team1040.  My grandfather helped with the hockey fandom as well, since he's also a Canucks fan, and he often took us to the home games for the local Campbell River Storm junior hockey team.

When I was a young teenager (I'm 20 now), I started paying closer attention to the games, and even started asking my dad about rules like "icing" and "offside".  I graduated from high school in June 2008, and went straight to the University of Victoria in September.  For someone who never gets homesick, I was surprised to find that I missed a certain experience from home: having the Canucks games on all the time.

At the time I discovered I was missing Canucks hockey in my environment, I was living in residence on the UVic campus.  With the dorms being overbooked that year, they had to put beds in a few of the building lounges.  This meant there was only one television for the 100 students in my building.  Although there were other Canucks fans with whom I watched the occasional game (including that awesome season opener against the Flames), the television was often taken up by football, Gossip Girl, or other stuff.  My one resort was the live radio feed on the Team1040 website.

Sometime in late October or early November of 2008, I was perusing the Canucks.com website at gametime, when I found a live chatroom on it.  I joined the conversation, and this is where I first met Yankee, Sean, and Alix.  For the next several games, I came back to this chat at gametime and continued talking to these bloggers.  At this time, I also started writing my own blog "The Canuck Puck Bunny" (which turned out to be a failure), and I started following Yankee's old site.  During this time was when my Canucks fandom went from "casual" to "diehard".  In February 2009, when Yankee abandoned his site to join forces with Sean and create Nucks Misconduct, I followed him over and kept reading.  At the end of March (surprisingly, the same day as this gongshow), I finally registered and became part of the community here, and as you probably all know I eventually found my NM niche. 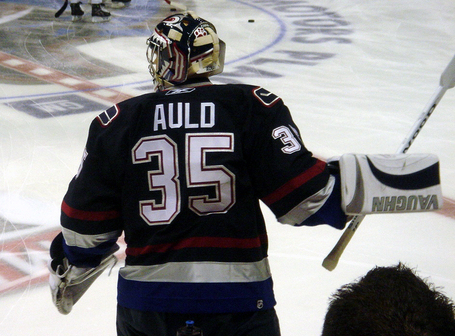 Okay, I'll bet you are wondering how this dismal season could be one of my reasons.  Here's my explanation: this is the season where I first started paying attention to the Canucks.  In November of this year, Dan Cloutier went down with the injury that would end his time as a Canuck, and Alex Auld filled in for the rest of the season.  To be completely honest, I loved Auldy, and still have that soft spot for him today (I think Andrew Raycroft may have also earned a similar soft spot now).  This was also the season where Henrik and Daniel Sedin started coming into the spotlight, with Anson Carter as their 3rd piece.  I remember that line being spectacular.

Unfortunately, I also remember the 2nd-last game of that season.  It was a very tight race between Vancouver and Edmonton for the last playoff spot.  Both teams were playing that night, with start times an hour apart.  At the end of the 2nd period for the Canucks game, we got the word that the Oilers had won their game and taken a 3-point lead over the Canucks, and that if Vancouver didn't win their game they'd be eliminated.  Well, they lost the game, and finished 9th in the conference.  (This was the year where the Oilers made that Cinderella run, the Hurricanes beat them in the finals, and local native Rod Brindamour brought the Cup to Campbell River.)  That summer, that big trade with Florida was made, and I was sad to see Auldy go.  Little did I know at the time that the goalie we got in return would end Vancouver's "goalie graveyard" era. 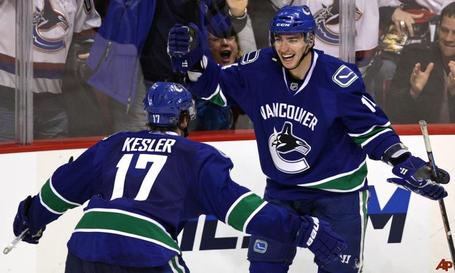 It was February 3rd, 2009.  The Canucks had just lost 9 straight home games, and I was on the verge of losing faith in the team (as many others were).  They were playing against the Hurricanes that night, and I was listening on Team1040 while doing homework.  The game was tied 3-3, and the Canucks took a penalty with 3 minutes left in the game.  I immediately thought "Okay, Kesler, now's the time for a short-handed goal.  You are the team leader for those, right?"  I went and checked, and it turns out that Burrows was the leader.  And just as I closed the window, Kesler sent Burrows on a breakaway for the game-winning shortie that would start the team's huge comeback from the bottom of the conference.

Since I didn't pay such close attention to the Canucks until that season, I didn't know who Alexandre Burrows or Ryan Kesler were before then.  I remember the interesting mid-season experiment Vigneault tried of splitting up the 3rd-line pests, putting Burr with the Sedins and Kes with Mats Sundin and Pavol Demitra.  At first, it didn't work so well.  But after that shortie, magic began to happen.  Burrows became an even better match for the Twins than Carter ever was, and Kesler flourished under the guidance of Mats to become one of the best 2nd-line centers in the league.  And, of course, they're still a terrible twosome when together, whether they're scoring or trashtalking.

Okay, so the Canucks are and seem to have always been a little undisciplined, causing many fights and brawls over the years.  Although I was either not born yet or much too young to enjoy it, there are many clips on YouTube of old fights involving Canucks.  From bench-clearing brawls in the 80's to goalie fights in the 90's, I sure missed some fun.  Even though the NHL has enforced more rules in the new century and the players and coaches are much more peaceful, there are still fights every once in a while that make the game so much more enjoyable.  And, of course, the Canucks will provide it.

I love how truculent this team is.  We have NHL middle-weight champion Rick Rypien, who will take on any giant again and again and again and again.  We have Darcy Hordichuk and Tanner Glass, who can both throw punches as well.  It also helps when the coach used to be a fighter.  And, of course, let's not forget the brawls we've had in the last few years that bring back old-school memories, whether it's a division rival or the enemy of 1994.  Since I am a very peaceful person whose life is full of peace and content, watching this is where I get my thrills for violence.

Well, those are my reasons for why I love this team.  Who knows, maybe sometime soon I can actually watch the Canucks make it back to the Stanley Cup finals, and hopefully I will still be quite young when they finally win it all....