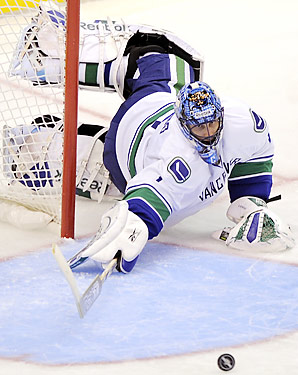 Not everybody is taking anxiety pills over the NHL powers that be "looking at" Roberto Luongo's 12 year contract. Many, including the Globe and Mail's Matt Sekeres look at the event as a potential window of opportunity for Vancouver to either flog a struggling goalie because he is, well, struggling, and also to let him go thus saving a lot of cap space because hell! you don't need a big money goalie to win the Stanley Cup as this year's playoffs "proved".

I find myself angered and dismayed. Why?

-because we finally get a world class goalie, after all these years, after all those shitty goalies we endured and already many are out to crucify Luongo, after 2 less-than stellar seasons where he looked shaky.

-because the above, in my opinion, is a big reason why so many NHL players won't play here. Does Dan Hamhuis really know what he's got himself into? He's the highest paid Canucks defenceman and if he struggles, many fans will be asking for his head on a platter. You know it's true. The same has already applied to Luongo. Hey, I'm guilty of verbally badgering Lou too, but not to the point of giving up on him.

Canucks general manager Mike Gillis is not commenting on the decision at the NHL’s request, but you have to wonder whether he smiled wryly when Bloch tossed out Ilya Kovalchuk’s record-breaking deal with the New Jersey Devils.

Really? I don't think so. I think Canucks management has full faith that Luongo will return to form. After all, they did bring in a full time goalie coach in Roland Melanson for this season, they made him captain, signed him to a lifetime deal, he's a jackpot for marketing, etc etc. I think it's pretty clear what their intent is.

Would you really be comfortable with a Niemi-Schneider combo?

I have come to the conclusion that I am willing to give Luongo another chance. Yes I'm siding with management. The trends of what kind of teams that win Stanley Cups come and go like clothing fashion. This year it's cheap goalies. In the past it was younger teams with size (see Anaheim). It wasn't that long ago that teams with depth and a money goalie won it all either. I'm not hopping on that bandwagon, or any bandwagon. I want this Canucks team, from Luongo-out to play a solid team game, and THAT is what has been lacking the most. THAT is what wins championships.

But enough of what I think. I respect anyone's opinion most of the time. So without further to do, here is the poll (finally). Your comments are welcomed as well. I know we've almost kicked this dead horse to pieces, but this whole Kovalchuk aftermath has brought the topic back to center stage.

If the NHL voided Roberto Luongo's contract you would be: