Share All sharing options for: Reliving The Bra Power Experience 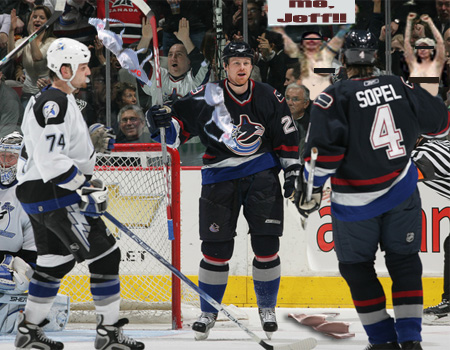 Jeff Cowan and the legend of Bra Power was not quite born overnight, and may never have happened had Josh Green not gone down to injury on March 1, 2007. The legend of Bra Power was something that took about 4 games of Cowan domination to take place. Cowan, who was pissed off (in his own words) by the Kings' (under coach Marc Crawford) lack of faith in him earlier in the 2006-07 season, was put on waivers at Christmas Time December 2006. The Canucks picked him up off the waiver wire on December 30. Cowan only had 2 assists in 21 games with minimal icetime with the Kings up to that point. Over the next 23 games with the Canucks, Cowan received the same amount of icetime as he saw in LA, and had ZERO points. He was a 4th liner and his time in the NHL was at risk.

But then something unforeseeable happened on March 1, 2007, as Cowan played a bigger role in Green's absence. At 12:10 of the 2nd period against the Coyotes, Cowan was on the ice in a penalty killing role. He blocked a pass from a Phoenix point man and broke in alone on Curtis Joseph, putting a wrist shot over Cujo's glove to make it 2-1 Canucks (see the goal at the 50 second mark of this clip.) Cowan also got into a scrap with Josh Gratton earlier in the game. His tough play earned him first star of the game honors. Something clicked in his brain.

The Canucks won that game 4-3.

3 nights later the Wild came to town. With the Canucks down 2-1 early in the 2nd period Cowan struck again...TWICE in a 10:00 span. Both goals came off deflections from point shots by Willie Mitchell (see the 1:21 mark of this clip). The Canucks won that game 4-3 in a shootout and Cowan was once again the first star of the game.

2 nights later Shane O'Brien and the Lightning pay a visit to the Garage. Cowan scores the first goal of the game 8:44 in. Late in the 3rd period with less than a minute to go this happens:

Bra Power is born! Holy hell, what a play by Jan Bulis! Bless the woman who threw her undergarment onto the ice. That is classic stuff right there. Immediately after that game fans were searching for nicknames for this red-headed beast. Names like Cowman, Milkman, Double D, Big Red were mentioned but some smartass came up up with Cowan The Brabarian, and that person deserves to drink for free at a Vancouver pub for the entirety of his life as the nickname will live in Canuck infamy. Just think: Cowan had not scored a goal in 52 games prior to that streak.

Dave Nonis said he had never seen anything like it. Cowan quipped: "It's a funny thing. Of all things to be thrown at you, a woman's bra. It's pretty crazy." The Canucks won 5-1. Cowan and O'Brien each received 10-minute misconducts after the goal as they were in eachother's faces all night. Cowan was the 3rd star of the game and now had 5 goals in 3 games on 10 shots. The Canucks had scored 12 goals as a team in those 3 games. Do the math, Cowan was on fire!

The Canucks then traveled to Phoenix, where Cowan made it 1-0 7:50 into the game. A sweet goal. 6 goals in 4 games! The Canucks would win 4-2. They had won 4 straight games when the red hot Cowan went on a tear. He ended up with 6 goals on 11 shots before drying up offensively. As Cowan heated up, Alain Vigneault had him playing on a line with Matt Cooke and Brendan Morrison. You can see from his game-to-game stats that AV went to the Cowan Well off and on over the ensuing games. He may as well have because that Canucks team lacked offence.

The Canucks would sign the Brabarian to a 2 year deal that summer but he suffered a hip flexor injury in this fight with Zach Stortini on October 13, 2007 and then 2 months later he separated his shoulder after this thunderous hit from Georges Laraque against the Penguins. He returned a month later but scored no points in the 30 remaining regular season games with Vancouver. He was put on waivers in the summer of 2009 and claimed by the Buffalo Sabres. He has not played in an NHL game since. He is currently an unrestricted free agent.

Jeff takes exception to a Boogaard hit on Bieksa and fearlessly drops the gloves with Goliath (March 2008).

Cowan wasn't a great fighter, but you had to admire his tenacity and fearlessness. Most of all, as Canucks fans, we must pay homage to him for providing us a memorable, although brief March to remember in 2007.

A side note: on March 14, 2007 the Canucks held an auction with autographed items up for bid. Among the items: a mannequin wearing a bra that was signed by the whole team. Not sure how much that was sold for. (source: Vancouver Province)