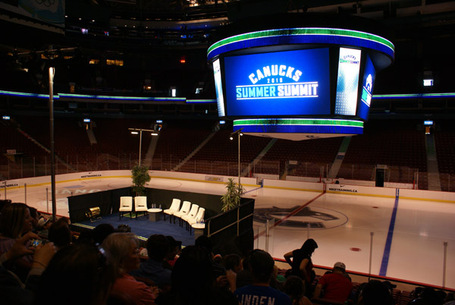 Yesterday I was able to attend the Summer Summit. By now you all know the announcements, so I'll skip those and talk about what it was like to attend. For the record, I am not a season ticket holder, but I do know someone who knows one. I've never attended an event like this so you'll be able to see it through my virgin eyes.

I've always wanted to say this: more after the jump.

The day's events began with a parking fiasco, as it almost always does if you drive to GM Pl... Rogers Arena. Two lines of idling vehicles wound along Pacific and Expo. Apparently 5 minutes before the doors are scheduled to open is too late to park underground. Who knew? After stealing some poor resident's spot around the corner on Quebec Street, we braved the 33 degree heat and trekked back.

Inside was mercifully cool, and a pleasant gentleman handed me a raffle ticket that would ultimately enter me into a draw to win one of four 40th Anniversary vintage sweaters, signed by a player of my choosing, or a single similar sweater signed by the entire team. I would win none of these things. 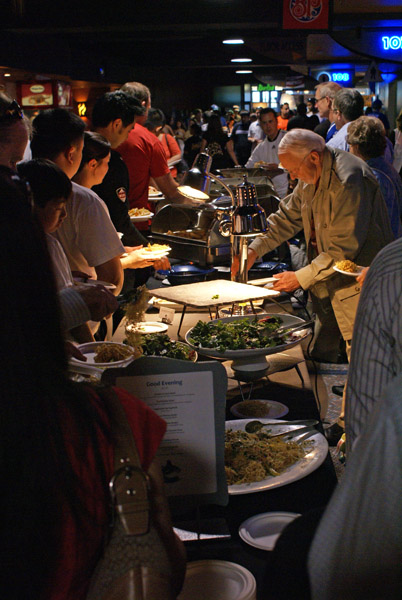 As we walked the area around gate 3, we were greeted by tables of untouchable food. The River Rock bar area was filled with cheesecake and cookies, and walled off by a sturdy black crowd barrier. Some guy with a radio eyed me when I went near it. Once the troughs were uncovered, we were greeted by ice cold thai noodles, half decent spring rolls, prime rib slider burgers, chicken and mashed potatoes, vegetarian pizza and various other items.

Until that time we buzzed around, fretting at the size of the line required to see the Art Ross and Hart trophies. So we decided to see what was happening in the rink. 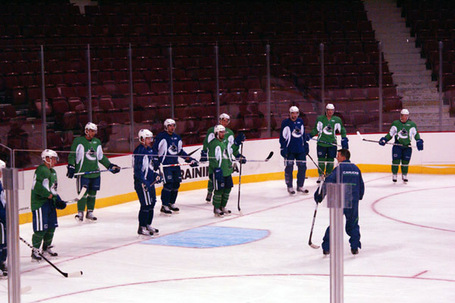 At one end, various forwards and defenseman were engaged in skating drills with Canucks staff. At the other, two goaltenders were stretching and sliding around. The skaters' end was packed and I was unable to get close without blocking everybody's view, so we headed over to the goalie side. I was very interested to see the type of coaching that Roberto would be subjected to in the coming season. 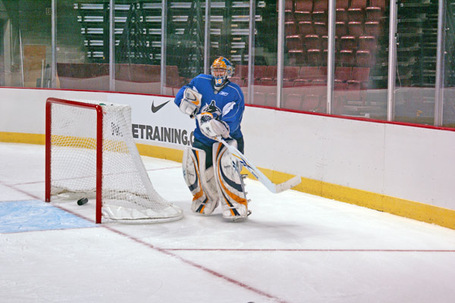 Teaching you how not to be Roberto Luongo. 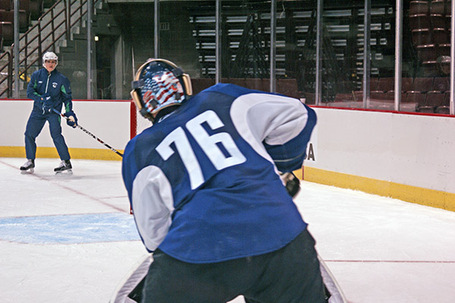 Roland Melanson seems intense; although the skaters seemed to be taking the practice lightly, the goalies were not allowed to. Melanson corrects any mistake he sees. The goalies were drilling on playing the puck outside of their creases and I thought they both looked fairly good. But I must've had my Lu glasses on because Melanson saw problems and dealt with them immediately. Both goalies were having trouble with their glove hands when taking shots, and they heard about it. From my admittedly limited look at our goalie coach, if our captain is able to take criticism then we should see improvements this season. 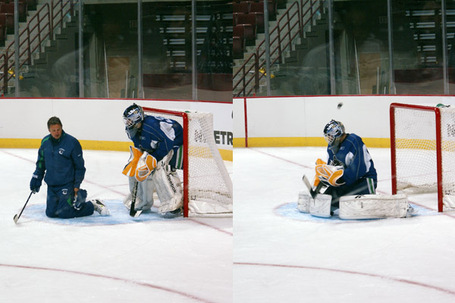 Back on the skater side, it was mostly conditioning with a little bit of stick handling. None of the practice jersey numbers were known to me and none of their drills really showed off the skills of top Canucks prospects. The only thing I could say was that #73 was quite a skater, quicker and more agile than anyone on the ice. Go him. Near the end of the practice session, team green played team blue in a 3 on 3 width-wise scrimmage. It was very fast and in no way indicative of anyone's in-game skill, but it was fun to watch. The whole practice was a lot like a zoo; fans were watching and pointing from behind the glass and a lot of players seemed unsure how they should be acting. 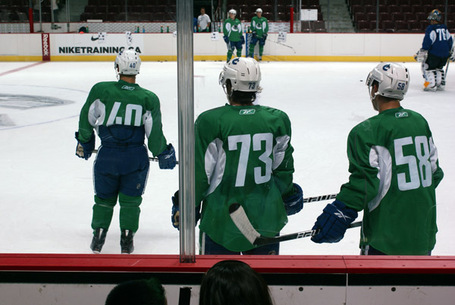 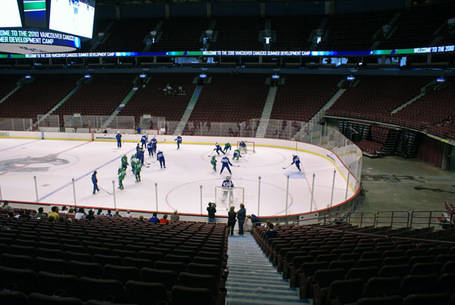 At about this time we realized a bunch of people eating. When we entered the concourse the buffet lines stretched for miles. To us, that meant that the trophy line wouldn't be quite as long. So we gave it a shot. 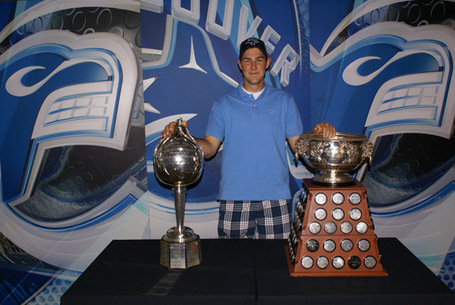 Note: This is not me. 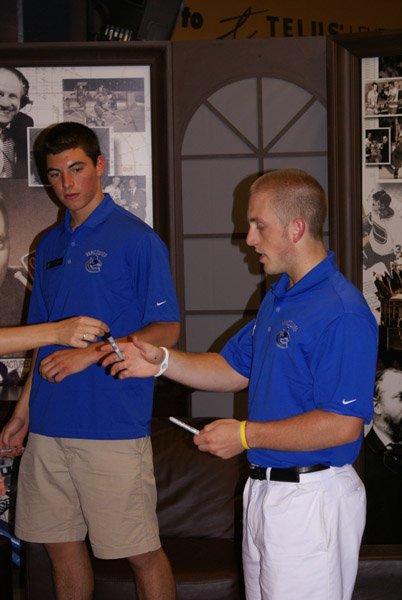 Afterwards, we headed down to the opposite end of the exhibits to check out the Canucks prospects. Again, the line was really long, so I stepped around the side and snapped a few shots. It was a "two at a time" setup, so when we arrived it was only Patrick McNally and Jordan Schroeder. McNally is tall and slight of build, Schroeder is short but has a bit more muscle on him for his size. I dwarf them both, but I fail at skating. Go figure. Both seem like nice kids. Schroeder seemed a little more composed with all the flash photography and McNally was a little doe-eyed. After taking a peek in the Canucks store (20% off everything!) we went back to find a lucky row of seats to sit in. 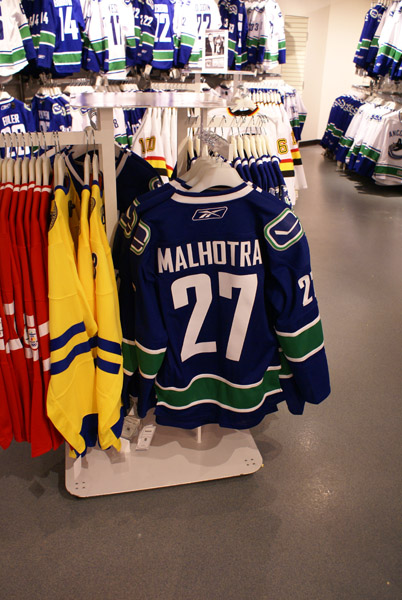 We chose Kesler Row. A single row would be chosen to take a tour of the dressing room with Misters Hamhuis and Malhotra. It wasn't our row. You diehards saw the live streaming press conference so I won't say much about it, except that it was lighthearted on the interviewer side and pretty awkward on the interviewee side. Gillis was deadpan and sweating like a madman. de Bonis may have been on a downer after a night full of Cocaine. Smyl was genuine and honest. Robson was full of life and answered more questions than he asked. Kurtenbach was kind of a mannequin for the new jersey, but Stan told a really nice story about him. 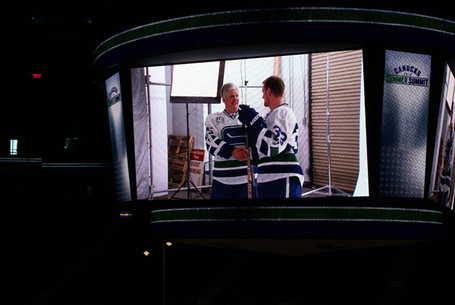 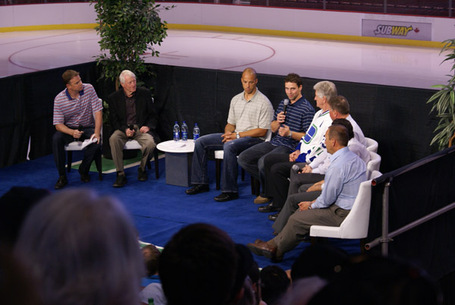 The new guys came out to a very loud ovation. Hamhuis said something about the crowd size looking like a home game in December from his Nashville days. The interview from there on got a lot more lighthearted, until some very awkward questions from the crowd. When one fan asked why the Flames and Oilers had so much cooler introductions, and why we didn't have a whale somewhere, Gillis said he'd rather have a hockey team. That got a huge laugh.

After that it was pretty much wrapped up. And then we had to go back outside.

It was a good way to kill an afternoon but I forgot to pack my pockets with leftover food. Maybe next year.