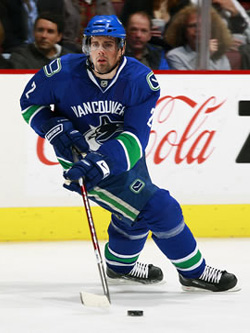 CapGeek.com is basically breaking 2 stories tonight (with the glorious help of Twitter). According to the site Alexandre Bolduc has been signed to a 1 year 2-way contract worth $500,000. That is a $40,000 pay cut from last season. The 25-year-old Bolduc is one of those guys that you hope can step up into a role on the Canucks' 4th line. He had no points in 15 games with the Canucks last season and 2 goals and 3 points in 13 games with the Moose. Now, you look at that and wonder why he missed so much time...well..blame Minnesota Wild beast John Scott, sort of. Bolduc had shoulder problems already in October 2009, but then in January he fought Scott and..he got his ass handed to him. But full marks for the smaller Bolduc taking on the much bigger Scott. Unfortunately, Bolduc wrecked his shoulder in that fight and had to undergo surgery.

I like him. He brings tenacity. He HAS to or he doesn't make the team. I didn't know this guy was 25 already. Geez. He had better impress soon or he may become a career AHL'er.

OK, now on to Dan Hamhuis. According to Cap Geek,  Dan is going to earn $9 million in signing bonuses with the Canucks ($2 million in each of the first 3 years). Whoa. The cap hit remains $4.5 million for each of his 6 years here. It also says here that Dan will make $5 million for the first 2 seasons and then $4.25 for the remaining 4 years.

BTW, Manny Malhotra has a "limited" no trade clause on his contract. What is "limited"? Well if it is anything like baseball, it means that there are only certain teams that the player can NOT be traded to. Correct me if I'm wrong.

More from CapGeek: the Canucks may be penalized $90,000 on this year's cap for performance bonuses earned. Which player are they referring to?