The Decline Of Western Civilization: The Dismantling of The Canucks' 1994 Roster

Share All sharing options for: The Decline Of Western Civilization: The Dismantling of The Canucks' 1994 Roster 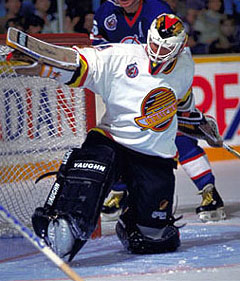 I am going to do my best to give you a timeline of when and how the Canucks' super team of 1994 was dismantled.

The first big change started with Pat Quinn after the '94 playoffs, who handed the head coaching job to then assistant coach Rick Ley so he could focus on his roles of being President and GM. In a lockout-shortened season, the Canucks under Ley had an 18-18-12 record in 1994-95. That ranked them 2nd in the Pacific Division and 6th in the Conference. How times have changed, huh? Vancouver would beat the Blues in 7 games in Round 1 and then get swept by the Blackhawks in Round 2 (yeah, those back-to-back OT goals by Chelios...UGH). Lousy defence. Lousy I say! And it was all downhill from there. For the record, Rick Ley only lasted 121 games as a Canucks coach and was temporarily replaced by Quinn for 6 games and then Tom Renney was hired soon after.

So, on to the roster changes...

-In the January 1995 waiver draft the Canucks lost defenceman Brian Glynn to the Whalers. Glynn only played 2 more seasons (plus 1 game in the 3rd year) and that was it for his NHL career at the age of 30 years old.

-On February 15, 1995 the Canucks traded tough d-man winger Shawn Antoski to the Flyers in exchange for Josef Beranek. Beranek was an offensive fail and was flogged to the Penguins 2 years later for a bag of peanuts. Did you know Antoski was a first round pick by the Canucks in 1990? I didn't. Antoski's NHL career ended when he crashed his car and suffered a skull fracture in November 1997. He was a pitbull. And he was a bit nuts, in a good way.

-Murray Craven, one of my faves, played a huge 2-way role on a line with Pavel Bure and was a vital cog in the Canucks machine in 1994. Unfortunately, he held out in the beginning of the 94-95 season because of, how Wikipedia puts it, "a result of uncertainty over his free agency status." He was traded to the Blackhawks in exchange for Christian Ruutu on March 10, 1995. Poor Craven never did win a Cup. He appeared in 2 Stanley Cup game 7's (Canucks and Flyers).

At the April 7 trade deadline they made some key changes:

-A disheartening move was sending the beloved Greg Adams, Dan Kesa and a 5th round pick to Dallas in exchange for Russ Courtnall. Russ joined his brother Geoff on the team and made an immediate impact, scoring 18 points in 13 games down the stretch and 12 points in the 11 playoff games that year. Adams played 7 more years in the NHL with Dallas, Phoenix and Florida.

-Gerald Diduck, the reliable, bruising defenceman, was sent to Chicago in exchange for Bogdan Savenko and a 3rd round pick in 1995, which they used to select Larry Courville. Don't everybody jump up and down at once! Cue the Ukrainian jokes on Savenko, who never played a game in the NHL. Courville may as well not have either. Left winger Larry played 33 games for the Canucks (over 3 years) and scored NO goals, and..never played in the NHL after that. In his 8 remaining NHL seasons, Diduck played for Chicago, Hartford, Phoenix, Toronto and Dallas. He could not stay healthy after his years with the Canucks. He was 35 years old when he retired.

-Nathan Lafayette, famous for hitting the goal post in the 3rd period of Game 7 against the Rangers was traded to that evil team in exchange for Corey Hirsch. Lafayette actually had 2 goals and 9 points in 20 playoff games in 1994. He never play a full season in the NHL and dwindled into obscurity, being done at the NHL level by the age of 27. I wonder if that shot off the post drove him to drinking....or Christianity.

-Jiri Slegr was traded to the Oilers for Roman Oksiuta. The sniper Oksiuta showed some promise but was traded to the Mighty Ducks the following season in exchange for Mike Sillinger. Slegr did not play for the Canucks in the '94 Finals. If I recall correctly he was the 8th defenceman on the depth chart.

A lot of grit was lost in those moves with not much of it coming back.

-Here is a list of Canucks players from the 1994-95 season and their stats. It appears that 13 of the 20 Canucks that played in the 1994 Finals were still on the team.

-July 8, 1995:  the Canucks traded Sergio Momesso to the Maple Leafs for Mike Ridley. That same day they acquired Alexander Mogilny from the Sabres for Mike Peca, Mike Wilson and a 1st round pick, who the Sabres would use to select Jay McKee the following summer. Momesso played parts of 4 more seasons in the NHL before playing out the remainder of his career in Europe.

-July 14, 1995: Geoff Courtnall signed in St. Louis as a free agent, soon to play on a line with that damned Demitra.

-December 19, 1995: Vancouver trades Jeff Brown (amidst rumors that he was banging another Canuck player's wife) and a 3rd round pick to Hartford for Jim Dowd, Frantisek Kucera (oh dear god, no) and a 2nd round pick

-After the summer of 1996, only 7 players from the 1994 Finals roster remained: Linden, Gelinas, Bure, Lumme, McLean, Hedican and Babych. Not gonna lie, that team looked like crap on paper. Played like crap too.

ERASING THE FINAL PIECES OF THE PAST

-Pat Quinn was fired in November 1997. He was eventually replaced by Mike Keenan on sort of an intern GM basis until Vancouver hired Brian Burke as the actual GM in June of 1998. Keenan also replaced fired head coach Tom Renney. Drink up, as Yankee would say.

-On January 3, 1998, Kirk McLean and Martin Gelinas were traded to Carolina for Sean Burke, Enrico Ciccone and Geoff Sanderson. McLean put up decent numbers with Florida 2 seasons later but that was about it in his final 5 seasons in the NHL. The stand-up style he possessed had gone the way of the dinosaur. After McLean's departure, the Vancouver became a goalie graveyard. Gelinas was one of those guys I wish we never got rid of. He always gave 100%. He made 2 more appearances in the Cup Finals (Carolina-2002 and Calgary-2004).

-February 1998: Trevor Linden was traded to the Islanders after going through some dark times with Mike Keenan. Hey, no worries. We got Bertuzzi, McCabe and a 3rd round pick in return. That pick turned out to be Jarko Ruutu.

-At the trade deadline on March 24, 1998, Vancouver traded Dave Babych to the Flyers for a 5th round pick. It is said that he wanted to be traded to a team that was a contender for the Stanley Cup.  A sad day that was, but Babych was becoming slower and slower. Unfortunately, there was no deep run for Babych with the Flyers and he retired from the NHL in 2000.

-July 1998: Jyrki Lumme became a free agent and signed with the Coyotes. Lumme's offensive production and ability to stay healthy more or less declined after his years as a Canuck. He would play 6 more years in the NHL with the Coyotes, Stars and Leafs before returning to Finland.

-On January 17, 1999, Brian Burke traded disgruntled hold out Pavel Bure, Brett Hedican, Brad Ference and a 3rd round pick to Florida for Ed Jovanovski, Dave Gagner, Mike Brown, Kevin Weekes and a 1st round pick in 2000. The final 2 active roster players from the '94 Finals were eradicated, just under 5 years later. In that span the Canucks made the playoffs only twice (1995 and 1996) and only played 3 rounds combined. From that point on the team got worse and worse until 2001 when they finally made the playoffs again for the first time in 5 years.

So technically Brett Hedican was the last surviving member because he was playing and not sulking. Hedican is the only player from the 1994 squad to win a Stanley Cup in the years after (Hurricanes - 2006).

It should be noted that Dana Murzyn never played in the 1994 Finals or Sem-Finals. He suffered a knee injury in Round 2 against Dallas. Brian Glynn replaced him. Murzyn retired after the 1999 season.

Seeing how several Canucks on that roster never played "full" NHL careers it just goes to show how much that group came together as a team in that playoff run. What a team it was. Skill, mixed with smashing grit and a super hero in Kirk McLean. I'll never forget it.