The Results are In: Who did we love and hate most?

Share All sharing options for: The Results are In: Who did we love and hate most?

So, we had a total of 45 voters vote on their favourite and most despised 3-5 teams, and the results are in.  After receiving some explanation, I figured out how to do basic Excel graphs, so those are below the jump.

Polling process:  Every 1st pick was worth 3 points, and every 2nd choice was worth 2 points.  All choices thereafter were worth 1 point each.  The love and hate rankings were kept separate, so there isn't any negative-positive cancellations.

Most surprising revelations:  Lots of love for Ottawa and Montreal, still lots of hatred for New York stemming from 1994.

Least surprising trend:  We love the Canucks and hate the Flames.

The rest of the results after the jump.

People we don't have any love for: Blue Jackets, Panthers, and Lightning all got no love.  They have no need to worry about it though, they didn't have anyone say they were hated either, so they're pretty much the neutral ones.

Popularity Analysis:  The Canucks obviously led this poll, so that was no surprise.  The Sabres and Sharks tied for 2nd at 21 points, with the Senators, Canadiens and Capitals all very close behind at 20, 18, and 17 points respectively.  Speaking of Canadian teams, the Oilers somehow made the top 10 with 11 points, which I find rather strange for a division rival.  Rounding out the top 10 are the Blackhawks with 10 points, and a tie at 9 points between the Flyers and Coyotes. 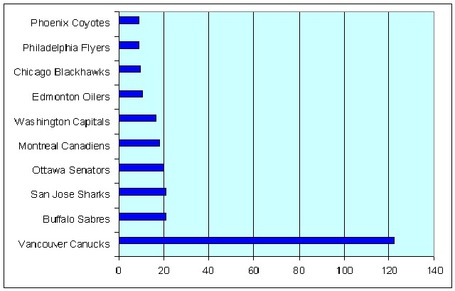 People we don't have any hate for:  Blue Jackets, Panthers and Lightning all got no hate again.  This time around, the Canucks, Sabres and Hurricanes also avoided criticism.

Hatred Analysis:  The Flames are very much hated, which is also no surprise.  The Blackhawks got 2nd with 39 points, with the Maple Leafs (38) and Rangers (35) very close behind.  The Red Wings (31), Penguins (19) and Avalanche (17) are next, while the Devils, Stars and Ducks round out the top 10.  No real surprises in here at all, actually.  Okay, maybe the Rangers, but that's just me who thinks it's unexpected since I was only 4 years old during that Cup run. 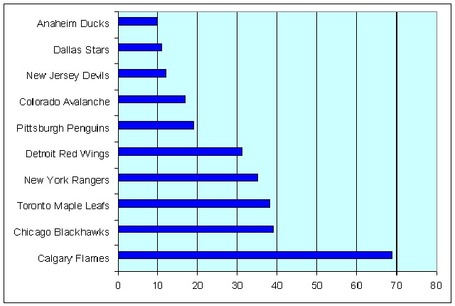 I must say, this was pretty cool to see.  Thanks to everyone for contributing their picks.   And now that 2 blogs have done it, let's see if anyone else follows our lead....