Where The Canucks Stand Heading Into The 2010 Free Agency

Share All sharing options for: Where The Canucks Stand Heading Into The 2010 Free Agency

It's about that time. The few days a year you hope your team puts some things in motion that will make you happy between September and June. At this time last year, Vancouver was close to losing the Sedins, a move that would have changed their entire team (and robbed them of their first Art Ross and Hart Trophy winner). They also didn't know if Luongo would be sticking around, but Gillis made sure the trio - along with that Kesler guy - aren't going anywhere anytime soon.

With the dust starting to settle on the biggest trade Gillis has made to date (Grabner/Ballard), it becomes more evident what needs to happen this summer. After the jump, we'll take a look at who's coming and going, where the holes are and what some of our rivals may be up to.

Salary cap space: $9,966,667
Projected budget: $59.4 million. Gillis will again be allowed to spend to the cap limit if not exceed it until the regular season starts.


Key needs: By signing Cory Schneider earlier this month, Gills solidified the back-up role left vacant by the departing Raycroft. Schneider will continue to be talked about as trade bait, so if that happens, Vancouver will be on the lookout for another cheap back-up as they have none in the pipeline.
It's possible (likely?) that Kevin Bieksa becomes a cap victim as you can't pay $3.7 million for a guy in the 5th slot. If they move Juice, another defenseman will have to be found. Another mystery will be the troublesome Shane O'Brien who may take the team to arbitration and potentially earn himself a swift kick to the ass right out of town.

With Demitra & Wellwood leaving via UFA - and Bernier and Grabner hunkered down in Florida - the Canucks have no one destined for their third line. It's probable that the Chicago series forced Gillis to shop for size and better defensive coverage, so he'll try and use free agency to fill those holes. Vancouver also needs a fourth line pivot to replace the likely departure of Ryan Johnson. Should Vancouver run into cap troubles along the way (which they most certainly will), they'll looks towards a handful of their notable prospects - Cody Hodgson & Jordan Schroeder or maybe Anton Rodin & Sergei Shirokov - to fill the holes, though they do not bring the size and experience Gillis wants. Regardless, many are eager for Hodgson to crack the roster and he'll be given every chance to do so.


Potential targets: Until Dan Hamhuis and Anton Volchenkov sign somewhere, they'll be linked to MG's mad dash at all things defense. Paul Martin could be another top pairing choice while potential secondary targets could be the likes of Zbynek Michalek or Jordan Leopold. It's likely they'll keep an eye on Willie Mitchell when he begins skating in July, but so will 29 other teams.
For the bottom six, a shutdown guy like John Madden or Manny Malhotra (who the organization rumored to have pursued last summer) could be targeted. Brendan Morrison has admitted to being receptive to another stint with the Canucks too. Arron Asham showed in the Cup Finals what he can do with limited minutes. If you want a full on rosterbation moment, you can go the Colby Armstrong, Lee Stempniak or Alexei Ponikarovsky routes. Matt Cullen has been bantered around in other NM posts and I'll toss out Matthew Lombardi to fulfill my man crush needs. Since our GM was fond of chucking so much money at Mats Sundin: Mike Modano is 40 years old and available at center. Just sayin'.

What our rivals want: The Avalanche need a top six winger and a top 4 defenseman with roughly $15 million in cap space to work with. Edmonton - with $15 million and change to work with - already picked up Colin Fraser but will be looking for another bottom six forward or two as well as another defenseman for the bottom pairings. The fact Calgary cut ties with Ales Kotalik may suggest the inmates aren't running the asylum anymore, but with about $6.5 million to work with, they need to find some bottom six guys along with a bottom pairing defensemen in addition to a back-up goalie. Could be a long summer for our friends in Cowtown. Lastly the Wild have $11.5 million to spend and also need to fill in some bottom six guys and lower-tier defensemen and need a back-up for Backstrom (Harding is a RFA). Heavy on their minds must be the health of Pierre-Marc Bouchard who missed 81 games last season struggling with a concussion but he hopes to be ready by training camp.

Check out Hockey Wilderness, Matchsticks and Gasoline, Copper and Blue and Mile High Hockey for more on the rest of the Northwest.
Big ol' hat tip to capgeek for their help with the numbers. Our scorecard for July 1st is below: 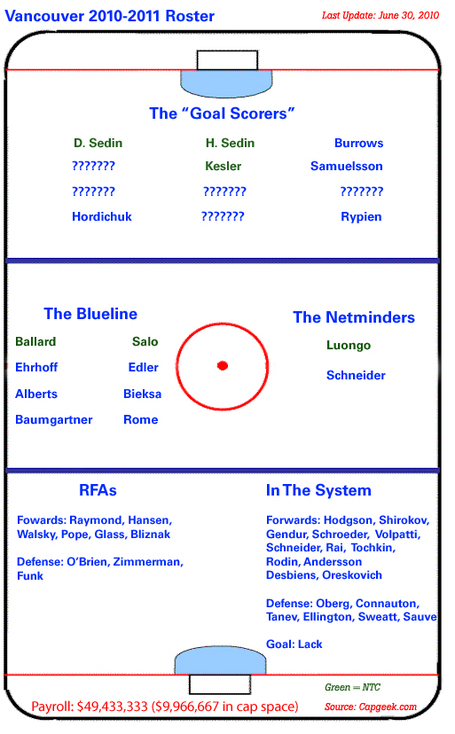