With the post season just about over, I figured a quick jaunt over to the dark continent was in order if - for no other reason - so I don't see Adam Burish lift the Cup.

In actuality, I've been planning this World Cup trip for 16 months. Odd to think it's finally here. With luck I won't come back maimed or missing a limb.

In the meanwhile I leave the lovely control room of NM over to Sean, Missy, Smo' and Waach (though I know he's out enjoying life for a change). I'll be back towards the end of the month, right in time for the awards ceremony, the entry draft in LA and of course the bedlam that is July 1. 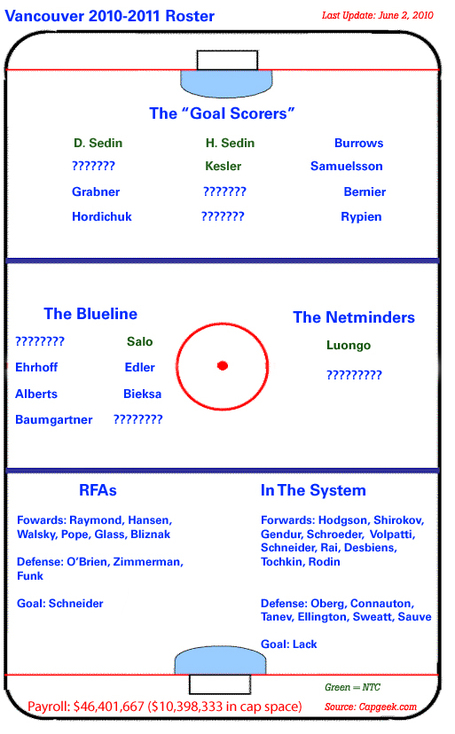 Those Mitchell and Raymond holes are just screaming at me. With Gillis signing four guys in the past week alone, is he stocking up Manitoba or preparing for a summer of house cleaning ahead? Considering I won't have internet access for the next three weeks, I wonder how much of this will change.

As for the draft, the White Towel has already been poking around at some options at the 25th slot. The last time the Canucks picked 25th was in 2007 and they landed noted dynamo Patrick White while passing on David Perron behind him so talent - and mistakes - are still possible deep into the first picks.

In the meanwhile, for those soccer fans in the house, here are the games I'm hitting up so feel free to watch on your lunch breaks (liquid lunches, please) and hope you don't see a little guy getting tossed out of the stadium on his head:

Enjoy the end of the SCF and the rest of your June folks. See ya soon.