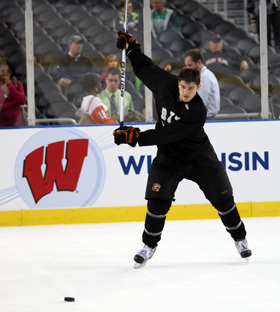 When the Canucks signed undrafted Rochester Institute of Technology defenceman Chris Tanev on May 30, many of us, including myself, wondered who in the heck this guy was. While we learned that Tanev was a late-bloomer size-wise, his fave player is Niklas Lidstrom, and he recieved praise from his teammates (follow the above link for more), I still wasn't quite satisfied. So when I saw a guy on Twitter who was from Rochester saying he was sad to see Tanev go, I decided to hit him up with a few questions.

(The following are the the opinions and views of Mr. Goldberg and do not reflect the opinions of Rochester Institute of Technology).

NM:  OK, first of all, introduce yourself to the Nucks Misconduct community: Who is your favorite hockey team? what do you do for work? How much do you watch the RIT Tigers?

RG: My name is Ron Goldberg and the Buffalo Sabres are my favorite hockey team.  I handle alumni relations for the College of Imaging Arts and Sciences at Rochester Institute of Technology (RIT) and am a 2 time alumnus from RIT.  I am a HUGE RIT hockey fan and have been a season ticket holder for 4 years and also saw every home game when I was a student at RIT from 1995-2000 when I sat in the infamous RIT Corner Crew.

NM:  On May 31st when the Canucks signed Chris Tanev you tweeted: "Chris Tanev signs with the Canucks.......hate to see you go!" In as much detail as possible tell us why you said that. How good is Tanev?

RG: When I tweeted about losing Tanev it honestly was a big disappointment for me.  Chris is a great player and with him being a Freshman last year seeing someone like him leave is a huge loss.  Chris led the team in +/- for the regular season with a +33 and was fourth in points with 28. As well, he had the highest shot percentage of the team with a .154. He has a great reach and stays out of penalty trouble with only 2 minors in 41 games. If he had a breakout year with these stats, there was only (hopefully) more positive things to come.

NM:  If you could compare Tanev to an NHL player, present or past, who would it be? C'mon man, get our hopes up!

RG: I would compare Tanev to Myers of the Buffalo Sabres, he is young but has a lot of potential and can score goals.  The only thing I believe that he needs to do is bulk up a bit, but that will come in time.

RG: At this point I can not pinpoint any major weaknesses for Tanev except he may need to bulk up a bit

to be able to compete in the NHL.  From the moment I saw him step into his first game at RIT I knew he had something special and was going to do well. In his first weekend at home last year he had a goal in the first game and 2 in the second game and kept moving forward from there.

NM: The Canucks signed Tanev to a 3-year deal. Do you think there is a chance that Tanev could make the jump to the NHL right away, or is some seasoning in the AHL in order?

RG: I think that Tanev will spend some time in the AHL and if he continues to play and improve he will move up quickly like Myers did through the Buffalo system.  In hocky anything could happen, but if Vancouver is looking for someone who may be able to make a quick impact, he may be the person of choice.  He definitely was a force to be reckoned with in the AHA this year.

Thank you Mr. Goldberg for answering the questions so promptly. I hope this helps everyone out in getting to know Chris Tanev. After reading Ron's responses, I'm pretty excited about this defenceman. Ron's Twitter page can be found here.