A Canucks fan's perspective on the Blackhawks Stanley Cup win

Share All sharing options for: A Canucks fan's perspective on the Blackhawks Stanley Cup win 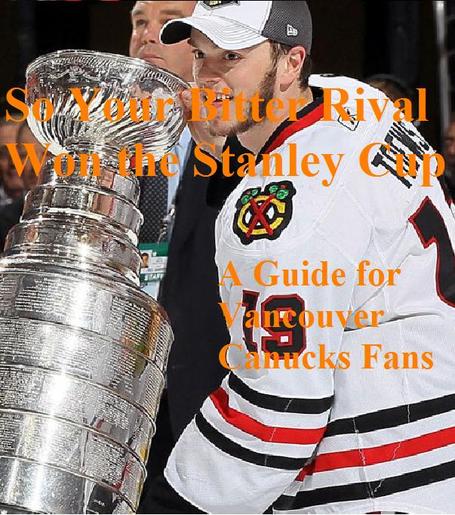 In case you are wondering what that is, it's Chelsea Dagger by the Fratellis (AKA the Blackhawks goal song) - an appropriate song for this morning, in light of the Hawks Stanley Cup win last night. So the Frat-house on Madison has its Cup. I'm happy in a way for guys like Jonathan Toews, Duncan Keith and Brent Seabrook. Patrick Kane? Not so much.

After the jump, what I consider to be the pros and cons of the Blackhawks win - from a Canucks fan's perspective.

Why I'm glad the Blackhawks won

Well, at least we lost to the eventual Cup winner, right? So losing in the Second Round is not so bad when you gave the Cup champions a tough, 6-game series which, in many ways, they were lucky to win, right?

Plus the Hawks' offensive outburst against the Pronger-led defense of the Flyers kinda makes our blue-line look not as bad, right? Am I right folks?

Okay, this is ringing a little hollow.Let's move on.

Why I am pissed the Blackhawks won

I hate the Blackhawks.

It's the product of back-to-back, bitterly contested Second Round series.

It's the product of so many punks - Patrick Kane, Ben Eager, Andrew Ladd, etc. - being on one roster.

It's the fact that this team is so talented and opportunistic that, despite their immaturity, they can be dominated for 50 minutes before breaking out and winning the game.

It's the fact that I honestly think the Canucks are a better team this season than the Blackhawks - but they weren't able to beat them. That is really, really frustrating.

So yeah, I am not too thrilled about Chicago winning the Cup. There's some very likeable players on the team (I especially like Toews and Keith) but they're more than offset by the punks. But there you have it - the Chicago Blackhawks are your 2010 Stanley Cup Championships.

But hey, we'll see 'em in the Second Round next year, right? And third time's the charm, right? Am I right folks?