Snake eyes in heaven, the beast in your head: Canucks & Hawks, Game V

Share All sharing options for: Snake eyes in heaven, the beast in your head: Canucks & Hawks, Game V 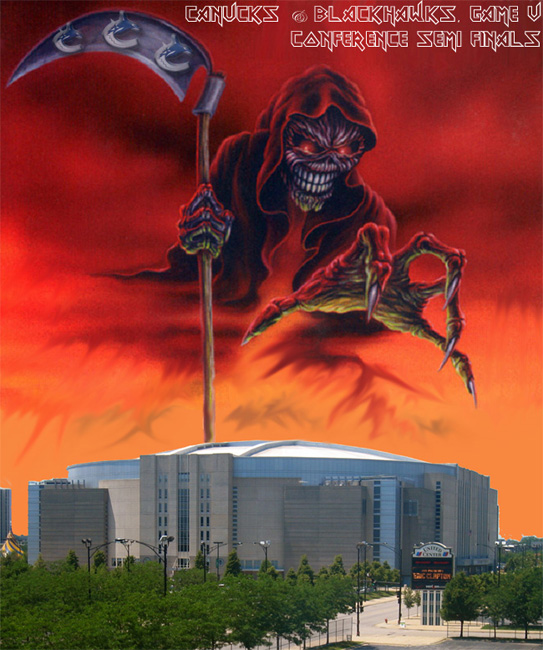 By the rules and stipulations of the beleaguered fan mandate passed in the year of our lord 1970 and the amendment acts of 1982 and 1994 hereto attached, I am obligated to openly question if Alain Vigneault has any Tony D'Amato, General Patton, Herb Brooks (esque), coach Taylor or coach Dale in him; failing that we'd also take Bluto, President Whitmore or something Ryan fucking Walter used to sell. As a last resort any of these would work too (even has Free Willy and Sloth from Goonies, a double win).

The last stand has arrived, a bit more quickly than we had thought. That graphic above is either prophetic of a comeback which few can imagine or just incredibly apropos for the visitors. I suspect many a Vancouver hater out there are loving this and the good news for them is a loss tonight - hardly an original idea - is going to kickstart an absolute shitstorm of a summer. You thought the dogpile of the last two summers was bad? Brace yourself.

But let's not walk the plank yet. Crazy things can happen at 3-1 deficits and it's going to take some strong performances against a team that has beaten them in every way, pure and simple. The potential game changers remain the same: ES prowess, the fight for good scoring chances, PP relevancy, overall composure, Edler or O'Brien remember they're paid to be NHL defensemen, etc - but now there's more now. Can they respond to the adversity they're staring at like the Habs did in round one? Tough to tell.

Sixty minutes remain where a lot of positives can be shown. They have the talent in the room, but do they have the backbone, the intestinal fortitude and the ability to - above all else - sacrifice and keep their minds focused on the game? If they can, nothing is over and a game six is within reach. If they can't they deserve to reap the whirlwind. Period.

Time to see what the threat of no tomorrow looks like.

Gamethread on. Fuck that too.