Honey it's getting close to midnight: Canucks & Hawks, Game IV

Share All sharing options for: Honey it's getting close to midnight: Canucks & Hawks, Game IV 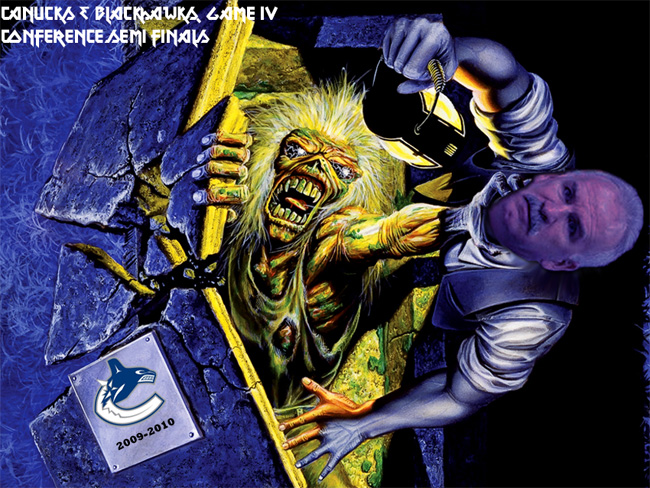 This is pretty much it. We can pretend going back to Chicago down 3-1 still means a glimmer of hope remains but if Vancouver can't make a statement tonight - at home against this team after the car wreck that was game three - than this just isn't their year (insert historical failure jokes right around here). It's a must win.

Hawks just have to keep doing what they're doing. The Canucks, rather, have a few wrongs to right. Vigneault needs to prove his worth in getting the best out of the rank and file as well as the heavyweights. Quietly shuffling Demo away is a good start - putting Grabner in is even better - but none of that will mean a damn thing if they can't stay composed. Playing the retaliation game is akin to an own goal so get Zen-like. Find your inner Buddha. Downward facing dog, all of you. Don't take the bait.

And Luongo? Not sure what to tell you buddy. The overworked defense will be too preoccupied with the bedlam around you to help with many of those loose pucks, so either gobble them up or risk getting sat on to clear it yourself. Sacrifice baby.

The trek ahead is steep but nothing is lost. Just leave it all out on the ice and even this up.