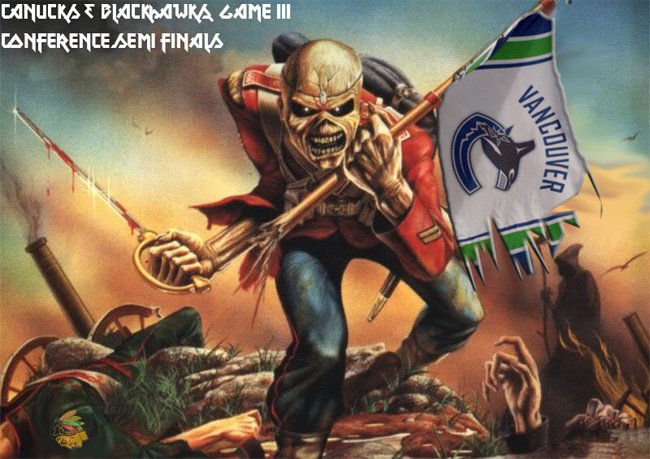 It's been a tale of two Vancouver teams so far: the first outworked and finished their chances en route to a laugher. The second started similarly but then backed off their opponents, couldn't get anything going at ES or on the PP, failed PK 101 in the third and may as well lump in a short blocking fail on the game winner. Perhaps that's too much in the weeds, but we know better than most that hanging on for dear life won't get you far (see Red Wings, Detroit). When you have a chance to drive the skate through their throats, never hesitate. At least Luongo is showing up, time for the guys in front to reward him.

I don't care who is playing on what line, I don't care how AV schemes to get the Sedins out against Campbell/Hjalmarsson or Hendry/Sopel (ok, I sort of care) and I don't care what Burish's latest skirmish with the english language is. Despite the media's best efforts, this isn't 2009.

What we need to see is another solid 60, the defense rebound from game two and pressure that rapist in net. He's already been hooked once and we left him alone for vast stretches on Monday. He'll cave if rattled and start handing out rebounds if the pressure is sustained. I love it when a plan comes together, don't you?