The Flyers Don't Have A Chance! Oh Yeah?

Share All sharing options for: The Flyers Don't Have A Chance! Oh Yeah?

I have been reading it everywhere, including this site that some people are not giving the Flyers a chance in hell to beat the Blackhawks in the Stanley Cup Finals. While I think the Hawks are going to win as well, I still believe that anything can happen and especially that the Flyers are not to be underestimated. I could write a 10 paragraph essay on this but I'll spare you. I'll keep it in bullet-form..sort of...

-The West is much better than the East argument. Well this year that may be the case, standings-wise. Montreal and Philadelphia squeezed into the playoffs this season and only needed 88 points to do so. Philly was a shootout goal away from not making the dance. The Avalanche easily attained the 8th spot in the West with 95 points, 5 points ahead of the 9th place Blues. Yeah yeah. That was the regular season. The playoffs are a different ball game. A big difference? The Flyers were projected to be better than a 7th place team before the season started. So what the hell happened?

-a good start followed by an identity problem..or 2....or 3..... In the month of October, Philly went 6-4-1. After going 6-1 from November 2-18 all hell broke loose. The Flyers lost 6-3 to the Sharks in San Jose on November 20th and proceeded to win only 1 game in their next 7. After the Canucks beat them 3-0 (their second shutout loss in row) on December 3, head coach John Stevens was fired and replaced by Peter Laviolette. Laviolette's first game behind the bench was a disgrace. The Flyers lost 8-2 to the Capitals mostly due to undisciplined play. The team acknowledged it and Mike Richards even publicly put the heat on Daniel Carcillo to smarten up. That did not translate into wins. Philly went 2-6-1 in their next 9. A playoff spot looked bleak. But then they went 11-3-1 in their next 15 dating up to January 23, and then 6-4-0 heading into the Olympic break.

When regular season play resumed the Flyers were mediocre at best, finishing 9-10-3 in their final 22 games. This is how they got into the playoffs.

Yeah, thanks Jokinen. Enjoy the KHL. And thanks NHL for giving teams the extra point for the shootout. Coach Laviolette was trying to drill into these guys' heads to play his patient system and it would work out for them. Well, the team finally bought into it.

-Philly outscored the Devils 15-9 and beat them in 5 games in Round 1.

-When all hope looked dead against the Bruins in round 2: down 3 games to none, tying the series to force a 7th game, down 3-0 in game 7; the Flyers showed insane resiliency to overcome the deficit and become a part of history. It was a beautiful thing, admit it.

-Let's face it, the true Cinderella story of the playoffs were the Canadiens, not the Flyers. Backed by Halak, a red hot Michael Cammalleri, and solid defence they trounced the 2 teams most picked to get to the final 2 in the East in the Penguins and Capitals. Well Philly had an answer for that. They outscored Montreal 17-7 to take the semi-final series in 5. They zeroed in on Cammalleri and neutralized him, while making Jaroslav Halak look human in the process. That mostly, is Peter Laviolette's system. And so far it's working because the players are buying into it.

-Adversity. The Flyers have had a heap of it this season and in these playoffs. Yet they persevered. They lost Ray Emery in the beginning of February, and then Michael Leighton in mid-march, so they had to play the long-forgotten Brian Boucher. He finished the season with 5 wins and 11 losses. But something happened to his psyche in that final game of the regular season shootout win over the Rangers. His confidence soared. He was solid in the series win over the Devils. 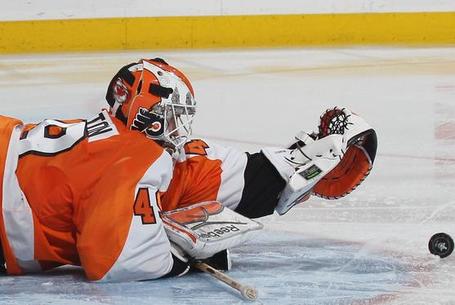 However, at the time he got injured early in game 5 against the Bruins, when they were down 3 games to 1, Michael Leighton stepped in and became a wall. But that was not the only injury issue facing the Flyers. They, up to that point, were playing without Simon Gagne and Jeff Carter as well. To put it into perspective, Gagne scored 20 goals and 48 points in 80 games this season while Jeff Carter scored 33 goals and 61 points in 78 games. They had a combined 14 power play goals this season. That is a serious chunk of offence lost when they were out, yet the team still got the job done.

Yes, adversity . How much of that have the Blackhawks faced lately? Almost nothing. They have remained fortunately healthy and even gotten lucky on so many occasions during these playoffs and beforehand. (Yes, their skill and ability to capitalize on chances works too, of course.) By the way, Jeff Carter has 2 goals in 2 games since his return to the Flyer's lineup. Both goals came in game 5 against the Habs. Since Gagne returned in Game 5 against the Bruins, the Flyers are 8-1 while Rhymin' Simon has 7 goals and 1 assist in that span.

-The Nitty Gritty. In these playoffs:

-Let's break down the scoring depth, since I keep hearing the Hawks are a deeper team:

Points from the defence:

Seeing a trend? Of course, those are not "set lines" but that doesn't really matter does it?

There is no depth issue for the Flyers. Not on paper and not in the statistical category. They actually hold the advantage. The Hawks do have home ice advantage, yes, but they still have their work cut out for them.

-I'm sounding pro-Flyers aren't I? Well, to be honest, I don't care who wins this series. I just hope it goes the distance. But what I refuse to accept is people basically guaranteeing a Chicago win. It can go either way. A crucial injury here, a goalie that deflates there.....a team that loses it's composure.....

The Flyers may come from the Eastern Conference but don't give me this West is best crap, not in the Finals. You can spoon feed me that if the Hawks win this series in 4 or 5 games. But until then...anything can happen. The Flyers have earned this Cup Final appearance. What we have here are 2 healthy, physical, well-coached teams going head to head and quite frankly I cannot wait to watch it.