A Bit Of Squid - Zany Style

Share All sharing options for: A Bit Of Squid - Zany Style 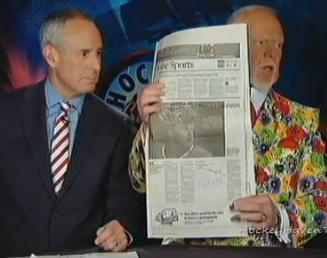 Missy may be cooking up something else at the moment so, without her knowledge, (haha) I'll throw some links your way for today.

-James Mirtle felt Grapes' wrath yesterday on Hockey night in Canada for posting a piece about the rise of European goaltenders, and that 3 of the 4 starters in the semi's are European. Cherry went on a bit a tangent talking about "they are bragging about that.....and this is a Canadian paper...etc." you know how Don gets. He then quickly mentioned that 23 of the 24 players who have scored in the semi's are Canadian/North American, blah blah. Mirtle wrote a response today that is really worth a look. It's not something to get worked up over. Don Cherry has a Canadian flag stuck up his ass. We all know that. I think it's comical and fun. Mirtle gets more exposure. Everyone is happy.

-We've already addressed the issue now the Province is: What now for Mason Raymond?

-It is being reported that LA Kings' assistant coach Mark Hardy is being arrested for a sexual assault charge. (The Province)

-The Penguins, according to sources are not going to trade Evgeni Malkin.

-Jonathan Toews has scored at least a point in 11 straight games. That ties a Blackhawks record with Stan Mikita. "Don't overwhelm me" said Toews.

-For the Flyers: Ian Laperriere will likely play in Game 4 while Jeff Carter is probable for Game 5. (TSN Ice Chips)

-The Red Wings' players and coach believe that 40-year-old Niklas Lidstrom will return for another series. (The Fourth Period) That's old news.

-The IIHF issued an apology to Sidney Crosby over an article that appeared on their website that singled Crosby out (and generally others) about disgust that these players aren't coming to Europe to play in the IIHF Championships after the playoffs are over.