Share All sharing options for: The killer's breed or the demon's seed: Canucks & Hawks, Game VI 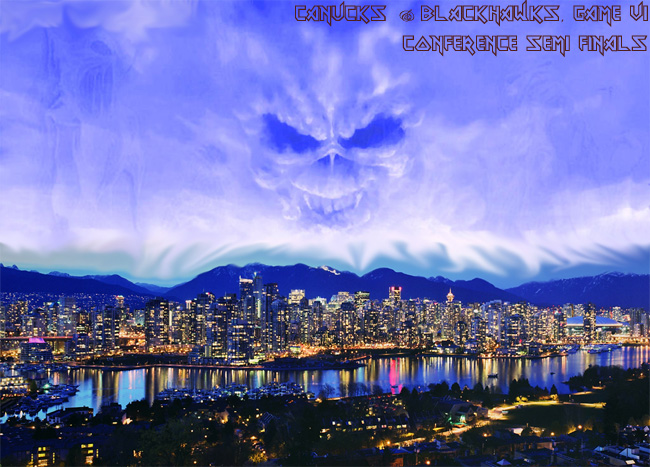 Being home hasn't been kind to the Canucks this round, but then that's been in short supply all season. Kindness, I suppose, is for golfers.

Many in the media (those with big brains and family values) continue to present this series as one where both teams beat themselves up. Chicago in game one and Vancouver in game four are prime examples. Chicago was better at exerting their talent in games three and four. Vancouver outchanced them and used short shifts and a fake forecheck is (Kane said it, not me) to win game five. You have to wonder what San Jose thinks seeing two teams - one more so than the other - become inconsistent and so frustratingly vexing at times.

But who cares? Here we stand in another precarious do or die game six against the Injun's. If Vancouver loses, all the same doom and gloom from 48 hours ago will still be included in their eulogy of another failed season. But the Hawks? Packed and ready for the Sharks, they want no part of returning to Chicago and making this a sixty minute series. Imagine the elevated heart rates in the Midwest if Vancouver is diligent, stingy and resolved in their own barn for a change and make this series last a couple more days.

An APB has been put out for the Sedins and Sammy, but tonight is about the backend. Without Salo (honestly we should be ecstatic he lasted this long), they are down to precious little experience shared between their new top four of Juice, SOB, Hoff and Edler. All have played the shit-eating dog at some point this spring and even if Salo nuts up and returns, the threat remains that if the Hawks move the puck with purpose and catch our blueliners twisting in circles, it could get ugly fast. Game four ugly. Along with the Captain, the backend will need to be stellar. No way around it - some magic in the back, a hero up front and a game seven on deck.

Reap the whirlwind another day gentlemen; we want a complete effort, a shocked group of guys in red and a return ticket to O'Hare.

Your army is behind you.