So It Begins...Canucks-Blackhawks Game 1 Preview

Share All sharing options for: So It Begins...Canucks-Blackhawks Game 1 Preview

Update (3:28 PST): The Canucks will go with speed over muscle tonight. Jannik Hansen, Michael Grabner and Rick Rypien will play on the 4th line. I'm in favor of this. Aside from that, remember this goal by Hordichuk against the Hawks last post season?

-Watch for a guy named Bryan Bickell. He's a tough guy playing on the top line with Kane and Toews. He'll be crashing the net as well, and basically being a bodyguard for his wee little buddies. (Chicago Sun-Times)

-Only Anton Volchenkov and Hal Gill have more blocked shots than Brent Sopel does. Like it or not, we'll be seeing a lot of Soaps. (CDC)

-Aaron Rome is ready to go, but Canucks will play Andrew Alberts instead. (BotchonCanucks- Twitter) Pfft??

-Hawks think they know how to slow down Sedins. (The Province). I believe they are correct, but even so, Canucks are going to need a lot from lines 2 and 3.

-Don't ask Lou if the United Center intimidates him. (The Province) What Lou should have said to that reporter was: "Here's what I want you to do. I want you to take that microphone and shine it up real nice. Then I want you to turn than sumbitch sideways and stick it straight up your candy ass, jabroni!"  Some of these reporters, I tell ya. Enough with the stupid fucking questions already. Is it 5:00 yet?

-Canucks are 6-1 in game 1's on the road dating back to 2003. Just saw that on TSN's scrolling marquee. Huh. I'm 1-6 when petting someone's dog that's tied to a sign post while the owner is in the store. Never a good idea.

-These are getting old, but still...

Here's the last time the Canucks won a playoff game in Chicago: 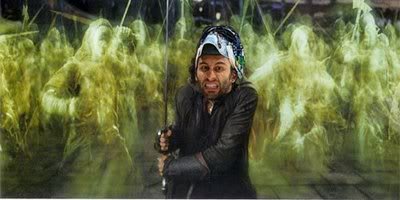