The waiting is over.  The awkward interviews with reporters trying to stir up even more animosity and create stories out of insignificance are done.  Beware, Chicago.  The Invaders are coming...

Raping and pillaging
Robbing and looting the land

Ah yes, game 1.  Finally, most of the gamesmanship will cease and this battle will be fought more on the ice than on the internets.  The Canucks have had some time to heal some of the bumps and bruises from a tough series against Los Angeles and are ready to take on the Blackhawks in the second round for the 2nd consecutive year.

Tonight we will see that being in Luongo's head only apparently applies to a couple games, the rest of the season he damn near shut the door on them.  We'll see that people are far too concerned about a certain marginally talented, fat-assed forward/defenseman, who by his own fan's admissions is inconsistent.  We will see a rivalry that, while it was certainly pushed by the media definitely exists, no matter what certain mullet-sporting midgets might have to say. 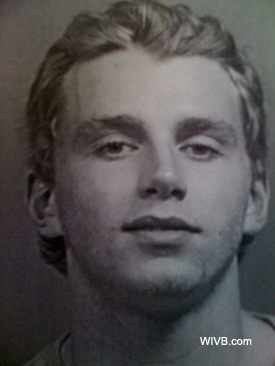 Nice mugshot, by the way.  I'm not going to sit here and yap about how the Hawks aren't good, use the term suck.  I will leave that to their fans.  Later in the series, I will introduce you to my favorite Hawks fan.  He's a special little guy, and I am taking him under my wing, so to speak.  Possibly organizing a telethon, but I don't want to say too much right now.  No, this Hawks team is very, very good.  They remind me in a lot of ways of the Edmonton Oilers at the start of the 80's.  With the nucleus of their team in place, this team began to run roughshod over a lot of teams.  They were young, skilled and exciting.  They were also arrogant, brash and disrespectful.  The air of entitlement that wafted around the team that had accomplished nothing was nauseating at times.

Yes the individual awards were there, but this team wasn't going to accomplish anything without first facing the kind of adversity and heartbreak that builds champions.  In the 1982 playoffs, that karmic slap in the face came when they didn't take their first round opponent seriously.  The Los Angeles Kings stunned the hockey world when they defeated the Oilers 3-2 in the 5 game opening round series, highlighted by The Miracle On Manchester: The Kings came from a 5-0 deficit in the 3rd period to tie it with less than 10 seconds remaining, then win in overtime.  That was game 3 of the series, and even though they would tie it up, the Oilers eventually fell to the Kings.

The disappointment they felt from letting a series that was supposed to be a cakewalk for them was devastating.  They used it to fine tune their game and the next season went to the finals, losing to the Islanders as they claimed their 4th consecutive Cup.  They would meet again the following season, and the Oilers would have their Stanley Cup.  While they may not have as talented a team as those Oilers (no one ever will again) the similarities are there.

There was no bitter disappointment for the Hawks when they lost in the Conference finals to Detroit.  They weren't supposed to be there.  The Canucks were picked by many to take a run last season, and we all know how crushing that defeat was.  I guess to a lesser extent, the Canucks were a bit cocky too.  The celebrations after crushing the Blues in 4 straight were a little overboard.  The aftermath of last year's disaster shows in the Canucks this year.  The more workman-like approach to the game, the triumphing over adversity.  Hell, they had the most brutal road trip in NHL history, and when many predicted it would destroy them, they stood triumphant atop the division.  This time however, they know that means nothing.

Many of the Hawks fans do not respect our talent.  They certainly do not respect our goaltender.  I prefer this.  Let them find out the hard way.  Another great lesson can be learned in all this from the Penguins.  After making it to the finals, they lost in 6 games to Detroit.  They, especially Sidney Crosby took that and used it to strengthen themselves, getting their shot at revenge and making the most of it.

The time for revenge is at hand my friends.  They don't fear us.  They mock us.  And they think this series is a foregone conclusion.  They are wrong.  The invaders are coming.

Not at all shocked by that game in Pittsburgh last night.  Between a goalie that looked burnt out, and a team that has scouted out the Canadiens very well by all appearances, and adjusted to changes the Habs threw their way, the Penguins cruised to a 6-3 victory over Montreal.  Going a perfect 4 for 4 on the power play certainly helps, but both teams did suffer potentially damaging losses, the Habs' Andrei Markov and the Pens' Jordan Staal both left the game with leg injuries.  No update on how serious either injury is.

The Flyers and Bruins get things underway shortly (as of press time) and this series looks to be a throwback between two teams that had a bitter rivalry in the 70's.  Both teams have hot goalies, the Bruins have struggled to score all year, while the Flyers have been decimated by injuries to key players.  Something has to give.