You don't have to live at the top of the reef to be somebody: Canucks & Sharks

Share All sharing options for: You don't have to live at the top of the reef to be somebody: Canucks & Sharks 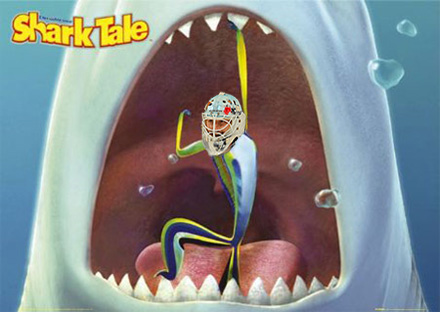 At long last, the final road game of the regular season. San Jose is gunning for the #1 slot whereas Vancouver will be (a) resting their better goalie and (b) resting their best defenseman on an already (c) depleted defensive unit in a game where (d) it doesn't matter whether they win or lose. So Raycroft (as seen above in pregame warm up's) is basically screwed right? Might as well just give the Sharks the points now and stop wasting everyone's time right?

In actuality, the Canucks have said - almost to a man - that they need to get back in sync and have two games to get that done. What makes tonight vital is that the Sharks are great and the Flames are, let's face it, a barrel full of monkeys rolling down a hill. Tonight is Vancouver's final big test before this shit counts and that, more than convention wisdom suggests, is why you should expect a solid effort. Just don't be shocked if most of the game is played in their end. (But of course you wouldn't be shocked, you good looking Vancouver fan you.)

Honestly if they can sleep walk through the Avs game and take that to OT, they can take the Sharks. Period.

I am the Panama Canal, baby! From now on, everything flows through me.